10 Rare Succulents and Where to Buy Them

If you think you’ve had enough collection of succulent plants, think again. There are some pieces that are quite uncommon and difficult to find. Raresucculents are a real thing and we suggest that you start looking for one now.

Plantly collated the ten rarest succulents in the world and the places where you can possibly find them. Let’s try our luck. Ready? Here they are:

10 Rare succulents in the world 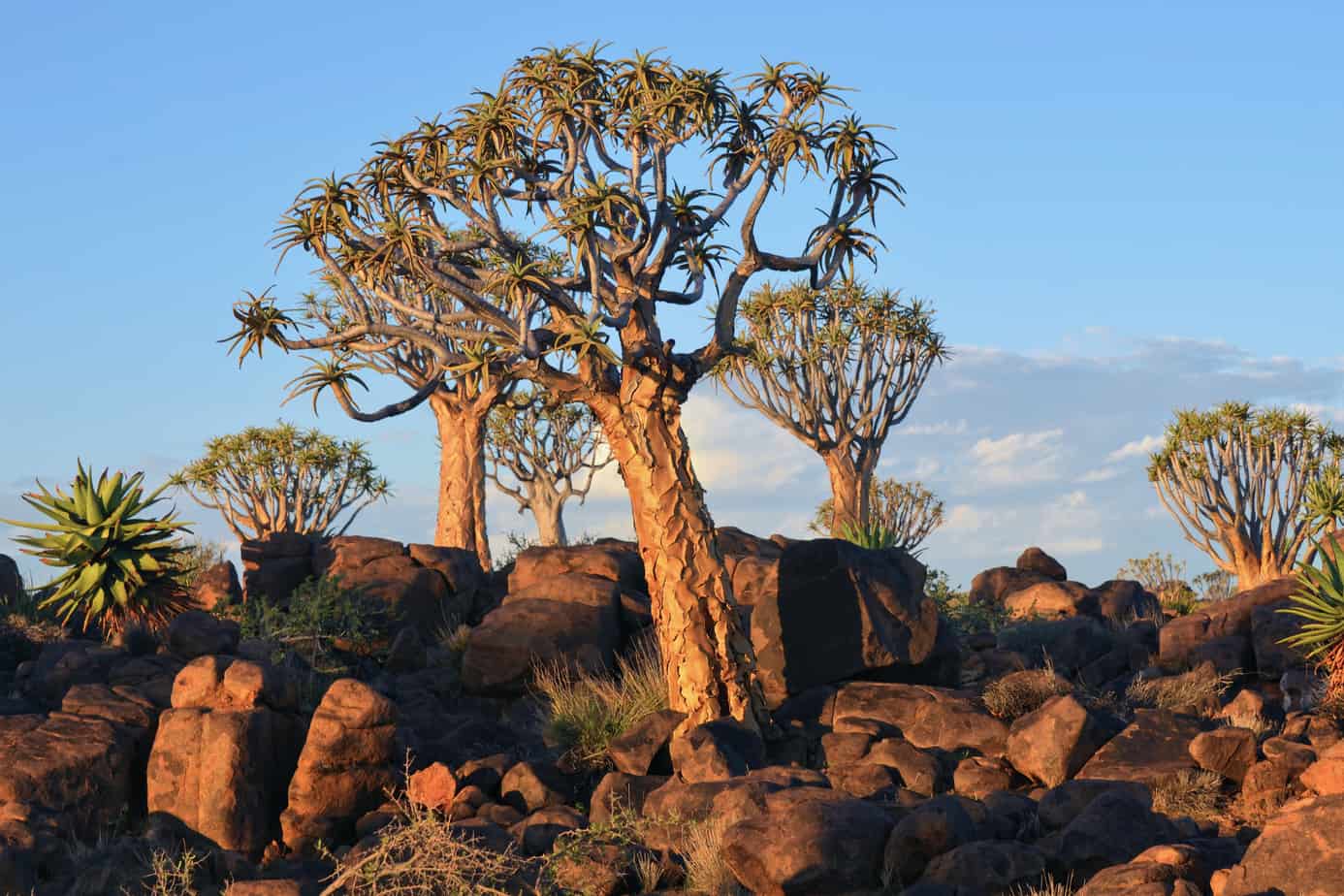 The tree can reach up to 10 to 15 meters high. The trunk looks like a pillar and is adorned by golden bark while the leaves are pale green. The flowers produced are yellow. 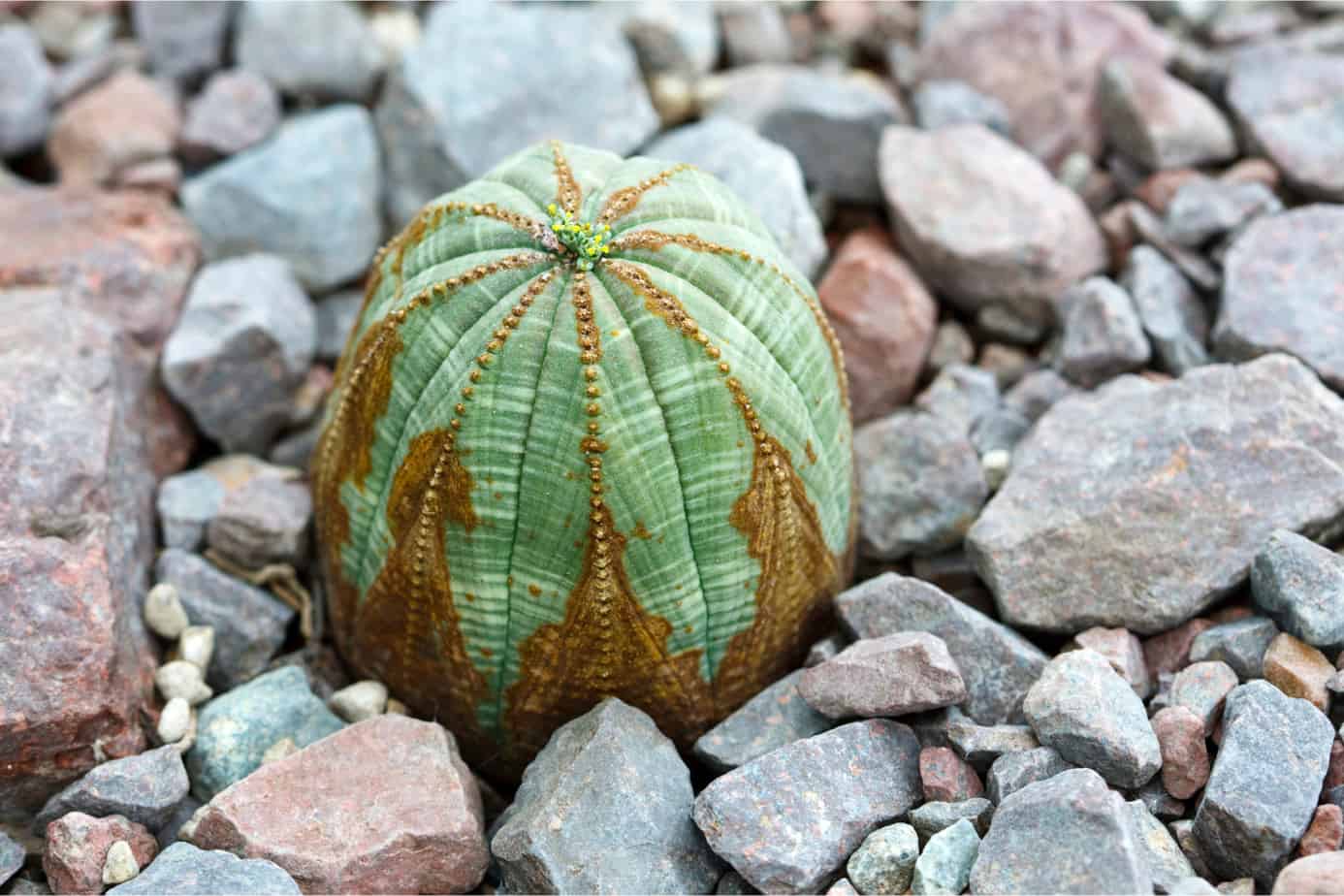 Euphorbia obesa or the baseball plant is another native of South Africa, specifically in the Cape Province. As its name implies, this succulent has the shape of a baseball. Initially, the stem is stout but becomes cylindrical as it ages.

The distinctive part of this plant is the horizontal red-brown or purple bands around its stem. It also has those seam-like ridges that are similar to stitches. Due to the uncontrolled harvesting of this species from its native habitat, it’s now considered an endangered one. 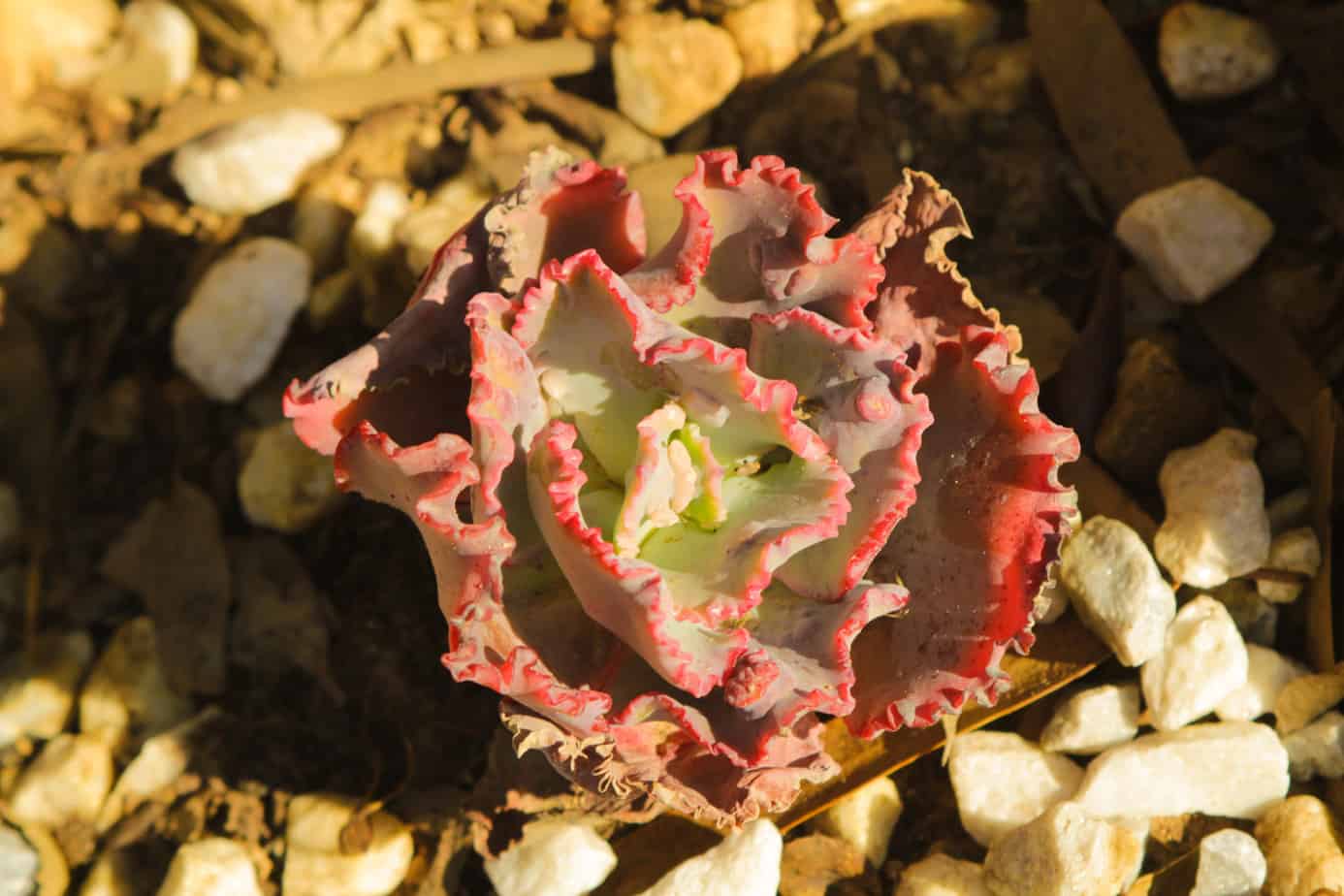 Barbilion is one of those unique succulents because of its texture. One glance and you’ll see that it has fleshy leaves, very much like that of a fowl’s wattle. It’s a slow grower forming a rosette structure with that carunculated foliage.

What makes this plant more interesting is its ability to change colors depending on the prevailing season. It may grow in areas under USDA Zones 9b to 11b. 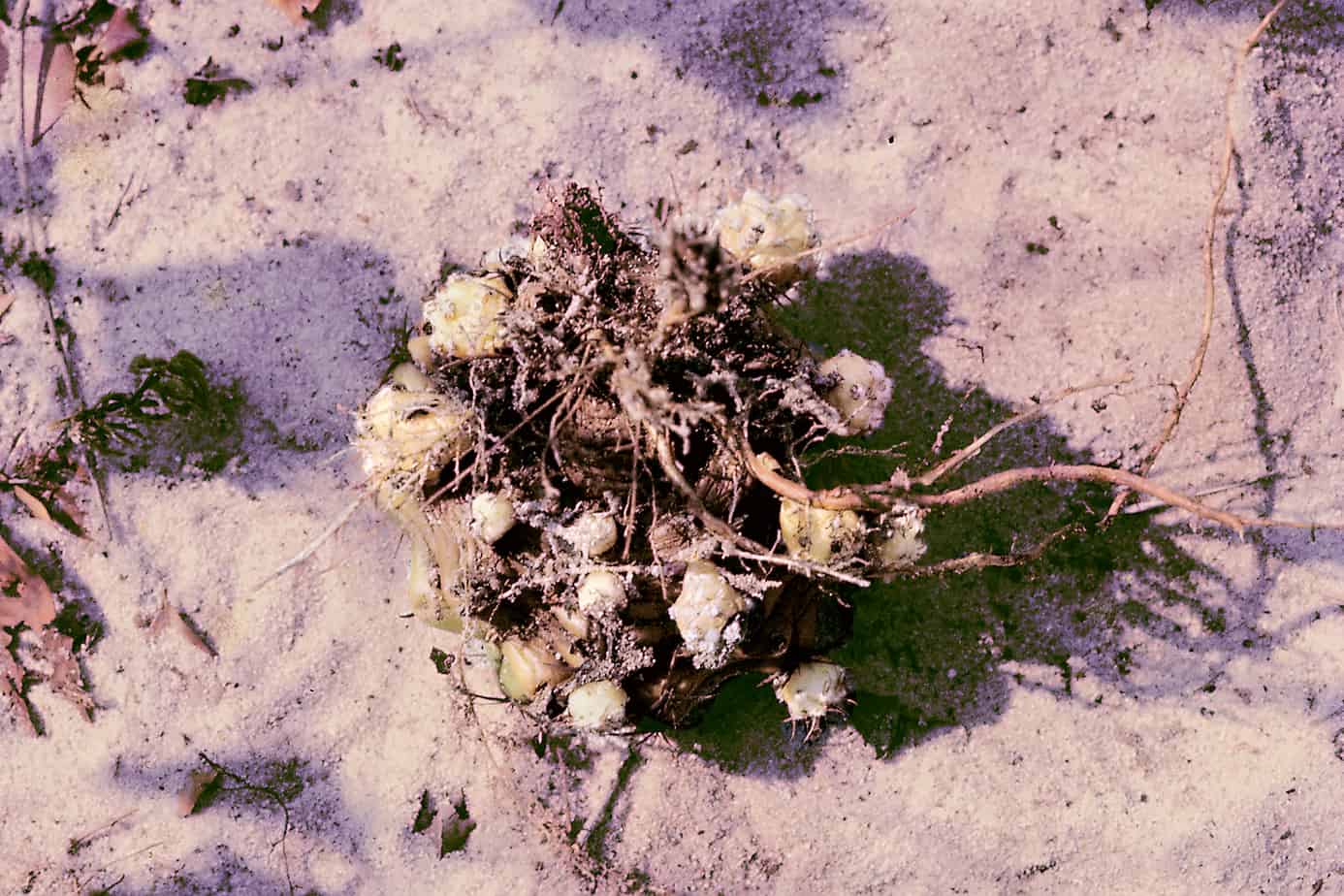 Because of its rare nature, the disco cactus is also considered an expensive succulent find. A native of Latin America, it is believed that this species has already been extinct in its natural habitat. This is due to cattle ranching and other agricultural activities.

Although not much is heard about Discocactus subterraneo-proliferans, it is described as having a sphere shape body and spikes around it. 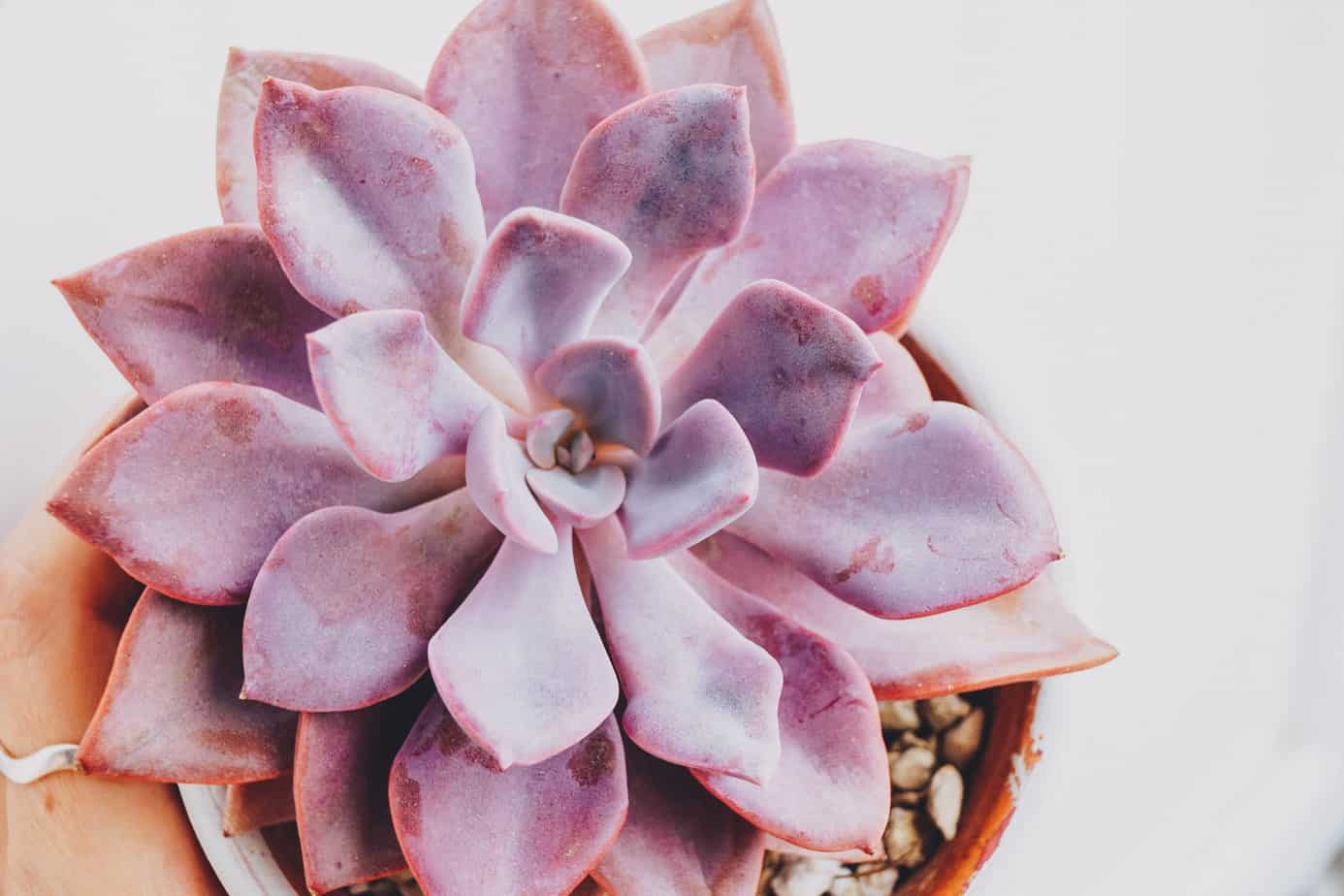 Topsy Debbi is a hybrid of Echeveria runyonii ‘Topsy Turvy’ and x Graptoveria ‘Debbi’, hence, its name. Others call it Lilac spoons because of their spoon-shaped leaves that have a tinge of lilac, grey color coated with white powder. As the season becomes cooler, those colors become more prominent.

Although considered rare, this species is relatively easy to care for. 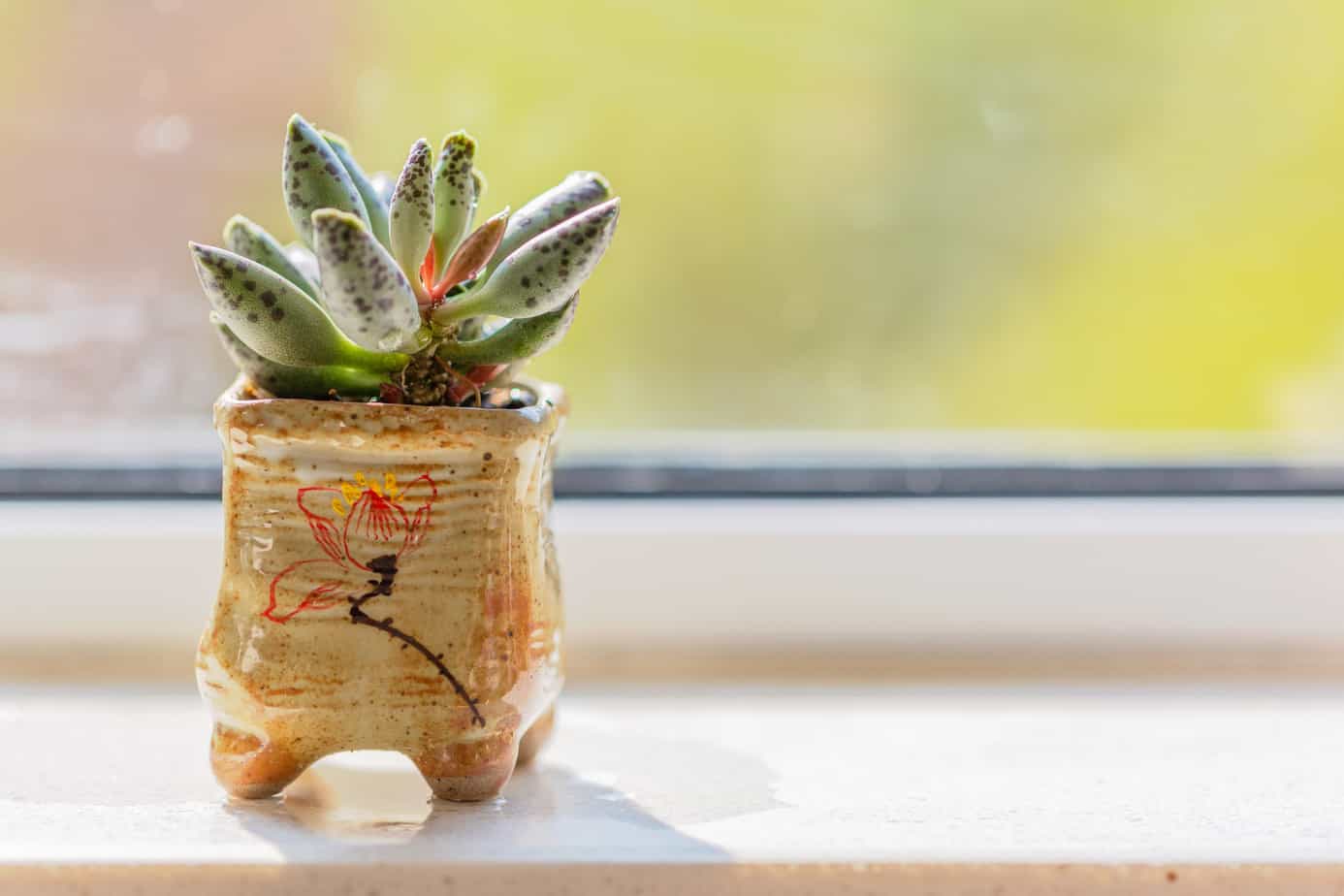 Plover eggs are botanically known as Adromischus cooperi, another rare succulent plant. This little jewel grows only up to 4 inches (10 cm) tall. However, with age, it creates interesting structures resembling the appearance of a small tree. The fleshy leaves are speckled with red color, making it look unique and interesting.

Like most succulents, plover eggs require very little watering. It thrives best with the soak and dry method, leaving the soil completely dry before watering again. 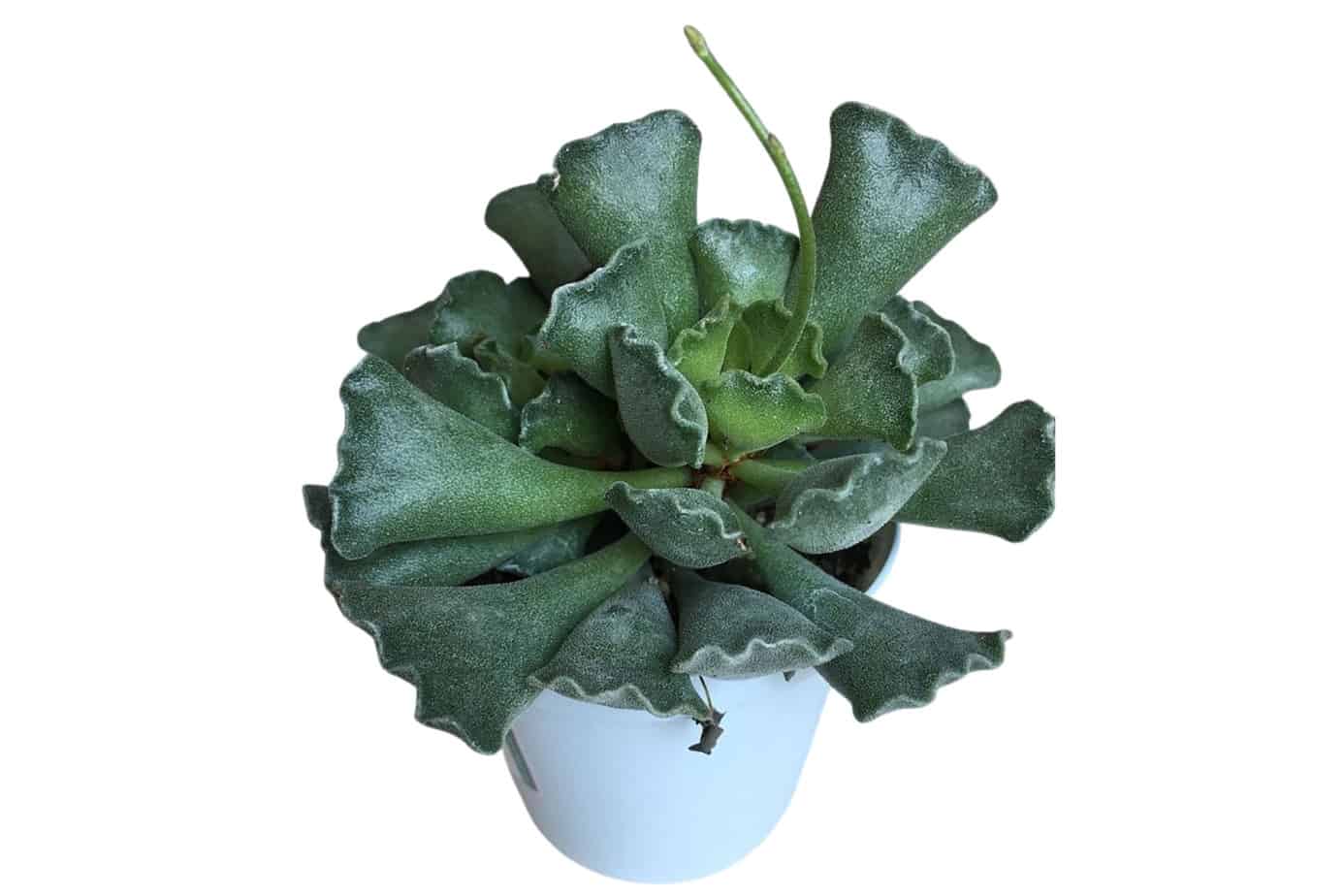 This plant has an interesting leaf structure. It follows a triangular shape but the end of its leaf forms a crinkle. Others call it by the name Key Lime Pie. Botanically, the crinkle leaf plant shares the same genus (Adromischus) as the plover eggs plant, thus, you’ll observe the similarities. Both have the same thick leaves.

During spring, the crinkle leaf plant produces small, tubular flowers that are reddish-white. You can place this plant in areas with full to partial shade. 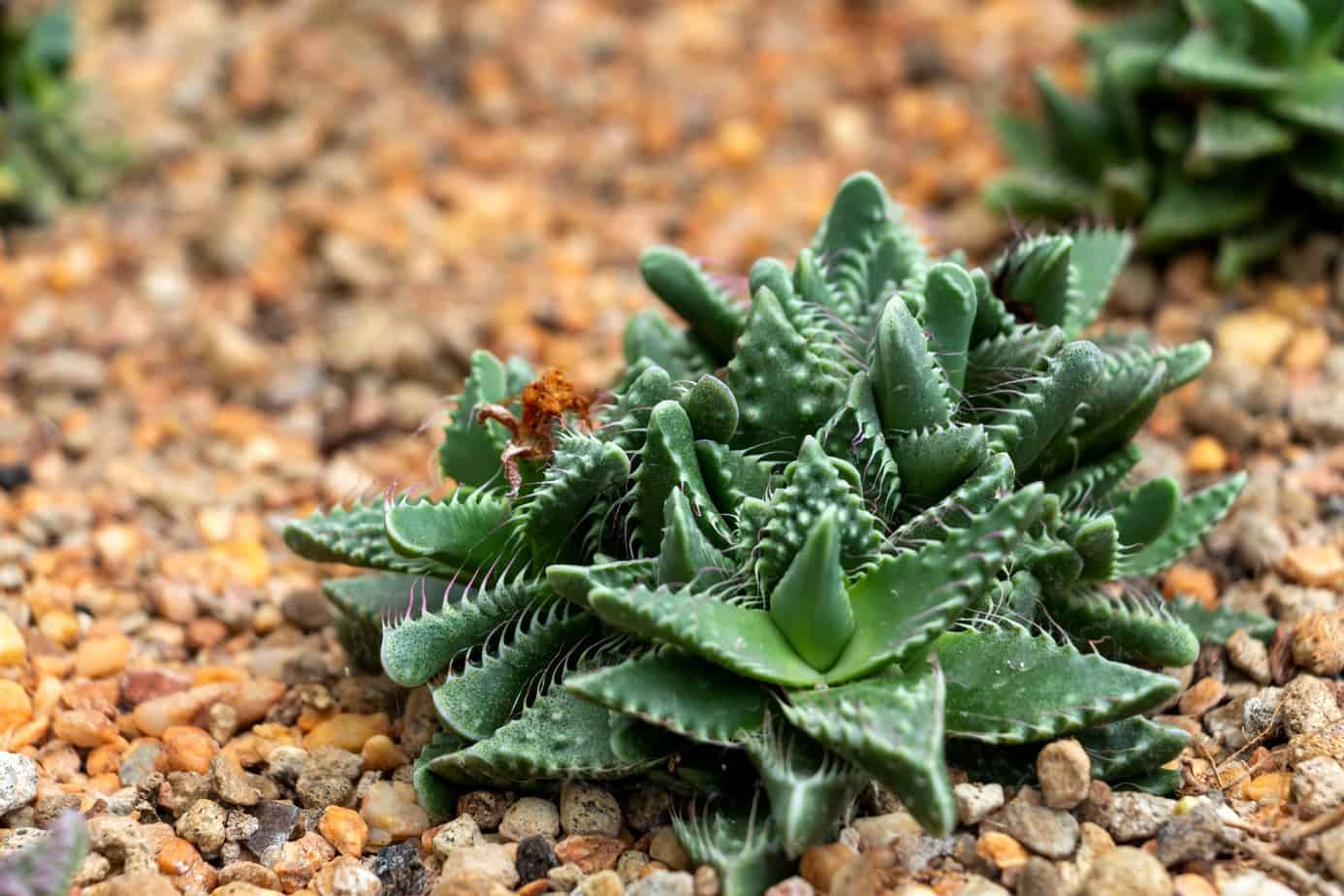 Pebbled tiger jaws are a beautiful succulent but a rare one. Also a native of South Africa, this plant looks like a living rock cactus. It forms a clump growing up to 6 inches tall. The leaves of pebbled tiger jaws are dark green and splashed with whitish dots on the surface.

What makes this plant even more attractive are the daisy-like flowers it produces creating a yellow center in each clump. 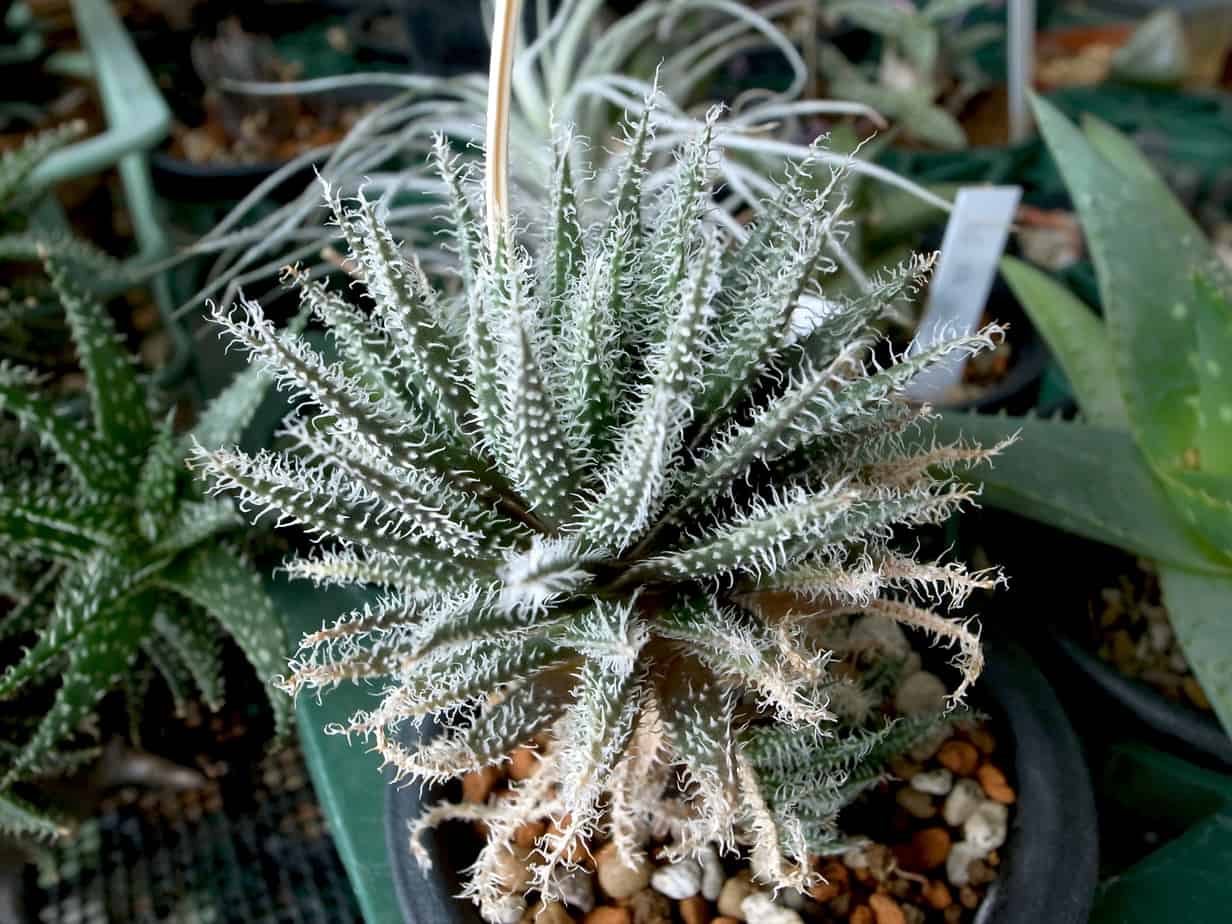 Aloe hawthoroides is just like a smaller version of your common aloe. In the same way, it gives you that Haworthia vibes with its appearance with that dark color leaves. The only difference is that it is adorned with smooth feathery bristles.

Generally, this plant is easy to cultivate. Just remember that it won’t tolerate frost or overwatering. It can be planted both outdoors or can be grown as an indoor plant but would love to be exposed under full sunlight. 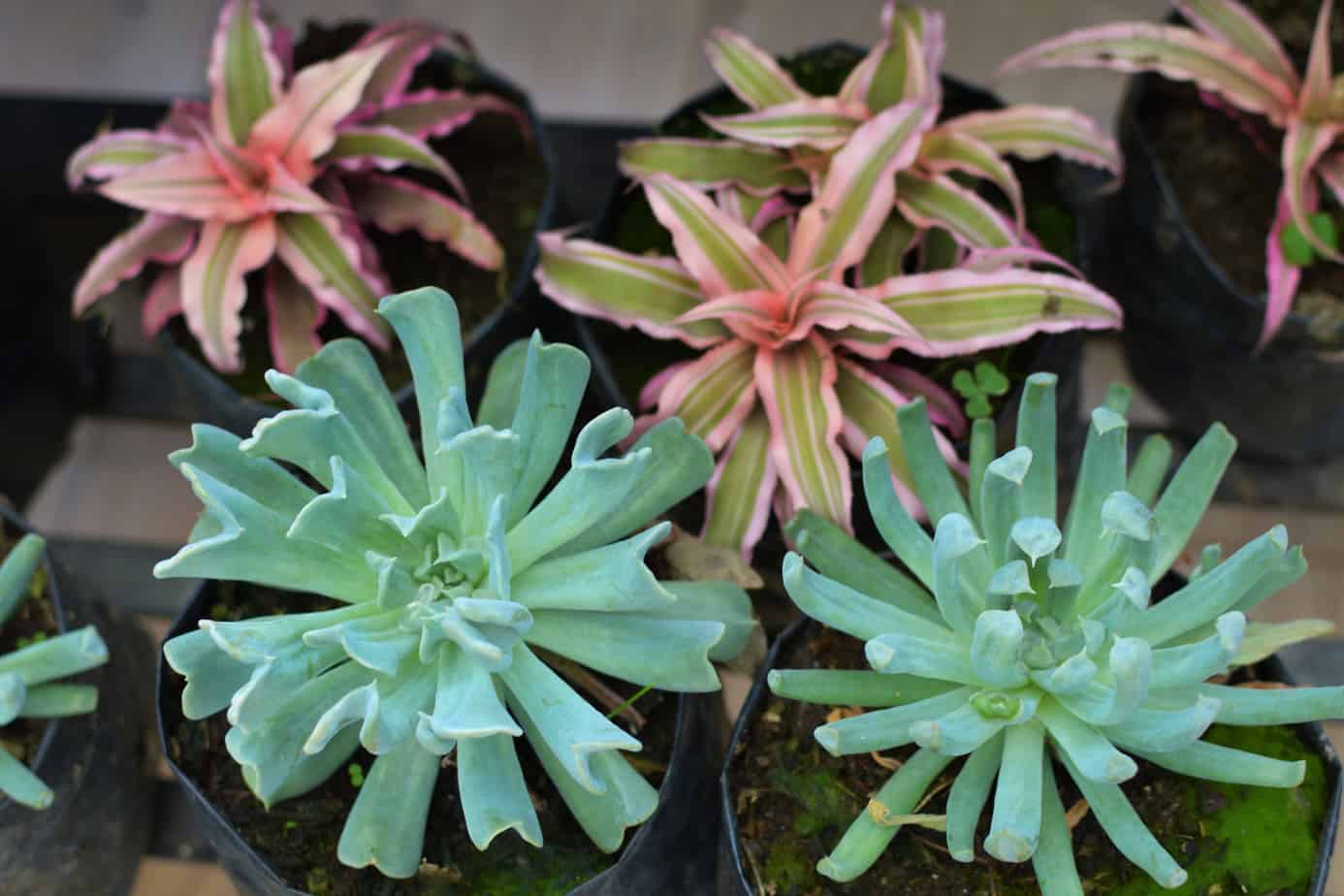 Echeveria runyonii or commonly known as Mexican Hens and Chicks ‘Topsy Turvy’ is a unique among other succulents with its silvery green leaves that tend to grow on a lengthwise fold. The plant forms a stemless rosette creating a dense carpet through time.

Topsy Turvy also blooms during summer producing yellow to orange flowers with star shape. Due to its extraordinary beauty, this succulent received the Award of Garden Merit by the Royal Horticultural Society.

Now, the challenging part is getting hold of these succulents given that they’re rare and limited in distribution. If you don’t find them in your local garden stores, try looking at these places. You might be lucky to have come across one!

Mountain Crest Gardens offer a variety of cactus and succulents. You’ll see different types of succulents here including the hardy and soft ones, as well as the rare and unique plants available.

Some succulents mentioned above like the crinkle leaf plant, the Topsy Turvy, and Tiger Jaws can be found here.

Go to Succulent Market and you’ll discover many live plants for sale there. They have potted succulentsin different cultivars as well as cuttings that you can use for propagation.

We’ve noticed that Topsy Debbie is available in Succulent Market.

Another place that specializes in succulents is the Succulents Box. They also have the Topsy Turvy, as well as the relative of plover eggs, the calico hearts (Adromischus trigynus). Another rare find known as the ruby necklace is also found in Succulents Box.

If you’re looking for premium and hard succulents, then Harddy is for you. Their site offers a wide range of options and you can shop by size or by color. They also offer succulent packs.

You can find some rare succulents including the Panda Plant Kalanchoe and Kalanchoe Chocolate Soldier.

Queen of Succulents is indeed the Queen. This Etsy store based in California offers over 200 options for succulents that are personally grown or hand-picked from the nursery by the owner. You’ll definitely love the stunning colors of the plants offered in this store including rare succulents.

This is your one-stop succulent shop. The Succulent Store offers numerous options for succulent plants that you can use for gifting either to your guests on your wedding day, baby shower etc. or as a corporate gift to show appreciation

This is a family-owned business from where you can pick various succulents including the rare ones.

Of course, Plantlyalso offers many types of succulents. We have both the common and the rare succulents directly sourced out from our partner nurseries. Make sure to check out our marketplace and see what we have in stock.

Enjoy hunting and shopping for your next succulent find!

How To Care for Sempervivum’ Jungle Shadows’