Succulents are mostly characterized for having fleshy and adorable foliage. The leaves in themselves are enough attractive because of various colors, shapes, and forms. But apart from such treats, succulent plants are also flower-bearing.

If you wish to have both gorgeous leaves and flowers from your succulents, then, keep reading. We have some pretty recommendations on the most popular flowering succulents that you can grow both outdoors and indoors. 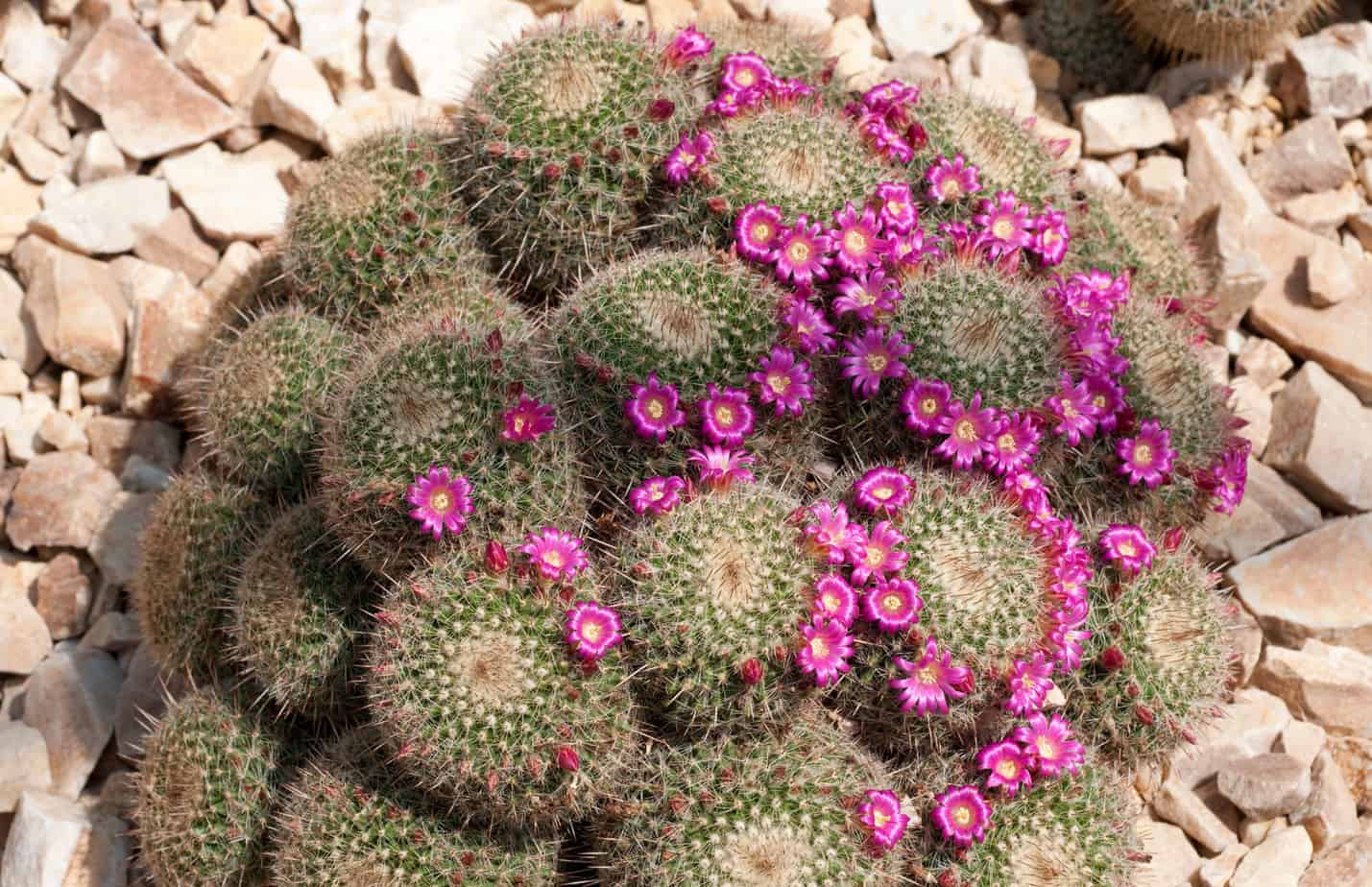 The pincushion cactus barrel-shaped body is surrounded by thorns but you shouldn’t let that disappoint you. There’s a beauty that rewards those who wait because this plant produces pink flowers around the top. With optimum heat and watering, flowers will surely arrive in Spring.

It is even more adorable when the plant has produced offsets. You’d be rewarded by clumps of pincushion cactus and rings of tiny flowers above.

As a pro-tip, make sure to apply cactus and succulent fertilizer every two weeks during the Springtime. That would help the plant produce generous blooms. 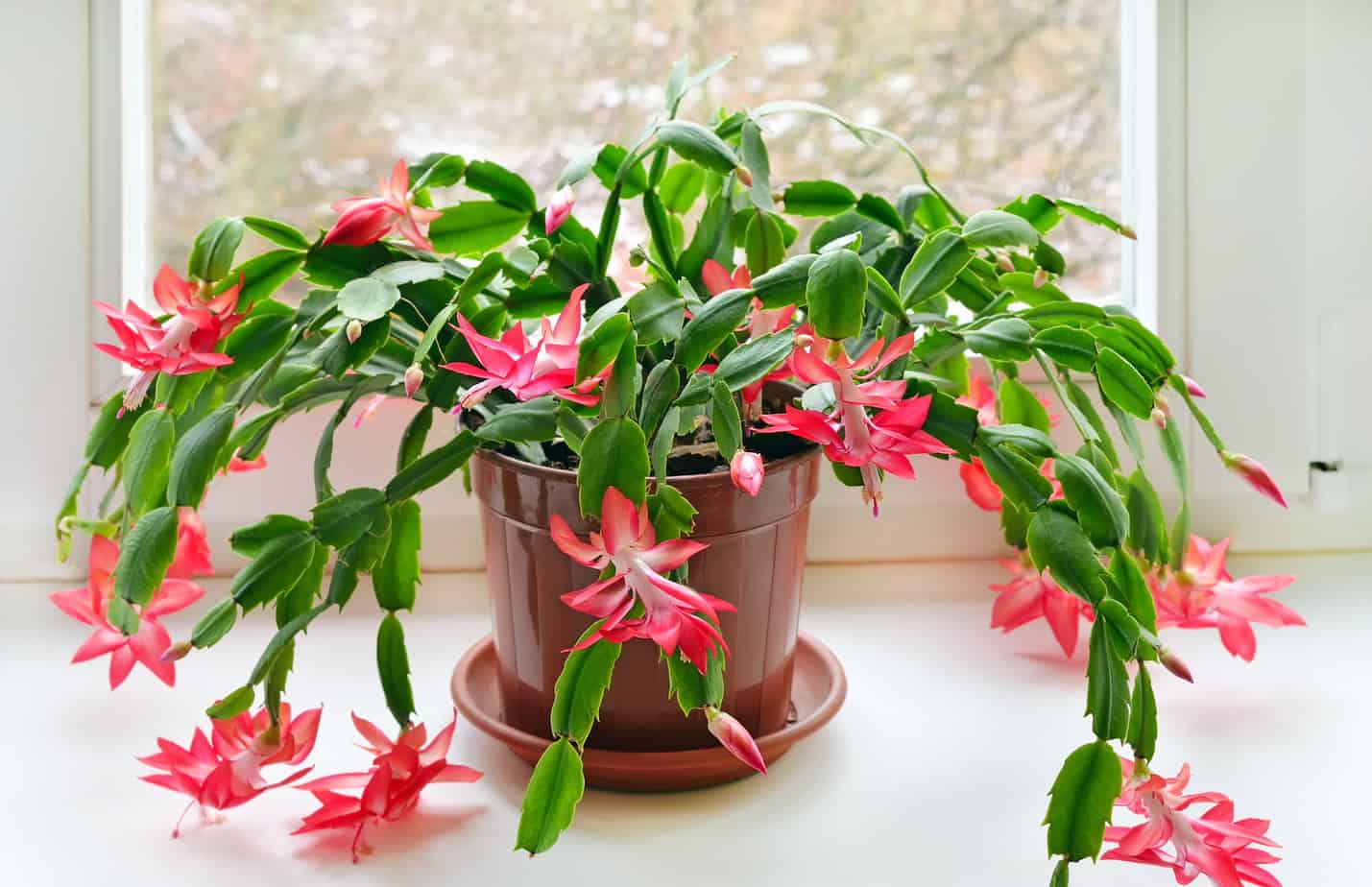 Who would say no to a Christmas cactus? This species is popular for its showy blooms in the form of colorful, tubular flowers in pink or lilac colors. The flowers are even long-lasting making it a perfect display for the holiday season.

Schlumbergera x buckleyi is the Christmas cactus botanical name. It’s different from the other holiday cacti species known as the Easter cactus (S. gaertneri), and the Thanksgiving cactus (S. truncata).

Now, here’s the trick to induce blooming in the Christmas cactus plant. It has to receive at least 14 hours length of nighttime and about 8 to 10 hours length of daytime for six weeks. The low temperature at night would help the formation of flower buds. 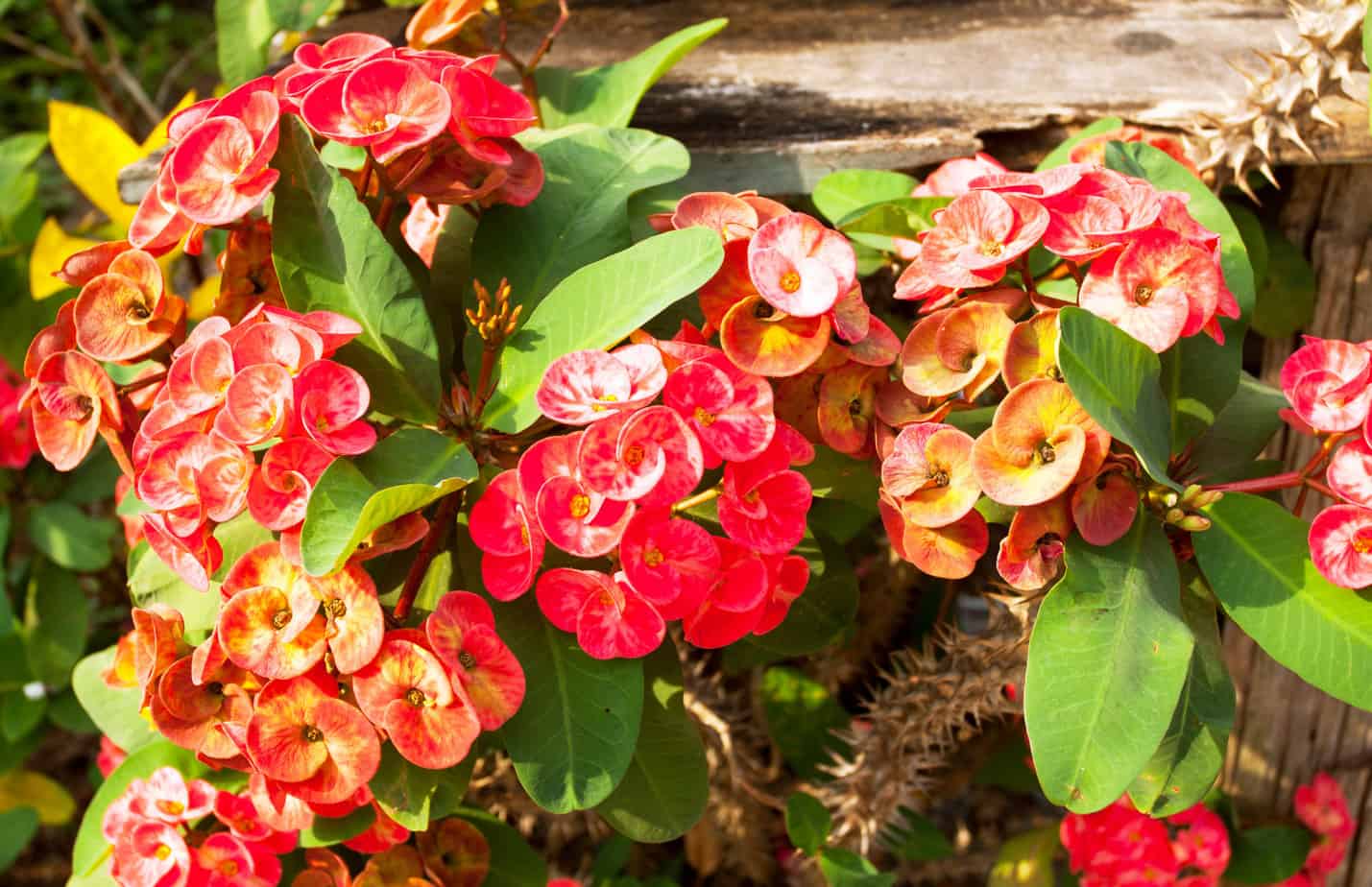 It’s seldom for you to see the Crown of thorns plant without flowers. This flowering succulent is among the easy to care for species you’ll encounter from the spurge or Euphorbiaceae family. It will do well either as an indoor or outdoor plant.

The interesting thing about the crown of thorns is that the colorful petal-like structures you see aren’t real flowers. Technically, these are just colored bracts enclosing the tiny, yellow flowers in the middle.

Just a word of caution if you’re planning to add this to your collection, be sure to handle it with care as the milky sap found in the plant is highly toxic. 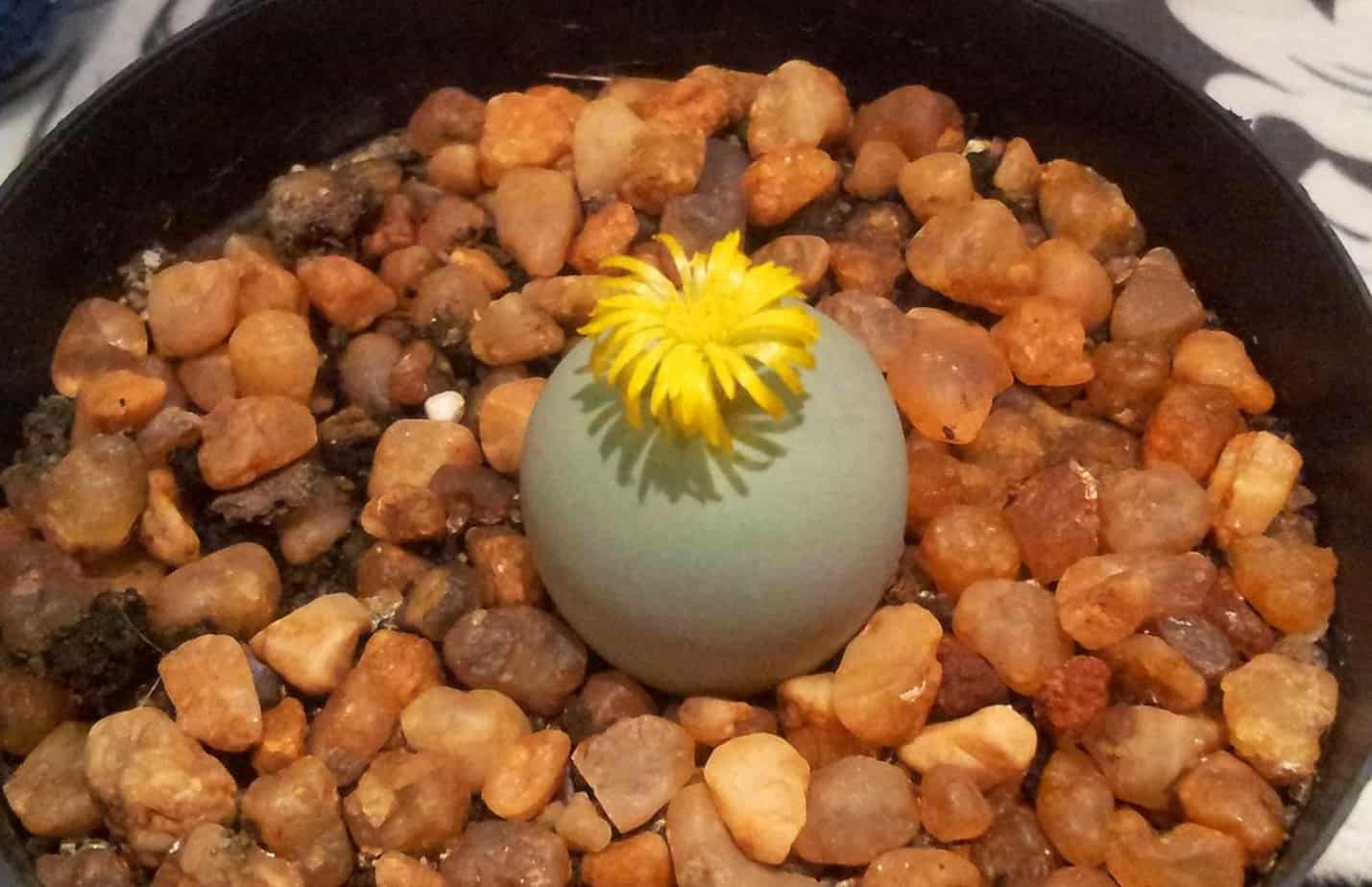 One look at these marble buttons and you’ll be fascinated. This small stemless succulent has a spherical shape which later forms dense clumps. The fleshy leaves have pale-green color and are almost spotless as a marble.

Aside from its amazing form, marble buttons are also blessed with beautiful flowers that are golden yellow to orange in colors. These appear in the middle on top of each chalky marble looking like a crown. Flowering occurs in the fall season.

Take note that marble buttons have nocturnal flowers. So, for you to see the blooms, you have to be awake during the night. 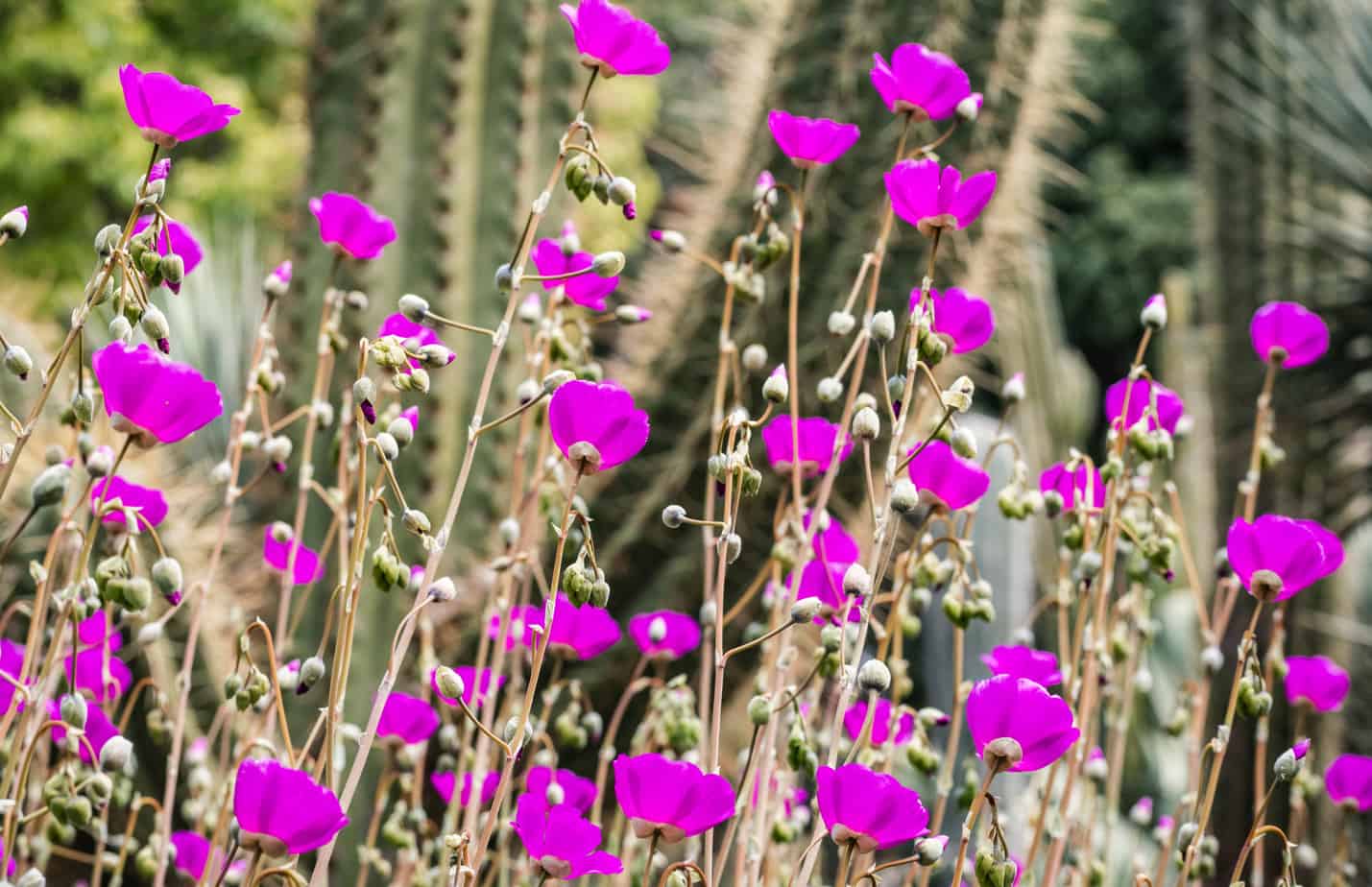 A perfect flowering succulent to spread in your rock gardens, Cistanthe grandiflora or rock purslane has cup-shaped bright fuchsia flowers. The blue-green mounding foliage produces beautiful flower stalks that could reach up to 12 inches tall. It can spread up to 2 to 3 feet when planted outdoors.

The colorful blossoms are a great attraction not only in a rock garden but in sidewalks and ho-hum hills, too. You can even plant it in pots. Since it is, a drought-tolerant plant, very little watering is required. 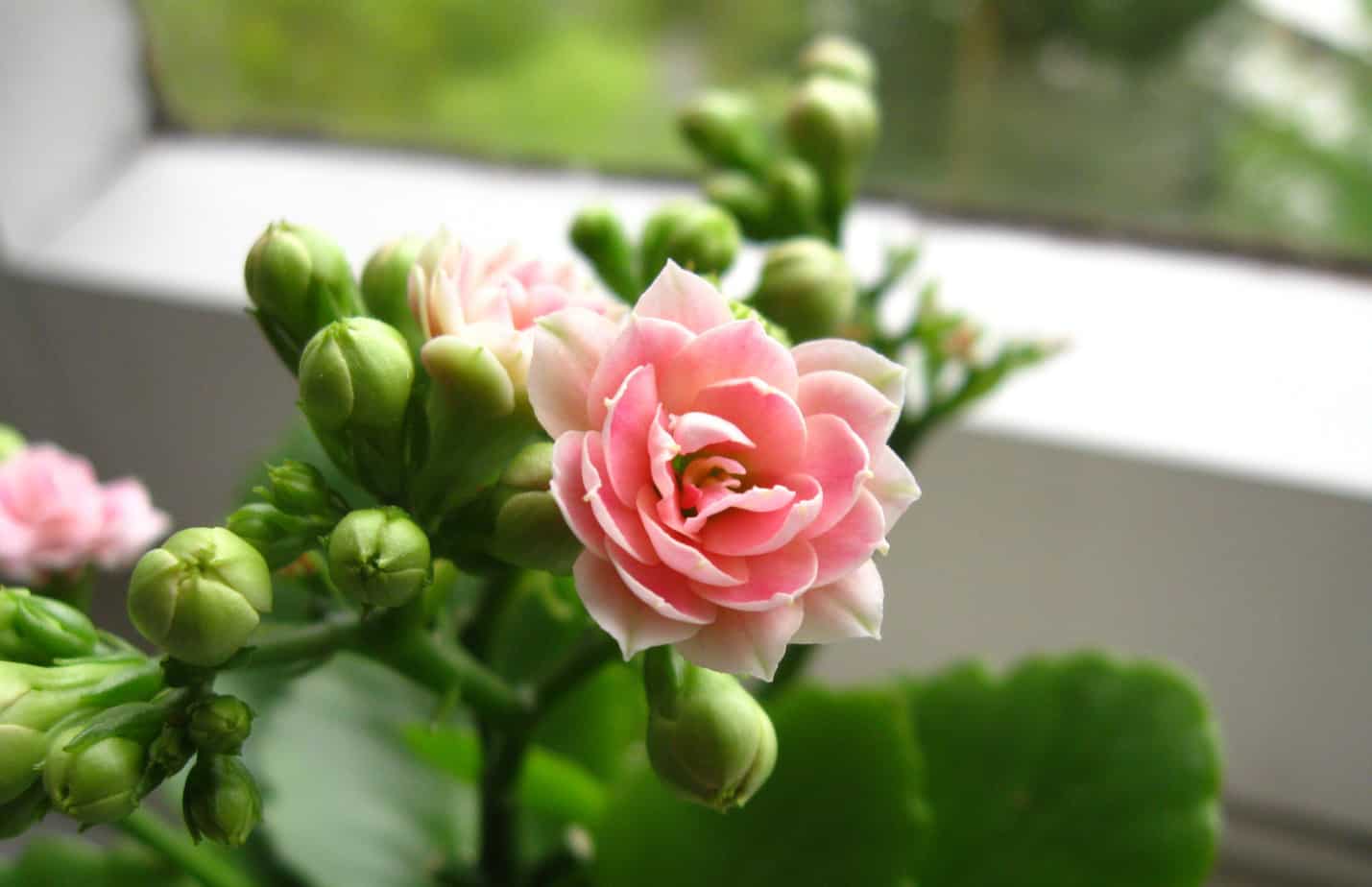 Another member of the flowering succulents is the kalanchoe. This one is a staple in many flowering trades because of those showy blooms. Just like the blooming Christmas cactus plant, kalanchoe will respond to the length of daylight from where it is exposed.

The flowering kalanchoe botanical name is Kalanchoe blossfeldiana. Aside from the flowers, the plant also boasts dark green leaves that are very attractive once combined with the clusters of colorful petals during the blooming season. 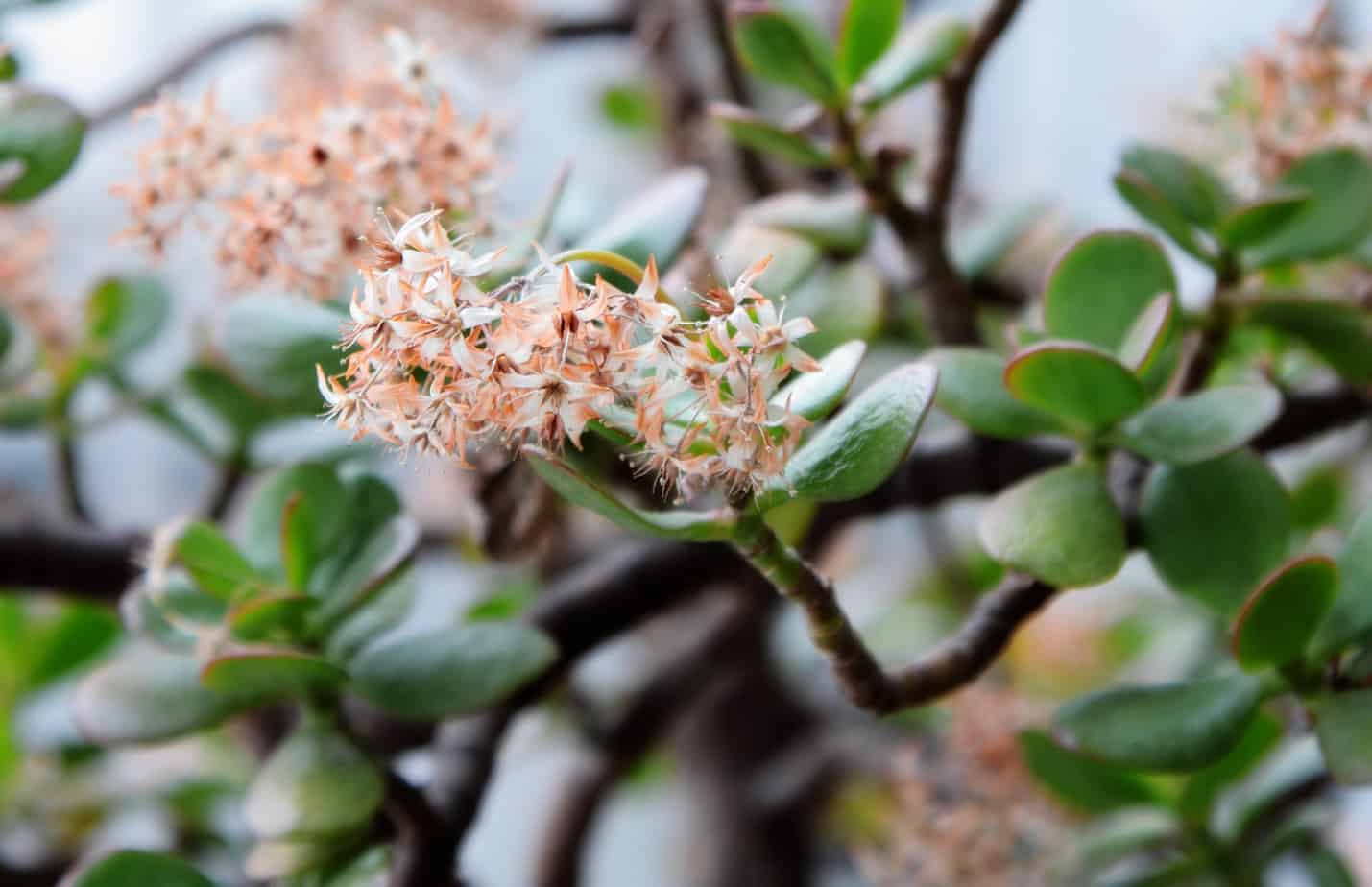 Jade plants are something you’re familiar with. Primarily, they’re known for their attractive foliage. But, do you know that jade plants are more than that? They produce tiny clusters of star-shaped flowers, too! Either the blooms appear in white or pink color.

Flowering, however, takes a very long time to occur. Your jade plant would have to grow mature first. So, don’t expect flowers to appear in the first years of your young jade plants.

Make sure to place your jade plant in a sunny window. By doing so, you’ll encourage flowering to occur in mature plants. 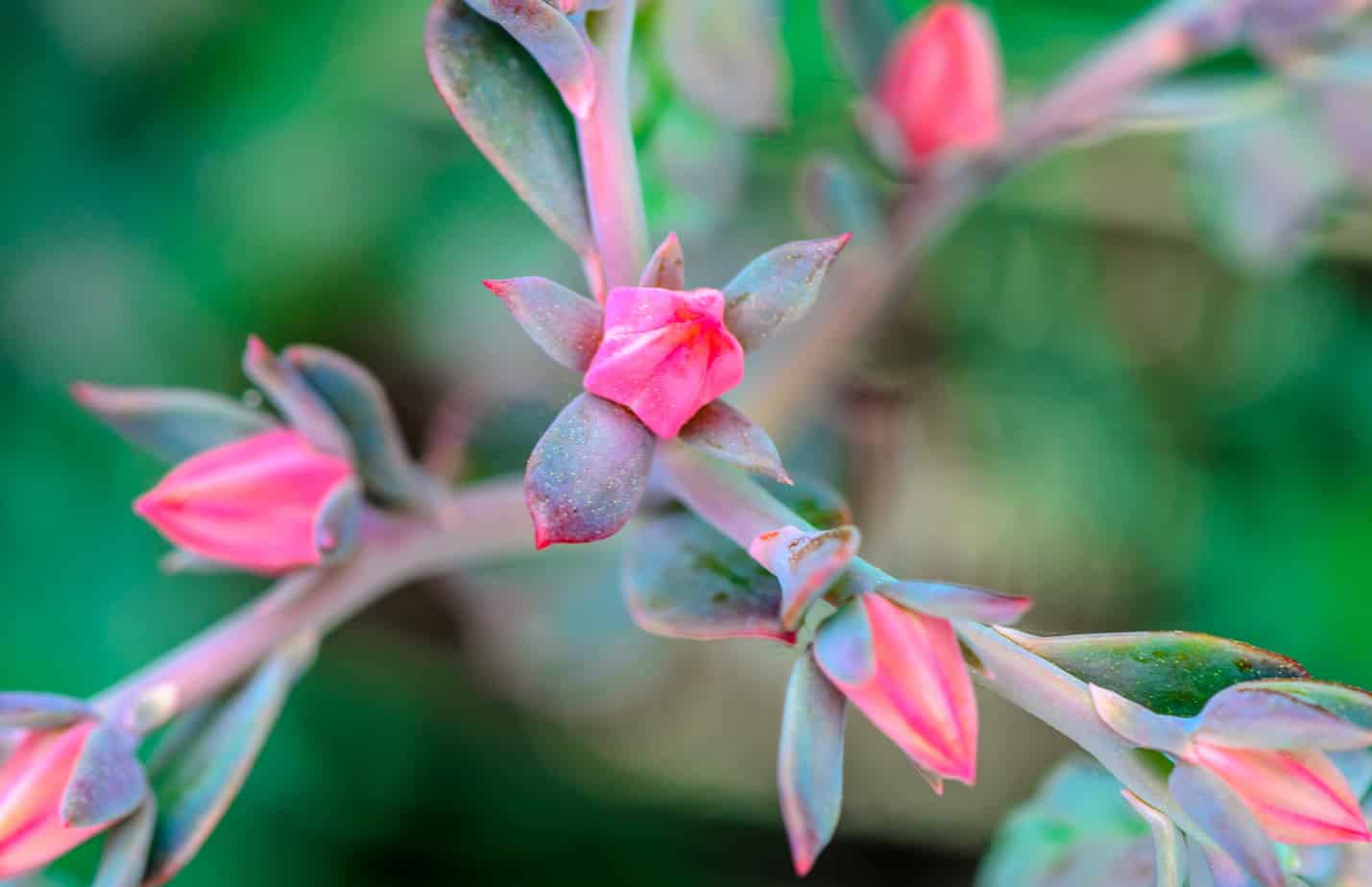 The Echeveria ‘Afterglow‘ is a hybrid between two varieties: the Echeveria Cante (White Cloud Echeveria) and the Mexican Hen” Echeveria Shaviana. Afterglow grows a highly attractive lavender shade rosette while it can grow up to 1 to 2 feet tall.

The plant also produces a long flower stalk and at its terminal, the orange flowers are born. Due to its highly attractive flowers and foliage, Afterglow is considered a high-valued succulent. 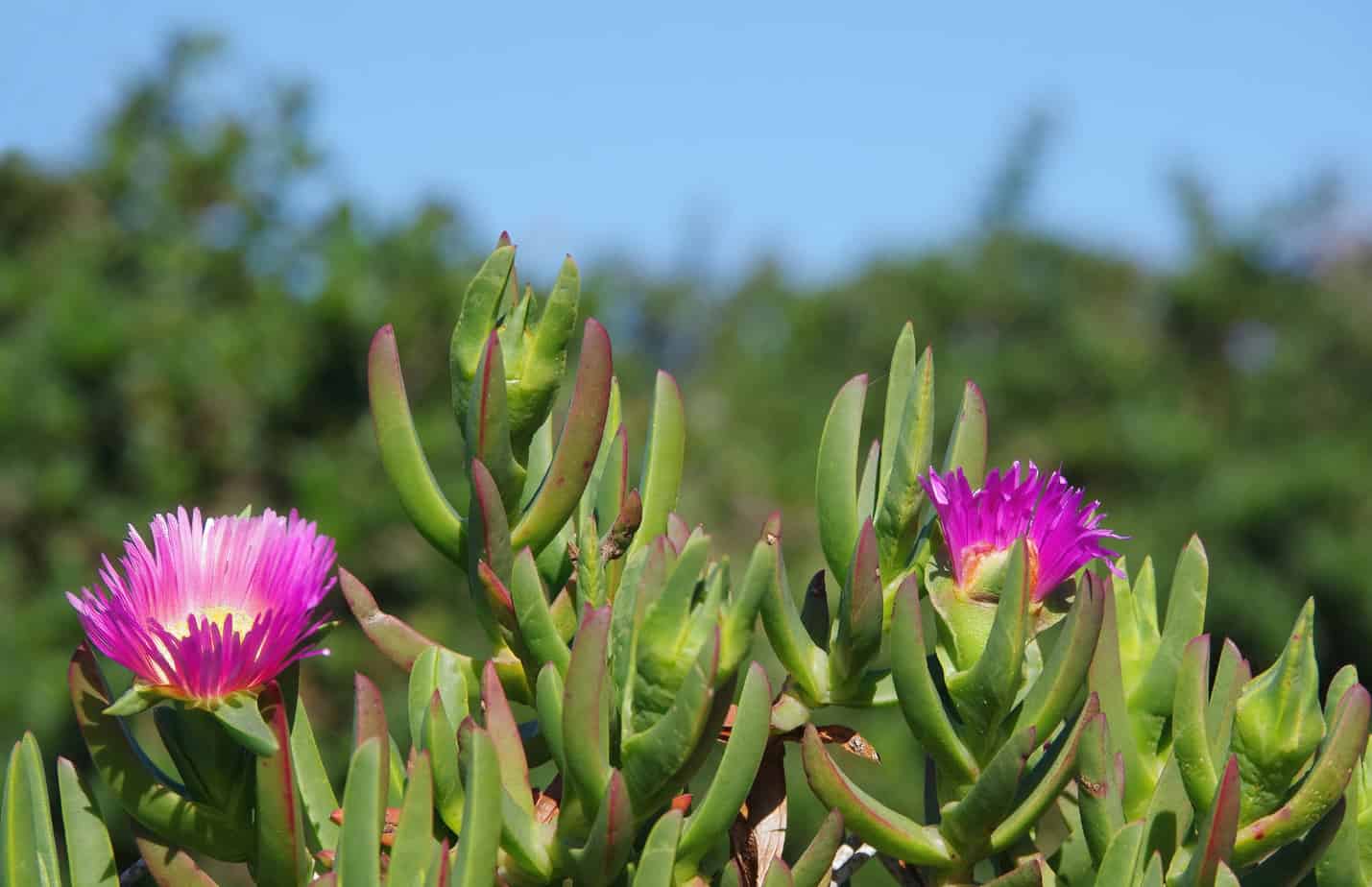 The hardy purple ice plant is a flowering succulent that has trailing stems. They look good on hanging baskets. But you’ll also find them sprawled over the ground outdoors.

The interesting part about the purple ice plant is its daisy-like purple flowers. These flowers along with their glossy dense foliage would shimmer as though they’re covered in frost. This is the reason why it’s called an ice plant.

Just like the other succulent plants, this one doesn’t like wet feet. And make sure to provide lots of direct sunlight for it to flourish.

The purple ice plant botanical name is Delosperma cooperi but other species have almost the same appearance bearing different colors of flowers. 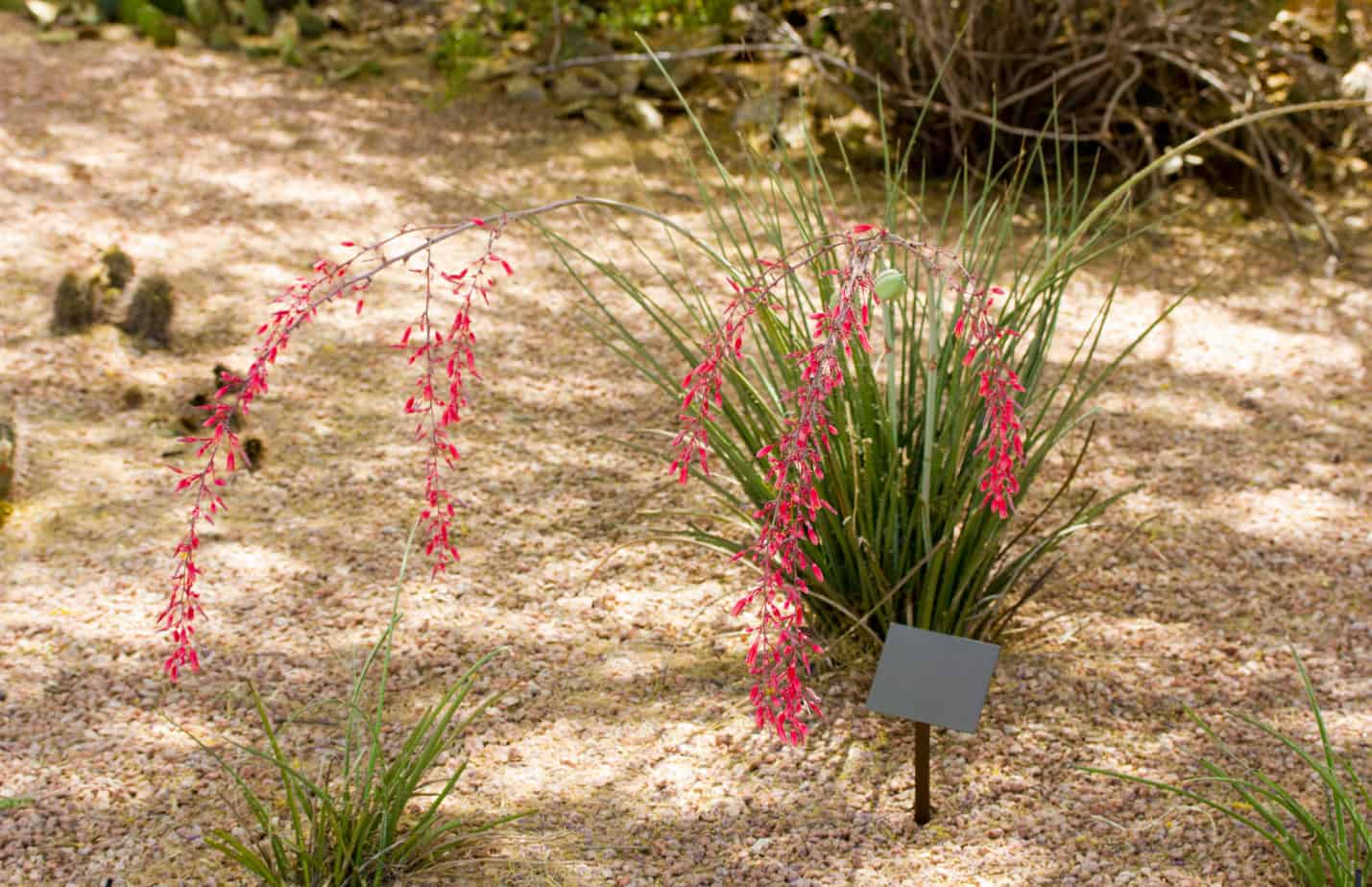 Red yucca is native to the deserts of Texas and northeastern Mexico. It’s a heat-tolerant succulent species that becomes a favorite of hummingbirds because of its red, tubular flowers. At first glance, it resembles the appearance of ornamental grass but they’re entirely different.

They thrive best in desert or rock gardens because they love the combination of well-draining sand, loam, and limestones.

The blooming season is between March to July. 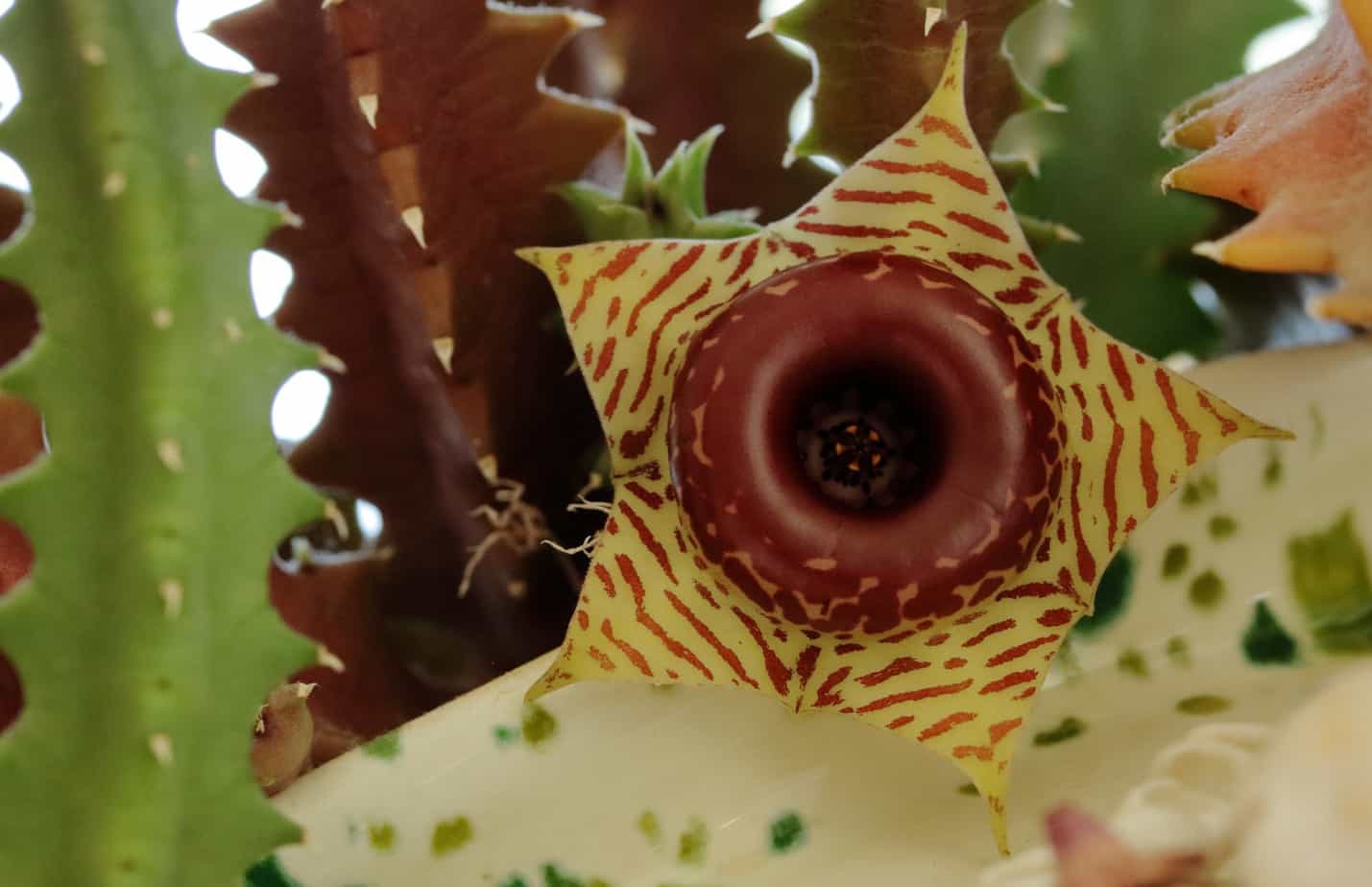 Have you ever heard of the lifesaver cactus? If not, then this one looks like a zebra plant or a lifesaver candy because of the strips you’ll see on the surface of its large flower heads. This plant is unique for its appearance.

Even though it’s rare, the lifesaver cactus is not hard to please. Just give it plenty of bright, indirect sunlight and well-draining soil and it’ll thrive happily.

A native of Africa, the lifesaver cactus botanical name is Huernia zebrina. 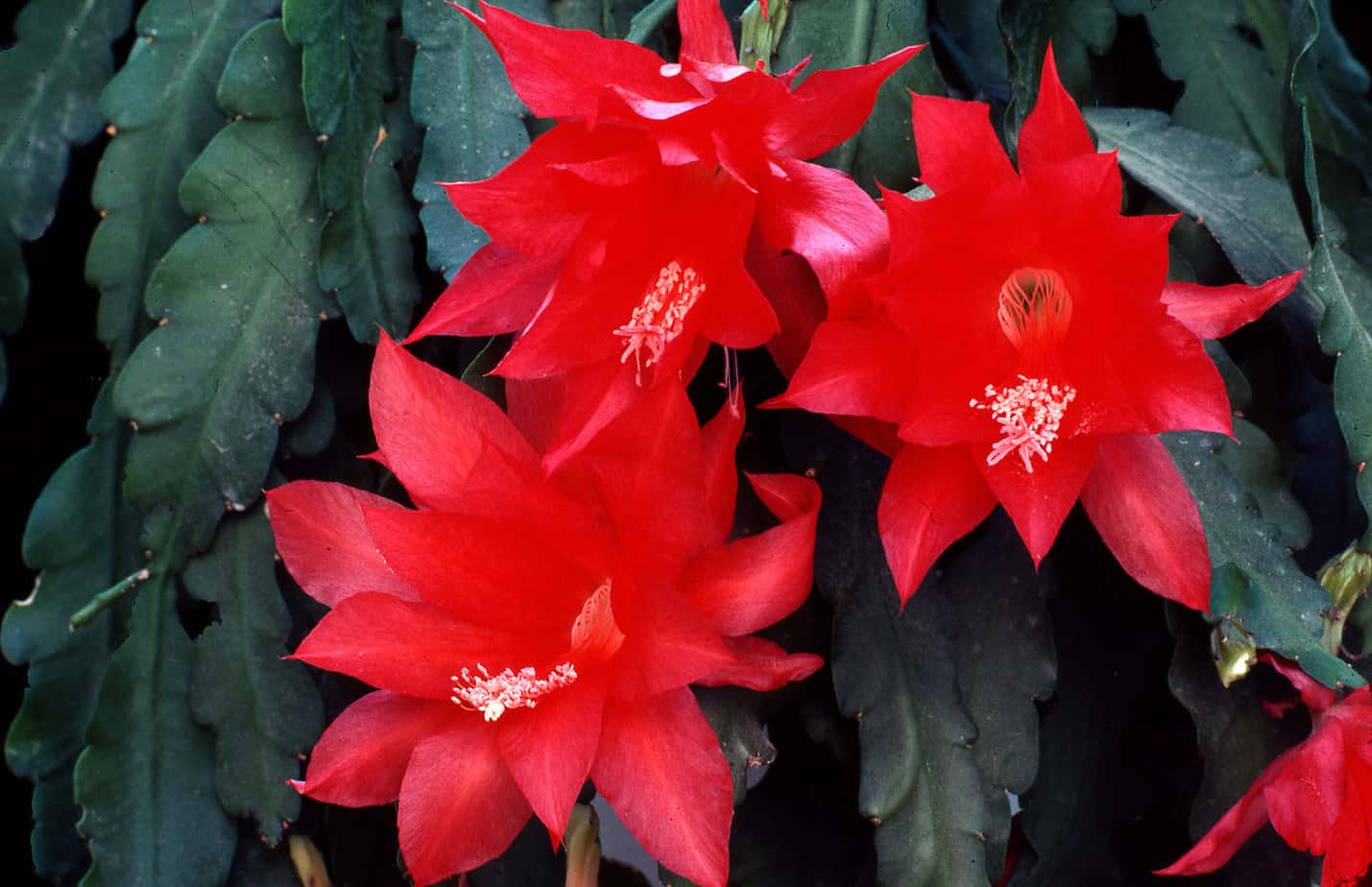 If you want to see showy flowers then go for the orchid cactus. This one’s a gorgeous member of the flowering succulents, one you’ll never get enough of. The cup-shaped flowers will look extravagant as they cascade from a hanging basket. It also has dense foliage.

You can expect to see spectacular blooms from early winter through spring. Depending on the variety, the color may be pink, red, white, yellow, orange, purple, or even bicolored. The catch though is that the blooms last only for a couple of days. So, make sure to take great photos! 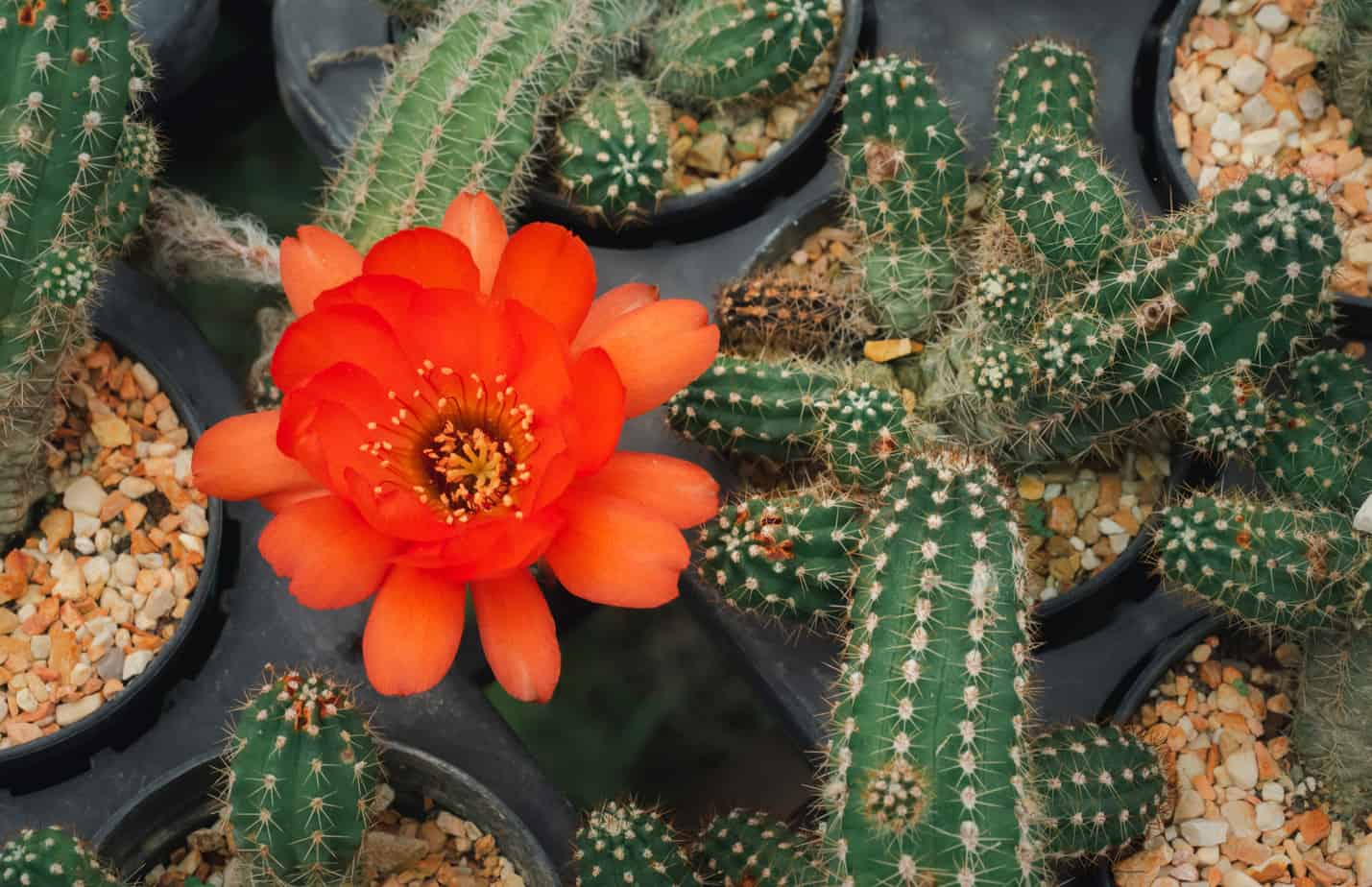 The finger-like stems of the peanut cactus are already amusing enough. But wait until you see the plant blooms during the spring to summer seasons. It produces gorgeous, large, dark orange flowers.

If you have this plant indoors, make sure it receives plenty of bright light. Peanut cactus botanical doesn’t like areas with low light conditions. When placed outdoors, find a place where it receives full sun.

Like most succulents, peanut cactus have shallow roots. Therefore, you can leave the plant slightly root-bound. 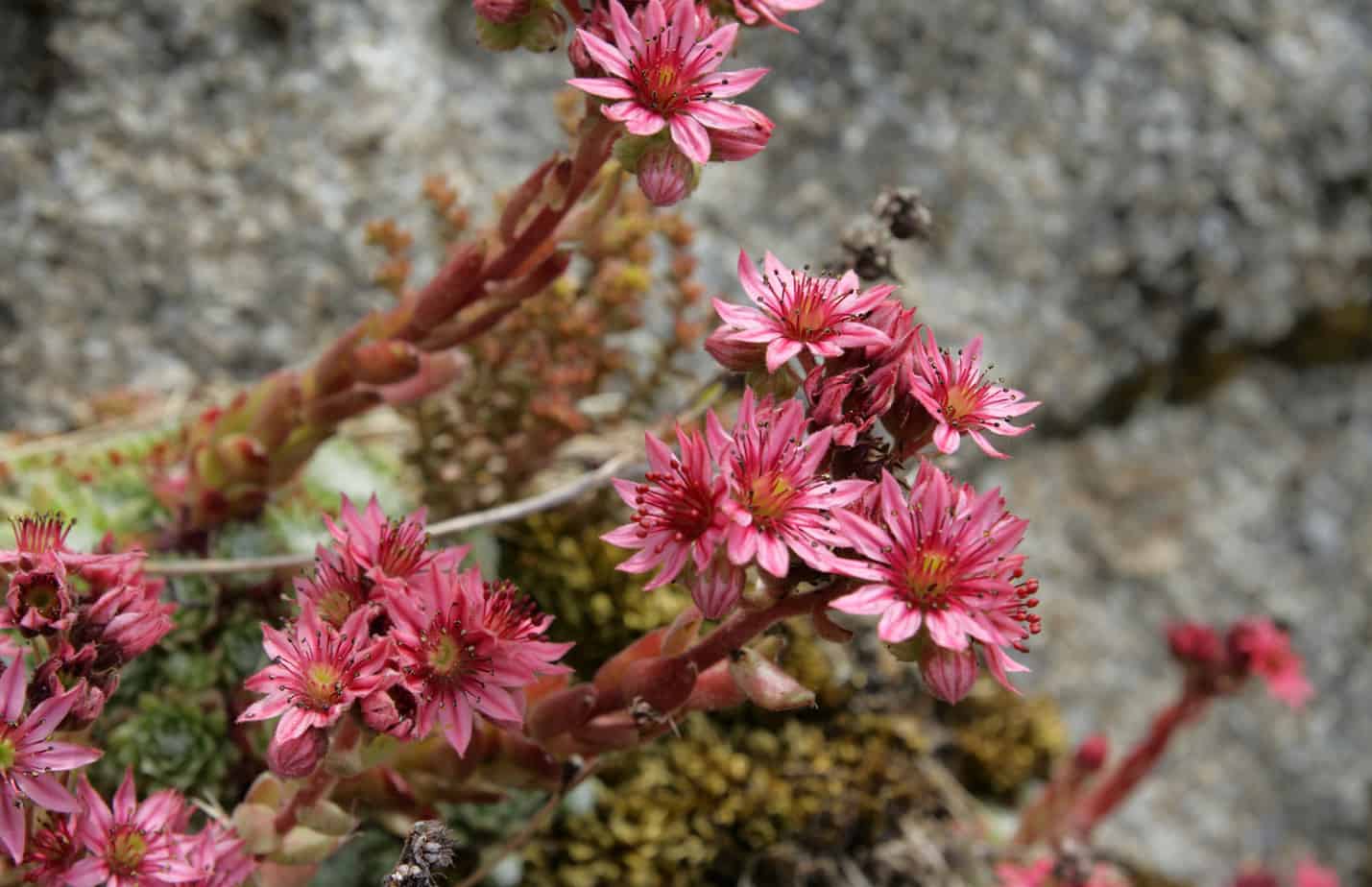 This one has a unique name and appearance. As fascinating as it is, this succulent has a cobweb-like structure covering its low-growing rosettes. If you’re unfamiliar, you’d suspect that spiders are living in there.

Nevertheless, it’s a pretty member of the flowering succulents group. It bears star-shaped flowers that are pink in color. The bad thing though is that the plant dies after the flowering season. But don’t worry because the offsets are already there before this happens. 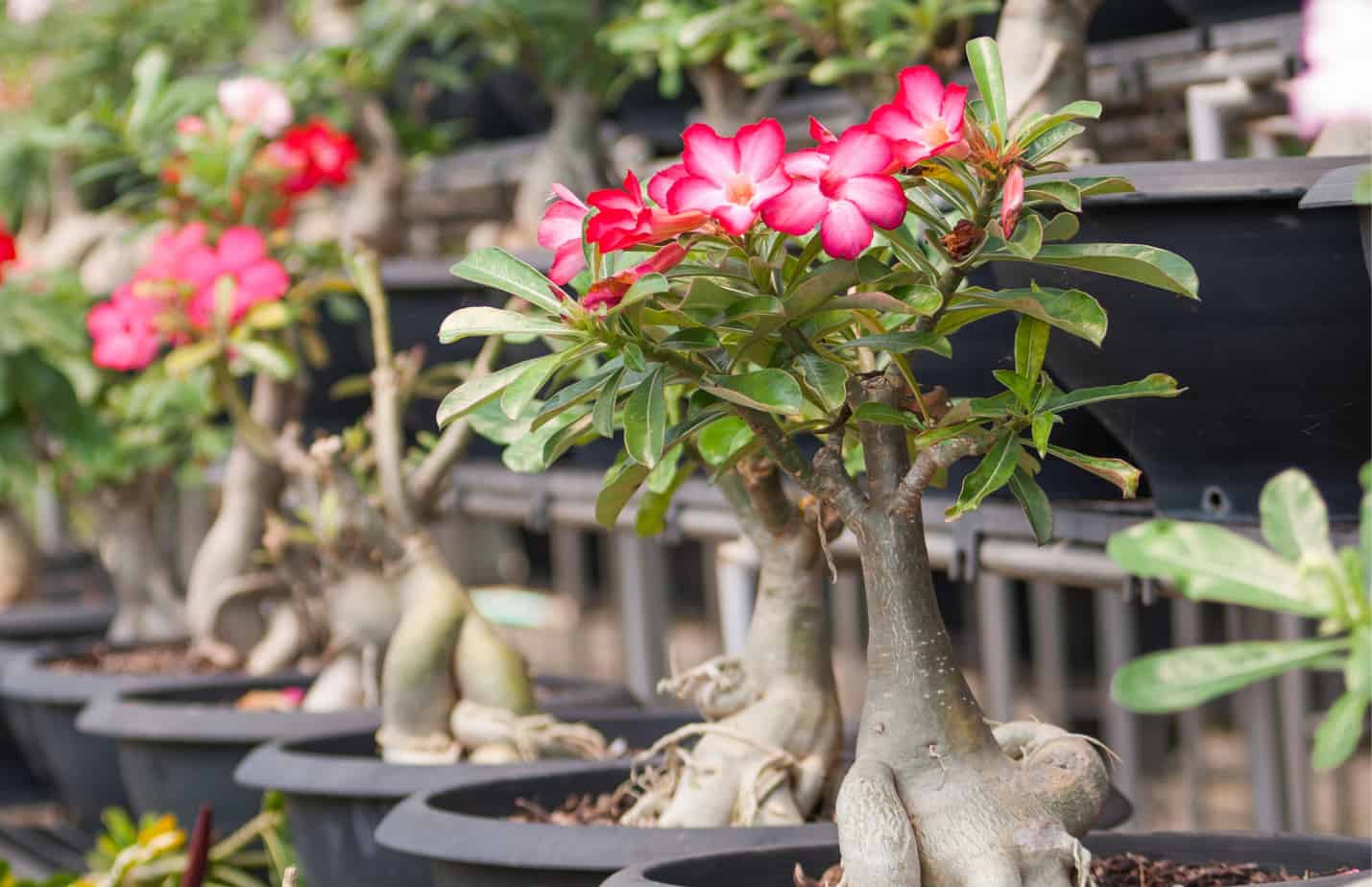 Last but not least in our recommendation is the desert rose plant (Adenium obesum). It has a thick succulent trunk looking like a small tree. The leaves are glossy but few and the flowers are quite showy and attractive.

Desert rose is a popular flowering plant. It has been extensively hybridized to produce varying colors of flowers. The plant needs proper watering and lots of direct sunlight.

Although the list goes on for our flowering succulents, the ones mentioned above are among the most popular. If you wish to add more color to your landscape or your homes, make sure to include these plants in your next plant shopping spree. Check Plantly for the best recommendations.

Is Philodendron Toxic to Cats? Symptoms and Treatment

How to Take Care of Spathiphyllum Plant