Have you ever encountered those small succulent plants scattered on the soil like real pebbles? Those are called lithops or living stones. Such a name is drawn upon its general appearance where it resembles the shape and color of small stones. In fact, when you see it in the dry and arid regions of South Africa where it originates, you’ll barely recognize them as plants.

These cute pebble plants barely grow more than an inch above the soil surface. It produces only a pair of fleshy leaves with a small gap line in between that they look like hoofprints. Lithops have no true stem and are slow-growing. In its natural habitat, you’ll mostly see them in clumps.

Learn more about this amazing rare plant by reading the information below:

Fertilizer: Fertilize once a month during the Spring season 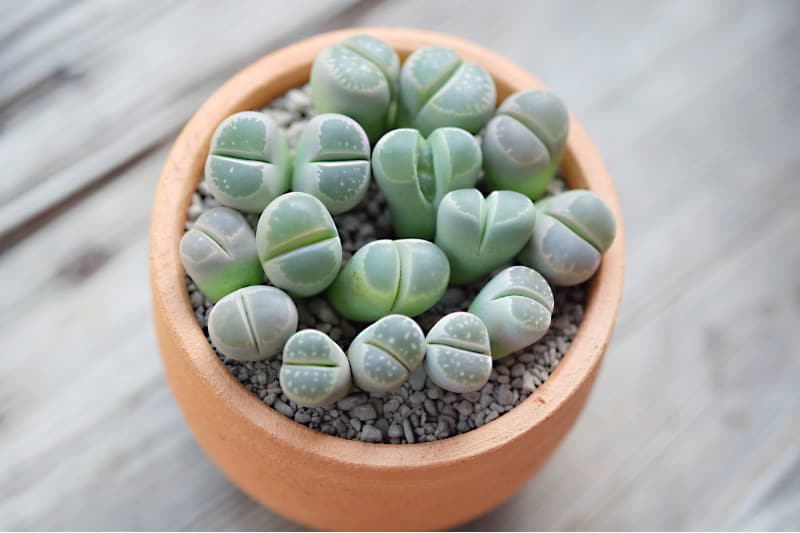 Growing lithops is not much of a demanding task. These small plants are relatively easy to tend to even for beginners. So here are the important things you have to bear in mind in order to grow your own living stones at home.

Any succulent or cactus mix will do for lithops succulents. When doing your own potting medium, remember to add enough pebbles, sand, or any gritty material to make it porous and well-draining. It’s important that the mix drains water fast because they are highly sensitive to extra moisture. Roots can easily get rotten with standing water.

Make sure to also sterilize the potting mix before planting your lithops. This is to avoid the proliferation of diseases caused by soil-borne pathogens. 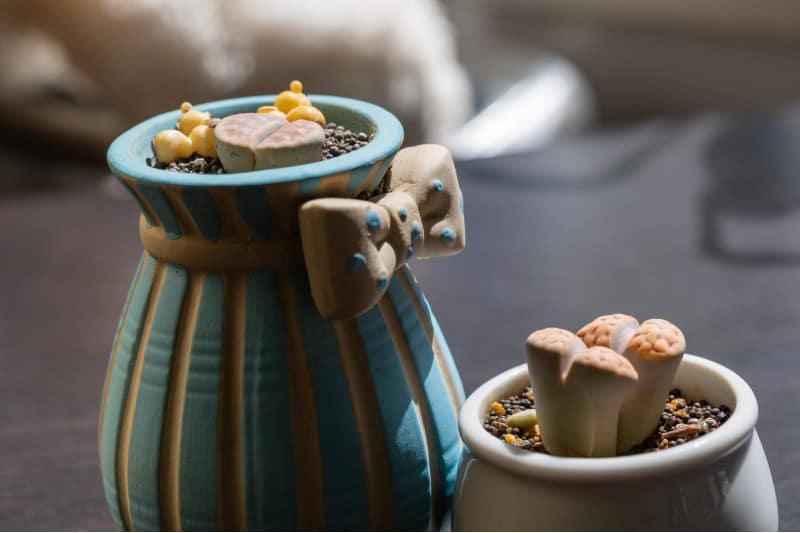 Direct sunlight can be a little harsh to lithops. Thus, we recommend that you expose them to only four to five hours of direct sunlight per day. After that, you can place it under partial shade especially during the heat of the afternoon sun. If you treat it as an indoor plant, you may place it in an east or south-facing window. Such location would give the optimal light needed by your living stone plant.

If your lithops plants are becoming leggy, that’s an indication that your plant isn’t receiving enough sunlight. So, find a suitable location that is well-lit.

Watering lithops should be taken with great consideration and care. To ensure that your lithops grow healthily, keep them away from too much moisture. Normally, you’ll only need to water lithops once every two weeks. That watering schedule should suffice to supply the plant’s needs. Anyway, lithops have their own fleshy leaves to store enough water for themselves, so, they won’t really get thirsty.

In their native habitat, lithops plants are used to dry and warm environments. The ideal temperature ranges between 65 to 80oF (18 to 27oC). However, these living stones could also tolerate up to 90 to 100oF (32 to 38oC). During winter, when the temperature gets cold, the older leaves of your lithops will start to die. Don’t panic because it is the normal course of affairs. 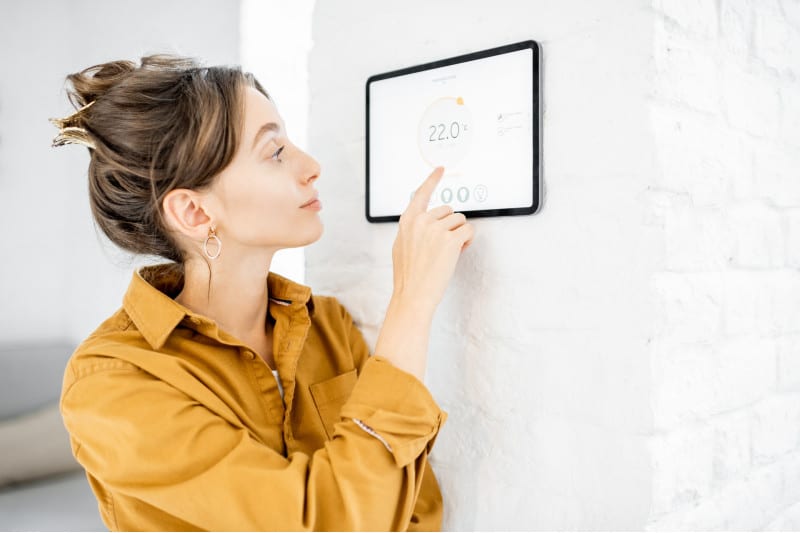 Remember to keep your pebble plants dry as much as possible. Extremely humid areas may cause the rotting of these lithops plants. Avoid placing it in moist places like the kitchen or bathroom.

Lithops plants wouldn’t need frequent fertilization. Like most succulents, this plant can thrive in nutrient-deficient soils. However, if you wish to encourage flowering, you may feed it with a heavily diluted cactus fertilizer. Do this after early in spring when you start watering again.

Avoid pouring the fertilizer directly on the leaf surfaces. Excess fertilizer may cause damage to your living stones. Make sure to add fertilizer with great caution. 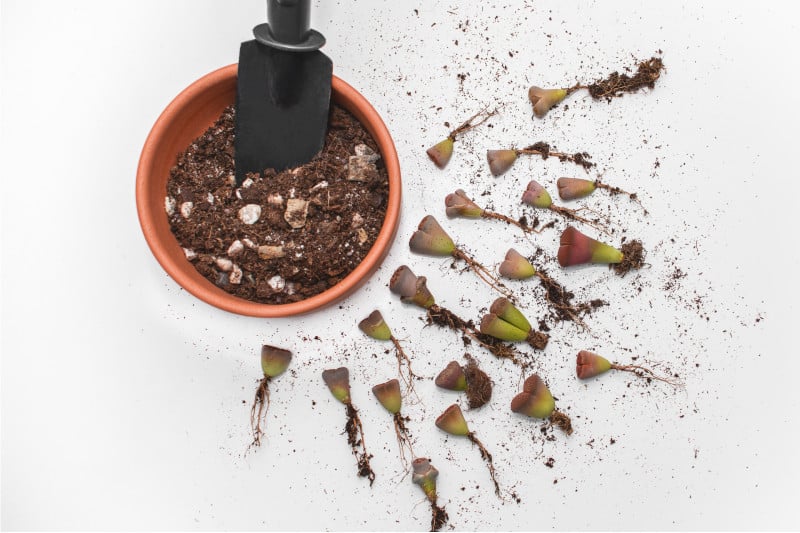 You can use liths seeds to multiply your parent plant. All you have to do is sprinkle the seeds on the soil surface. Cover it with thin soil and keep it lightly moist to encourage germination. You can thin out excess living stones and transfer them to another container. The remaining young plants can be grown in the same pot.

Another way to propagate is to divide the existing clumps of living stones that have overgrown the pot. Once divided, you may plant the lithops plants in another container until it grows independently.

The living stone plant will grow well in areas under USDA Zones 10 to 11. It is well suited as an outdoor plant when mild summer occurs.

Unlike other plants, these living stones lithops wouldn’t need frequent repotting or pruning. Remember that these succulents are quite small and they grow very slowly. It may take some time before they fill in a small pot.

On the other hand, lithops have leaf pairs that do not grow like the normal foliage. So, there’s no need to trim them off. Even the old leaves will shrink on their own once the new leaves emerge.

More than a hundred varieties under 37 species of living stones are available for you to choose from. They come in various colors, shapes, markings, and textures of the body. Some are in colors of gray, brown, rust, green, and even pink. To give you a few options, here are the most common varieties you’ll most likely encounter in a garden center. 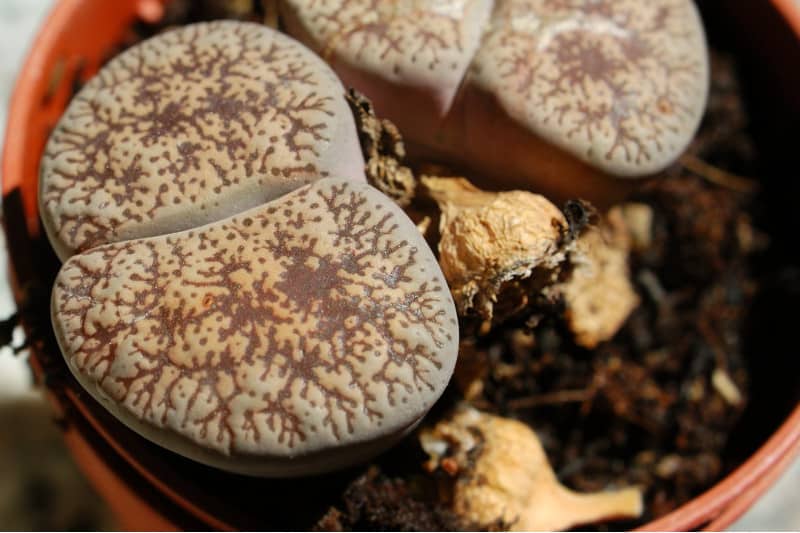 Also known as Leslie’s living stone, this variety has thick leaves that are covered with dots on the surface. It also produces yellow flowers. 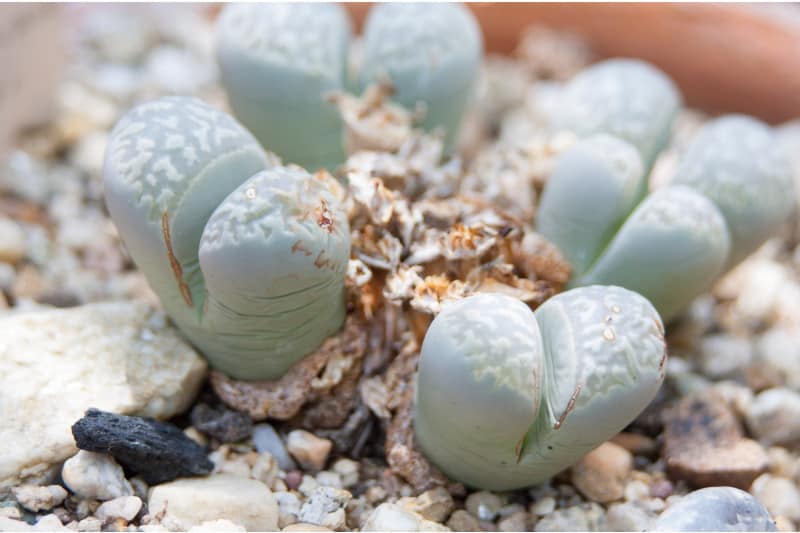 Lithops marmota has a color of grey-white or pale grey-green. The leaves are dark translucent in appearance. If you can imagine a marble tile, that’s how marmota lithops look like. 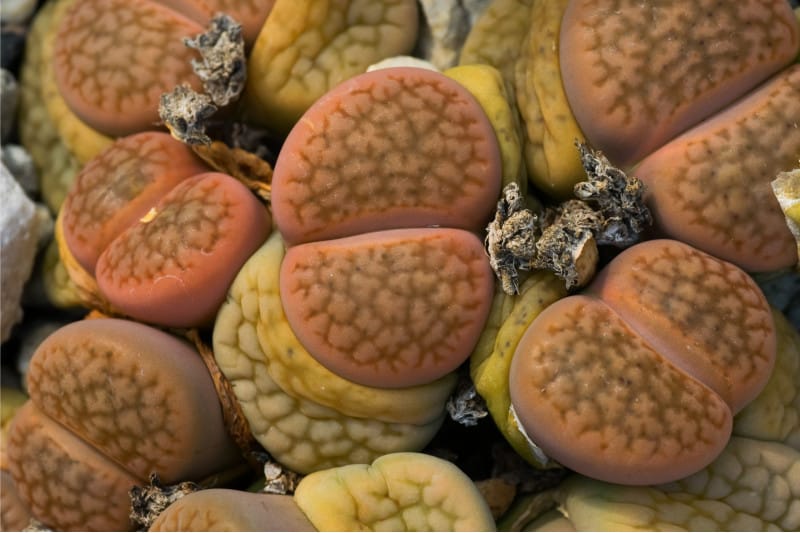 Hookeri is larger than the two previously mentioned lithops plants. It ranges from medium to large, forming clumps up to 10 or more heads. The surface of the leaves looks like an embossed brain. It can be found in rocky places of South Africa, particularly in the Cape province. 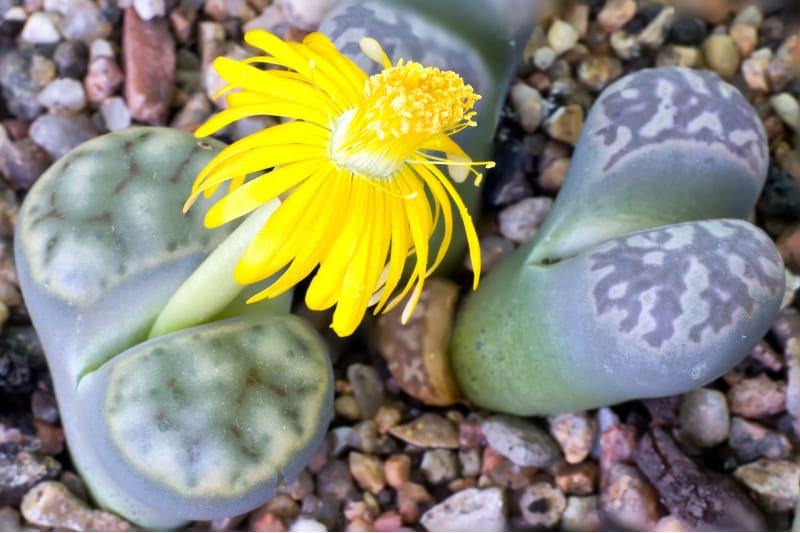 This species can be found in just a small area of South Africa particularly in Steinkopf-Arrabies; Steinkopf-Kinderlê, and Namaqualand Republic. Helmutii is a green lithops that have transparent, windowed leaf pair. Interestingly, such appearance serves as an advantage as it gives them the ability to camouflage. 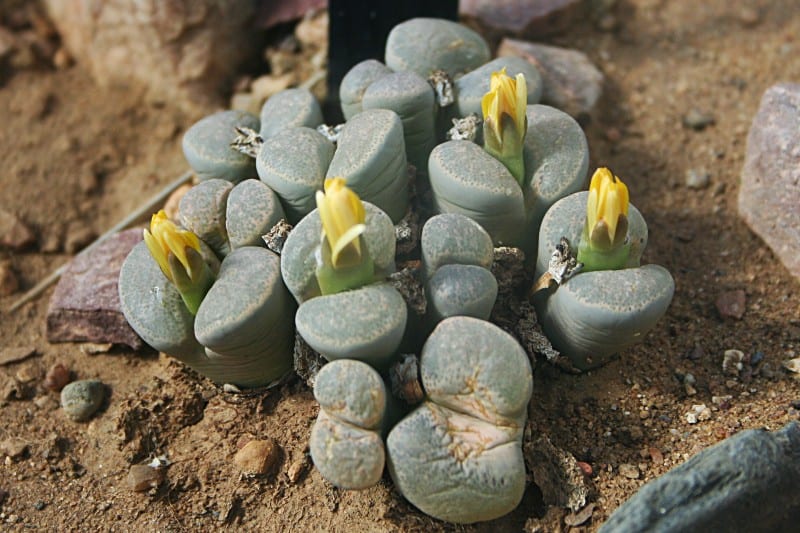 Terricolor is otherwise known as Lithops localis. This species has prominent small dots on its surface that ranges in color from dark grey through browns to purple.

Spider mites, thrips, scale insects, mealybugs, aphids, snails, slugs, and root-knot nematodes are the common pests and diseases that may potentially harm your lithop living stone. You can get rid of the pests by simply spraying them off with water. Others use diluted dishwashing soap to kill them.

Make sure to keep your lithops dry in order to prevent invasion of pathogens that normally grow when the environment is moist.

What is the Lithops growth cycle?

It’s important to note that lithops begin growing during fall all throughout winter and spring. That is why you’ll notice that the older leaves will start dying in early winter. When spring comes, the dead leaves will shrink behind revealing the young leaves that have grown.

From late spring to early summer, living stones will go dormant. This is their period of rest so there’s very little to no growth at all.

How do you keep Lithops alive?

When given excellent care, living stones can remain alive in the same pot for about 10 to 20 years. Amazingly, these tiny succulents are long-lived. Just make sure to avoid overwatering, provide enough sunlight, replace potting medium from time to time, and keep it mostly dry.

How can you tell how old a Lithop is?

Old lithops will eventually shed their aged leaves. This is an indication that your lithops is producing another generation of pups.

Where to buy Lithops?

Are you finally getting your own lithops plants now? Head out to plantly and see our wide range of options for unique succulents.