The beautiful Senecio bush is an excellent choice if you’re searching for an easy-to-maintain succulent. This article will show you how to care for your Senecio bush to remain robust and joyful. Stay tuned as Plantly will get you the details. 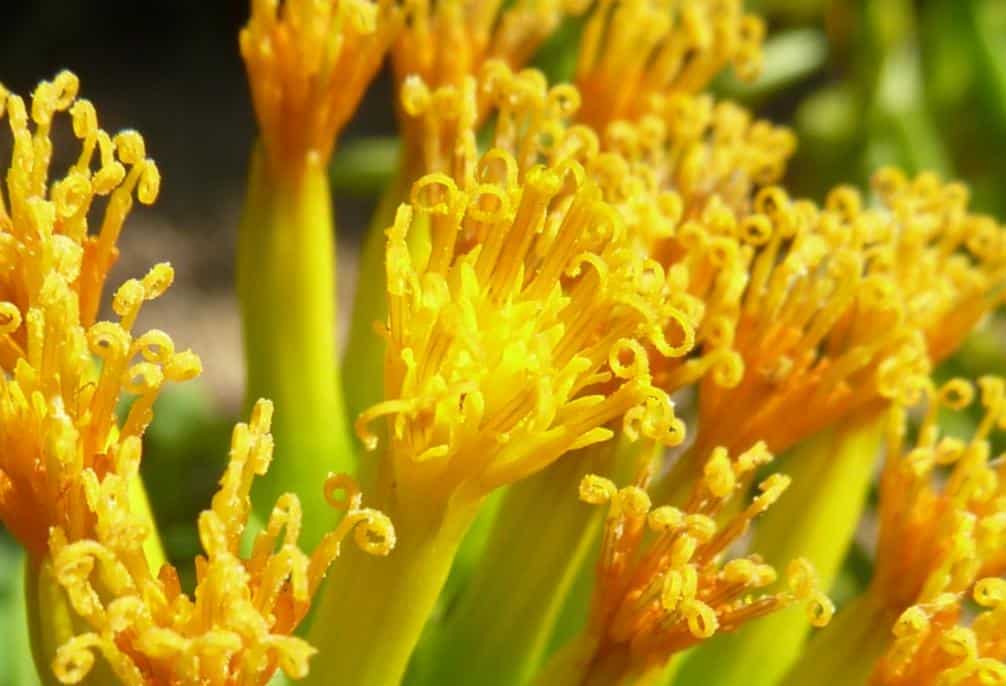 The Senecio bush or Kanna, or Senecio barbertonicus, also known as the evergreen succulent shrub, is a member of the daisy family indigenous to Southern Africa. It gets its name from its furry, Kangaroo Paw-like flowers that bloom in shades of yellow, orange, and red. This outdoor plant attracts butterflies, making it an excellent choice for butterfly gardens.

It’s a low-growing, woody succulent that typically reaches about 2 feet in height and 4 feet in width.

The stem and leaves of the succulent Senecio bush are covered with white hairs, which help protect the plant from the hot African sun. The leaves are thick and fleshy, ranging in color from green to blue-green. The Senecio bush has small and yellow flowers, appearing in clusters at the ends of the stems.

The genus name Senecio comes from the Latin word “Seneca,” which means “lend a hand.” The succulent shrub known as the Barbertonicus succulent bush Senecio is thus named after its home region, Barberton in South Africa.

The most important thing to remember is that this plant likes bright, indirect light regarding Senecio care. It can tolerate direct sun, but too much sunlight will cause the leaves to scorch. Therefore, if you live in an area with scorching summers, it’s best to provide some afternoon shade for your plant. 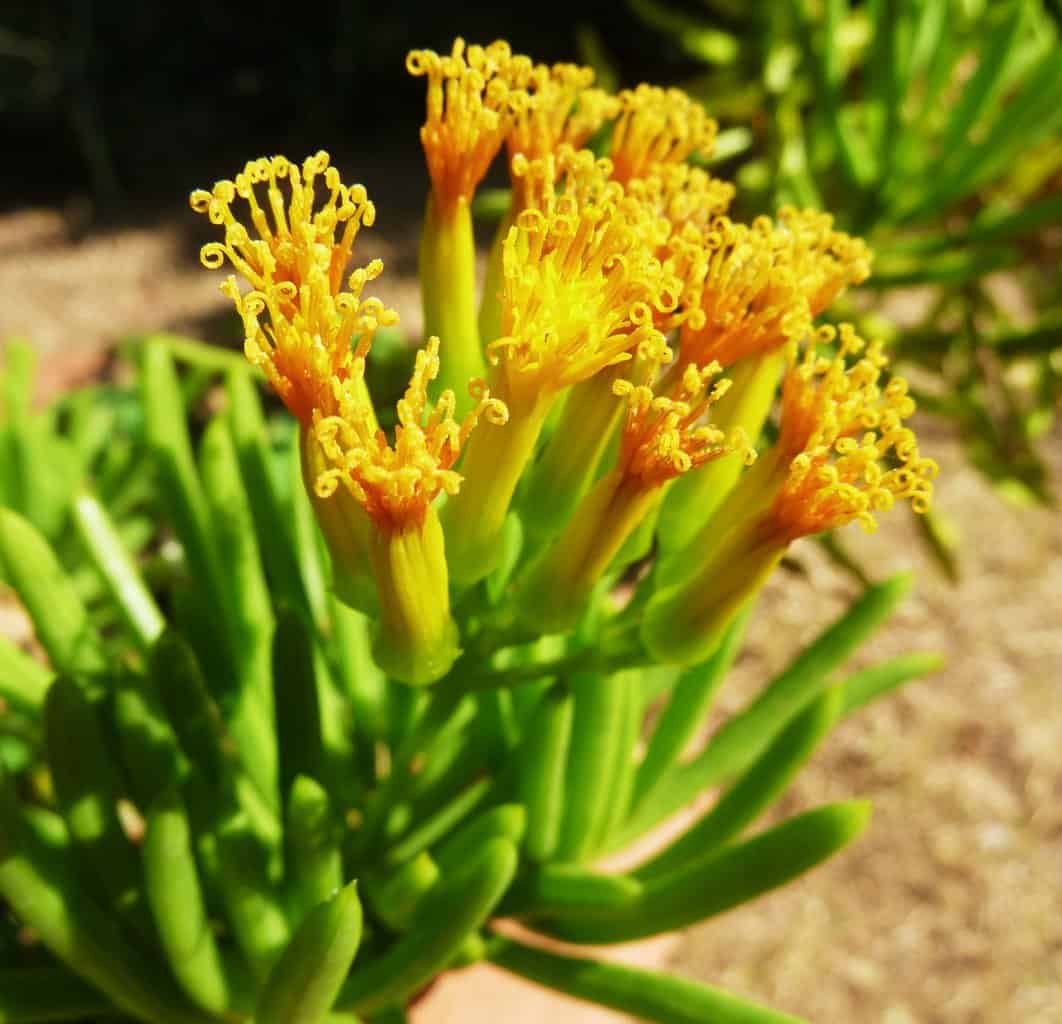 The Senecio barbertonicus is a succulent, storing water in its leaves. As such, you’ll want to be careful not to over-water your plant. If the leaves of your Senecio bush start to look wilted or yellow, that’s a sign that it’s not getting enough water.

Conversely, if the leaves start to look mushy or bloated, that’s a sign that you’re over-watering your plant. You should only water your Senecio bush once every two weeks and ensure the soil is completely dry before watering again.

The Type of Soil That Succulent Bush Senecio Needs

Since the Barberton Senecio bush is a succulent plant, it needs sandy, well-draining soil. You can purchase cactus or succulent potting mix from your local nursery or garden center or make your own by mixing together equal parts sand, peat moss, and perlite.

Once your potting mix is ready, it’s time to repot your Senecio bush. First, choose a pot with drainage holes in the bottom slightly larger than the current pot. Next, gently remove your plant from its existing pot and loosen any roots that are bound up.

Place your Senecio bush in the new pot and fill in around the roots with your potting mix. Water your plant thoroughly, being careful not to over-water.

How Much Light Does a Succulent Bush Senecio Need? 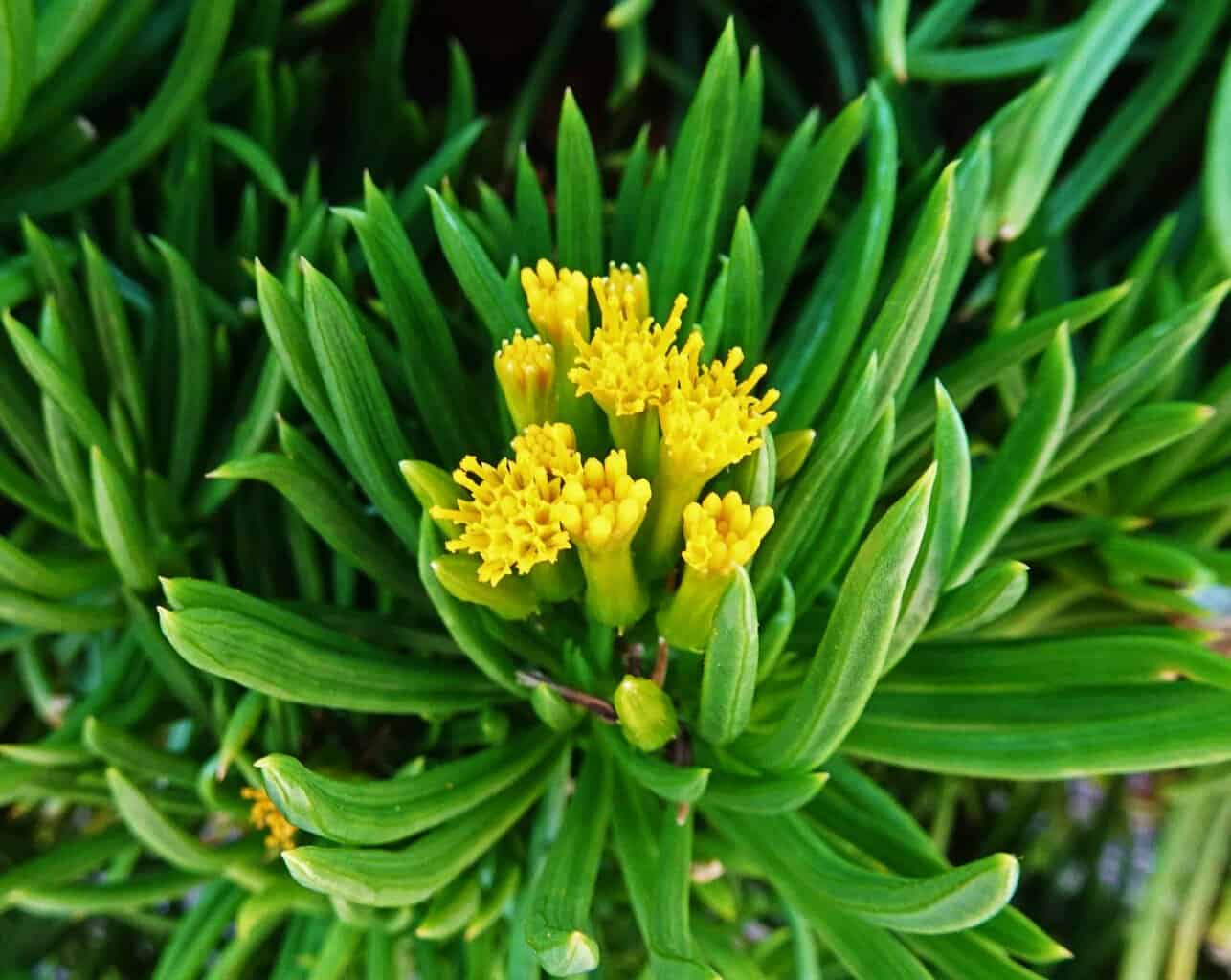 These succulent plants prefer bright light but can tolerate some direct sunlight. If you live in a scorching climate, you may want to provide some afternoon shade for your plant.

How To Water Succulent Bush Senecio

You should only need to water your plant once every two weeks. During the winter months, you can reduce watering to once a month.

Since succulent plants are such slow-growing, they don’t need a lot of fertilizer. But unfortunately, too much fertilizer can do more harm than good. 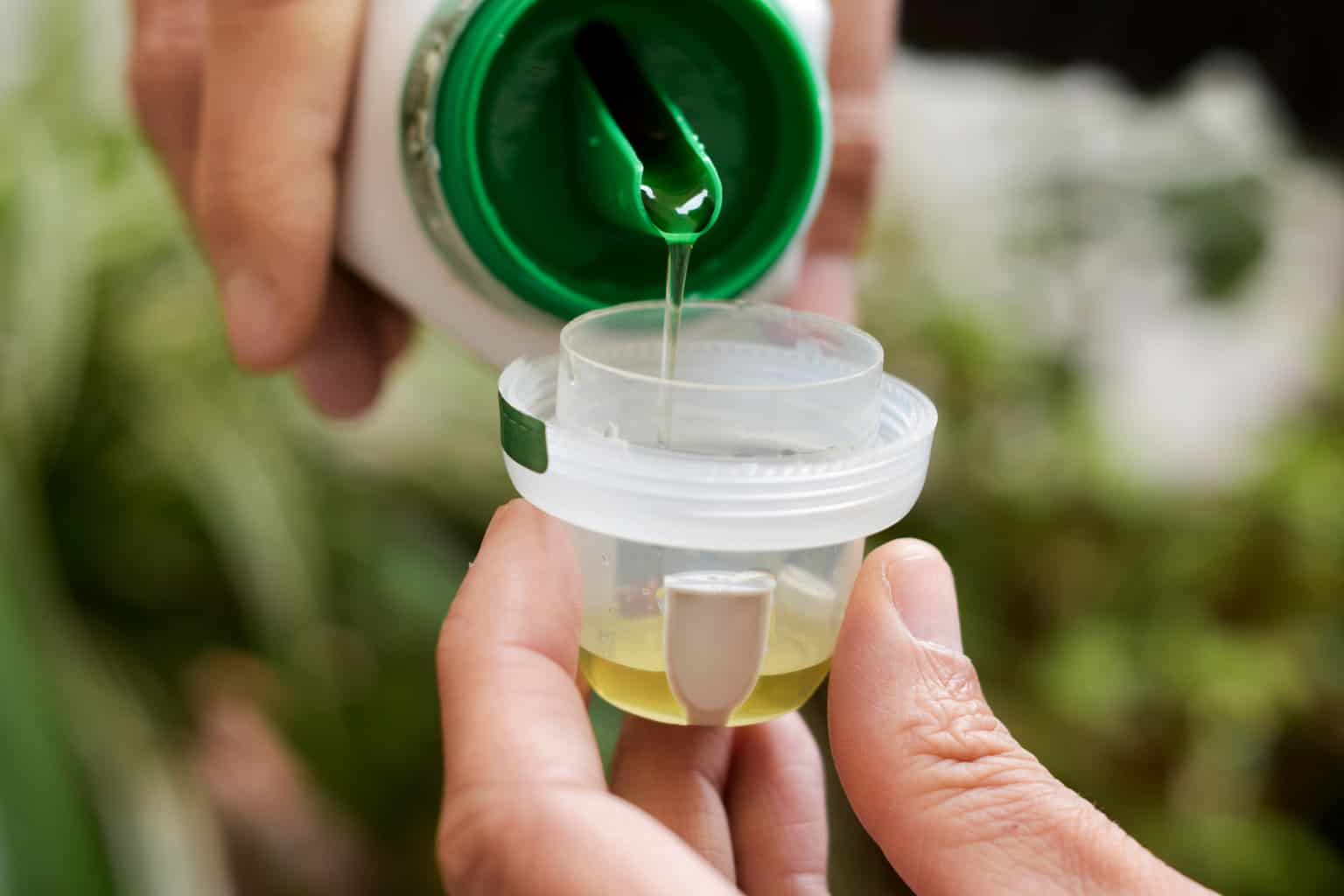 If you decide to fertilize your succulent Senecio bush, you should only do so once a year in the springtime. Use a succulent or cactus fertilizer diluted to half strength and apply it to the soil around your plant.

Well-draining soil is vital regarding the type of soil that your Senecio bush needs. Succulents don’t like to sit in wet, soggy soil, so make sure the pot you’re using has drainage holes. In addition, you can add perlite or pumice to your potting mix to help drainage.

Succulents like it on the hot and dry side, so there’s no need to worry about providing extra humidity for your Senecio bush. But on the other hand, too much moisture can lead to fungal problems.

As far as temperature goes, this plant can tolerate a wide range of temperatures, from 50 degrees Fahrenheit up to 100 degrees. On the other hand, Senecio barbertonicus succulents should not be placed in full shade. To stay healthy, they require at least six hours of direct sunshine each day.

As we mentioned earlier, succulent plants like to be pot-bound, so you won’t need to repot your Senecio barbertonicus succulent bush very often. You should only need to repot every two or three years.

When it comes time to repotting, be sure to use a pot that is slightly larger than the current pot and has drainage holes in the bottom. Gently remove your plant from its pot and loosen any roots that are bound up.

Place your Senecio bush in the new pot and fill in around the roots with succulent or cactus potting mix. Water your plant thoroughly, being careful not to over-water.

To propagate Senecio barbertonicus, you can take softwood cuttings or leaf cuttings. For softwood cutting, snip off a 3-4 inch piece of stem and allow it to be callous for a few days.

Once the cutting has been calloused, you can pot it in the succulent or cactus potting mix. Keep the cutting moist until it has rooted, and then you can begin watering it as you would a mature plant.

Start by gently twisting a healthy leaf from the stem to propagate from leaf cuttings. Allow the leaf to be callous for a few days, and then pot it in succulent or cactus potting mix.

As with stem cuttings, keep the leaf moist until it has rooted, and then begin watering it as you would a mature plant.

There are a few different varieties of Senecio that are commonly grown as houseplants, including: 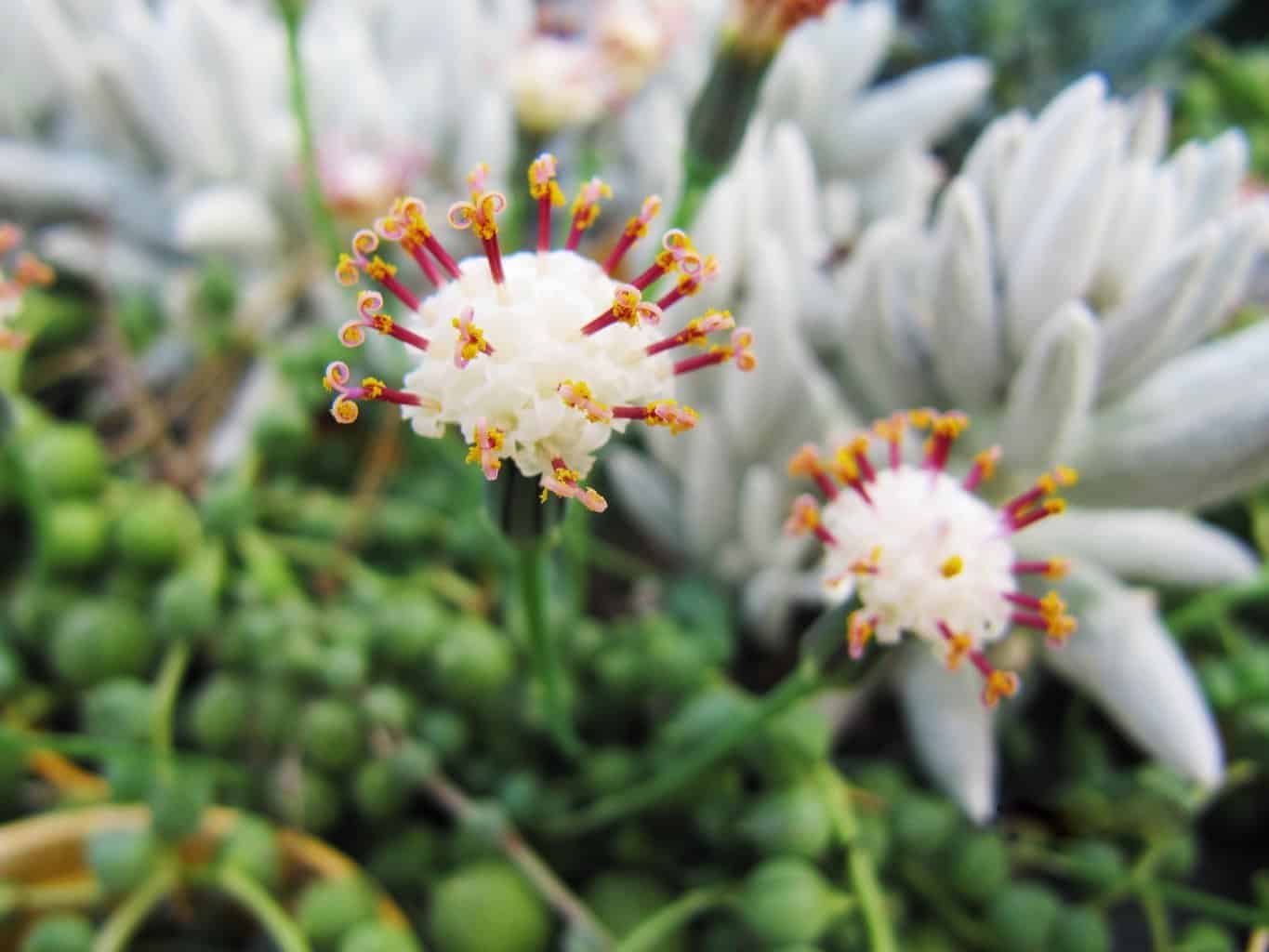 This variety is also known as “string of pearls” or “string of beads.” It has small, round leaves strung together on long, slender stems. 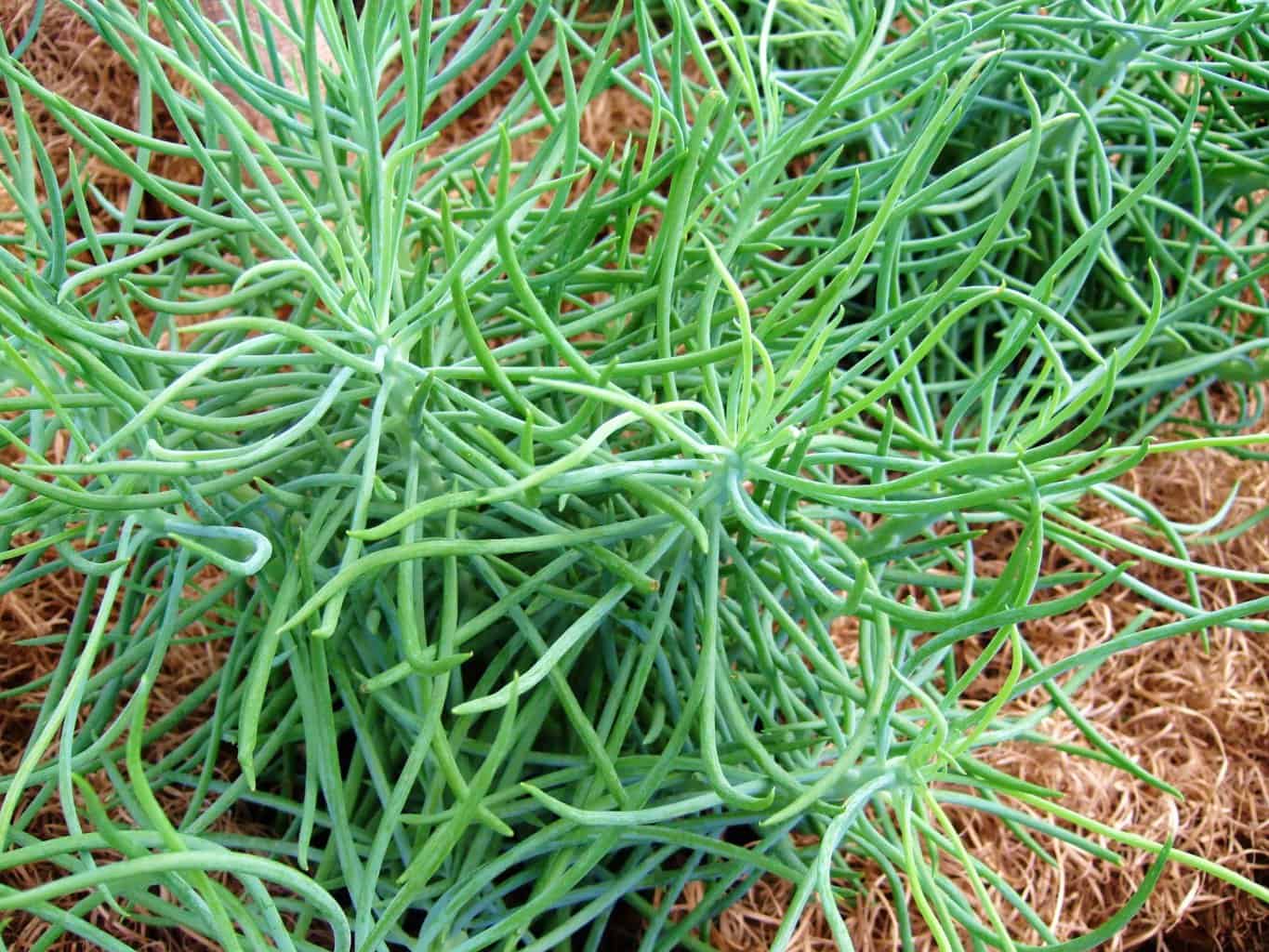 This variety is known as the “hot dog cactus.” It has long, thin stems covered in small, round leaves. The flowers are yellow and clustered together at the ends of the branches. 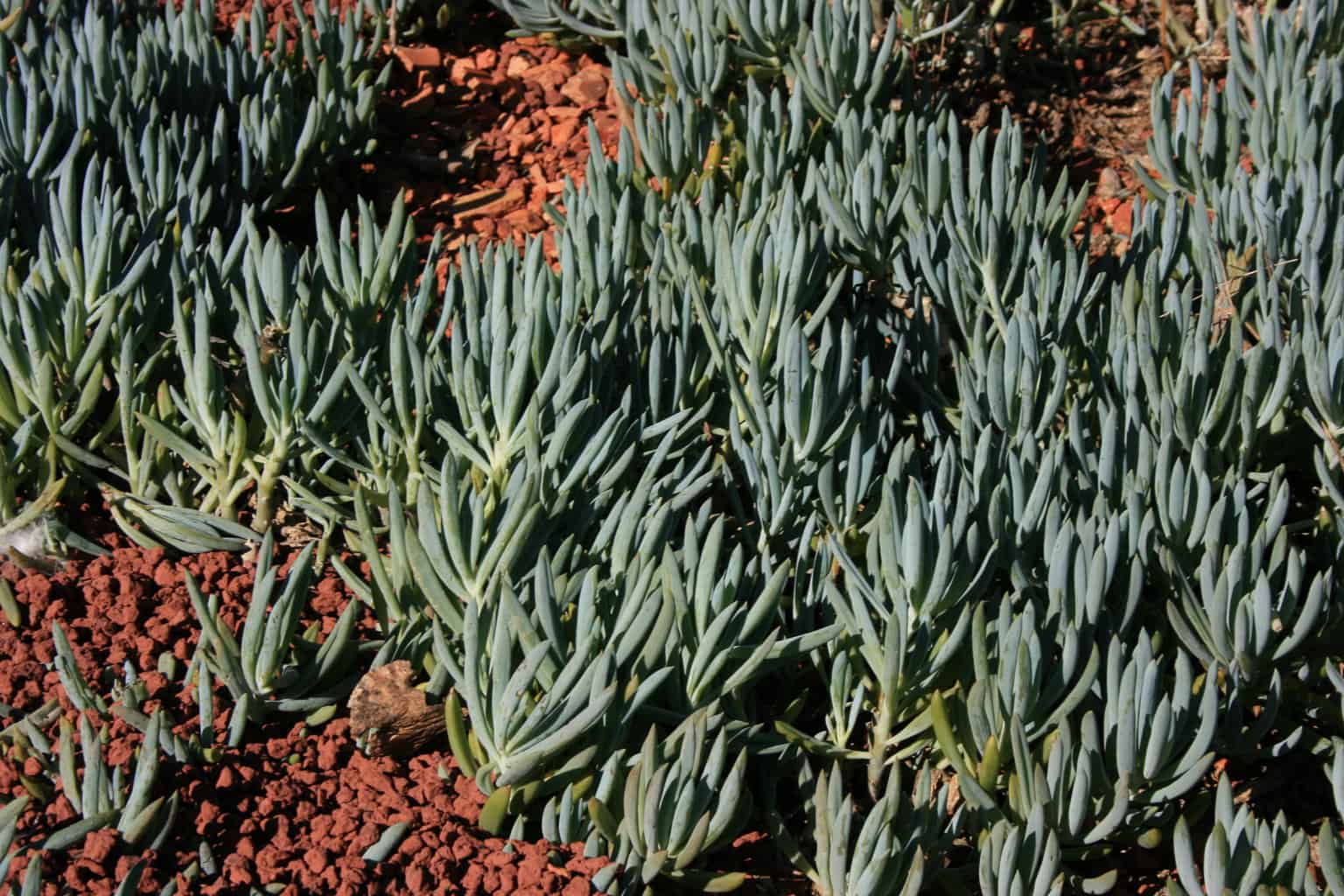 This variety is known as “blue chalk sticks.” It has long, slender branches covered in small, blue-green leaves. The flowers are yellow and clustered together at the ends of the stems.

Succulent bush Senecio plants are relatively resistant to pests and diseases but can occasionally be bothered by mealybugs, scale insects, or aphids. You can control these pests with insecticidal soap or put neem oil.

Senecio barbertonicus plants are also susceptible to root rot, so be sure to plant them in well-draining soil and water them only when the soil is arid. If you notice any signs of root rot, such as yellowing leaves or mushy stems, remove the affected plant from the pot and let the roots dry out entirely before replanting.

As far as where to buy your Senecio bush plant, your best bet is a garden center or nursery that specializes in succulents. You can also purchase succulents online from several different retailers.

Make sure to research before purchasing a plant, as some varieties can be pretty sensitive and challenging to care for. We recommend starting with a Senecio rowleyanus or Senecio mandraliscae, two of the most accessible types to care for.

With proper care, your Senecio bush indoor succulent will thrive for many years!

I'm an SEO expert and a Content Manager prodigy. I've been around the block writing blogs for Men's Magazine, Real Estate, Architectural and other major uprising niches. Becoming a plant enthusiast and an environmentalist myself gives me the edge of writing about them.

San Diego Botanical Gardens: Everything You Need To Know

Zilker Botanical Garden: Everything You Need To Know

Florida Botanical Gardens: Everything You Need To Know

Best Winter Plants To Grow In Your Garden

McKee Botanical Gardens: Everything You Need to Know