All around the world, the pilgrims were not the only settlers even in America, and with them came exotic plants. A fact is that one-third of North American plants are alien.

While they behave in the landscape, some are invasive plants that are aggressive growers choking the indigenous plants posing a threat to our native ecosystems.

So as a gardener, we have to join the growing movement to stamp out these invasive plants. To help, we compiled a list of the best substitutes for these offenders. 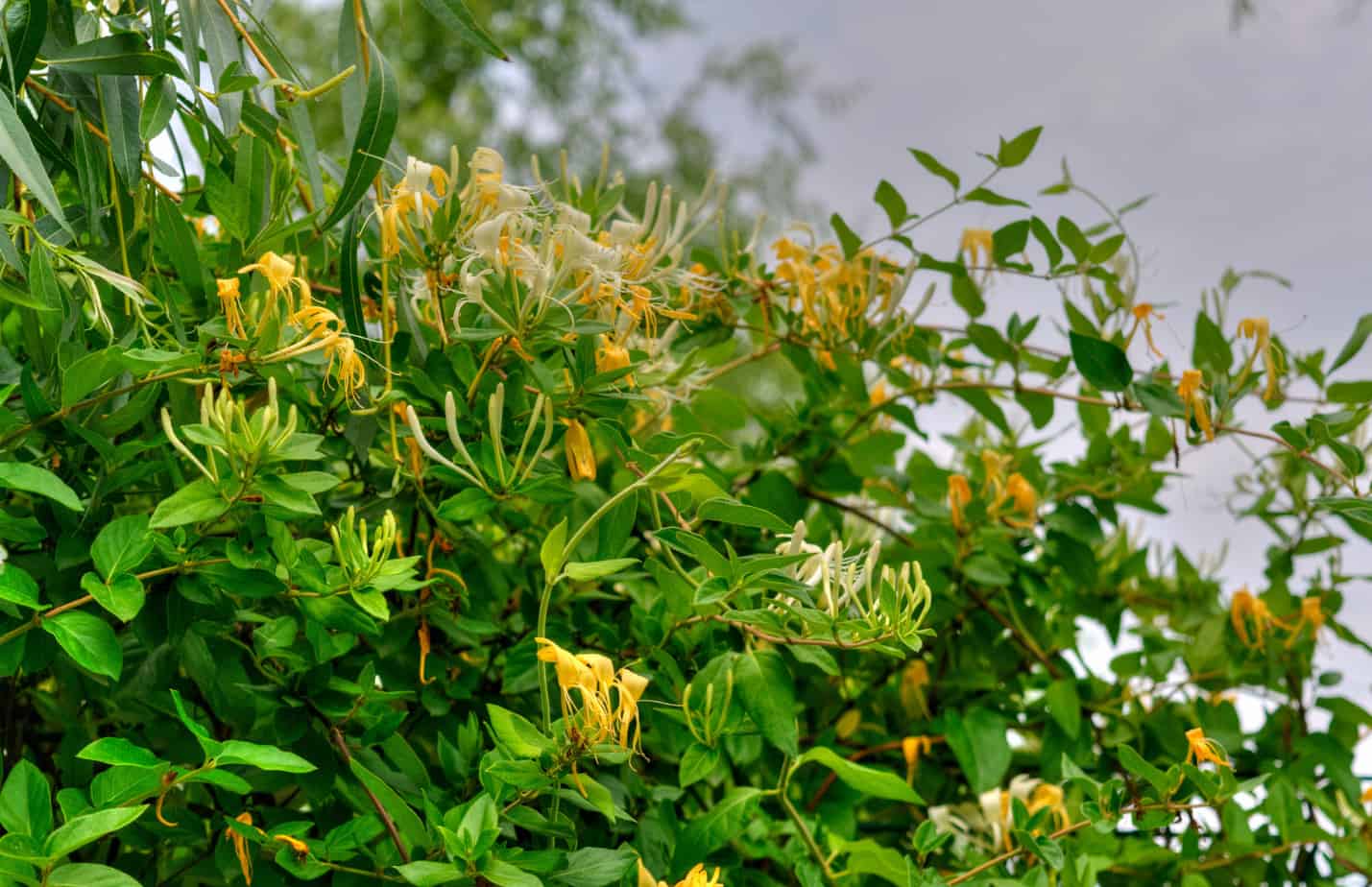 Yes, we all love the Japanese honeysuckle as it has sweet-scented flowers. However, it is a vigorous vining plant that quickly gets out of hand in your garden. A fact is that the invasive species blanket trees to shade out the native species.

An interesting note is that the plant made its way to the USA in 1806 to help control erosion and guess what? Now, it is a problem in 26 states. So instead, grow these native alternatives to invasive plants here: 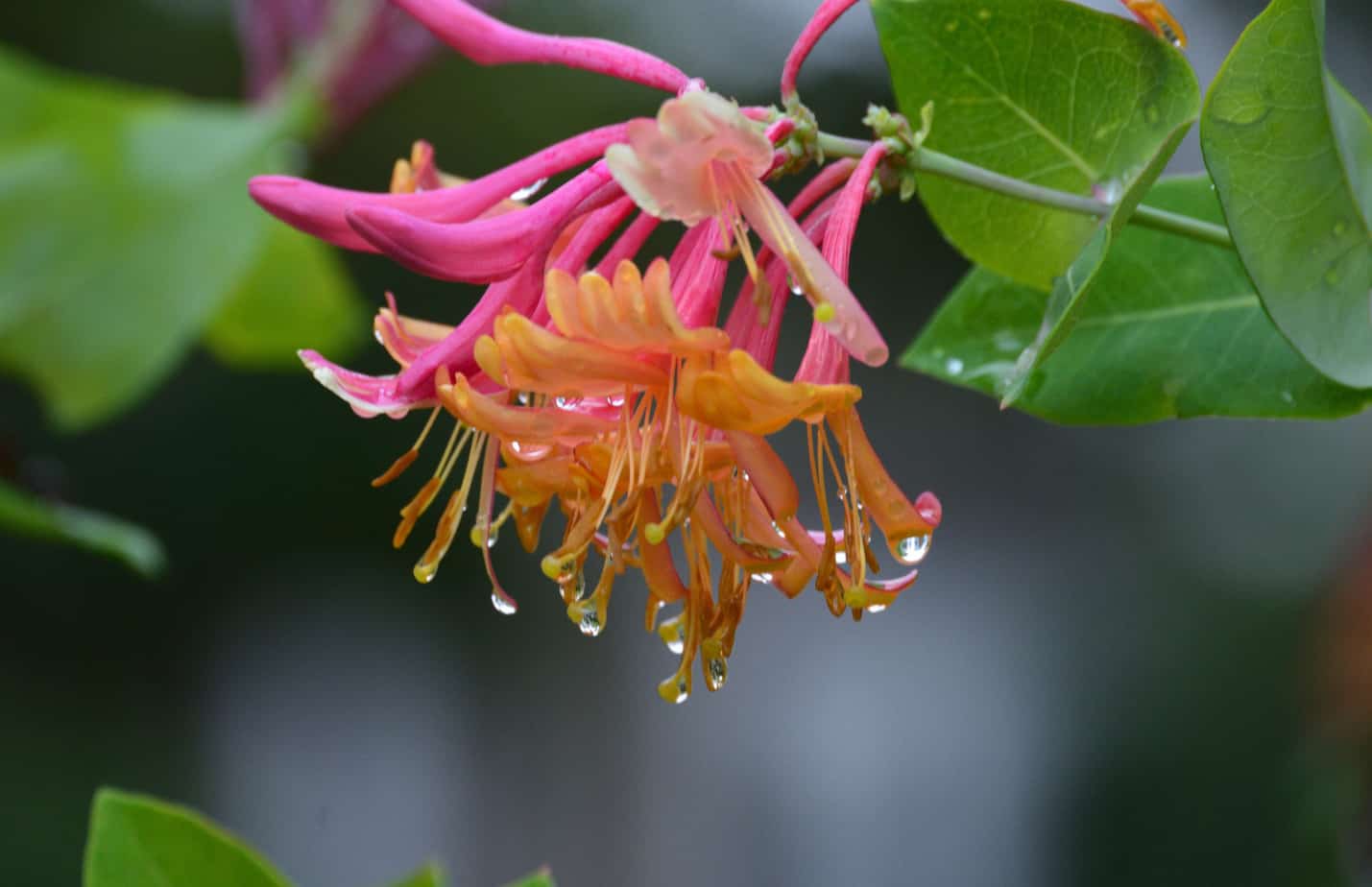 The trumpet honeysuckle is similar foliage and also a smelling vine. Some gardeners refer to them as the coral honeysuckle.

You find the native plant growing in the southern parts, and you can grow them in the USA hardiness zones 4 to 9.

One thing this vegetation does is lure different wildlife especially birds. They love the red flowers, while others enjoy feasting on the berries after the flowers fade.

However, do not get confused with the Campsis radicans, the trumpet vine with tubular orange-red flowers that is invasive in the southeast. 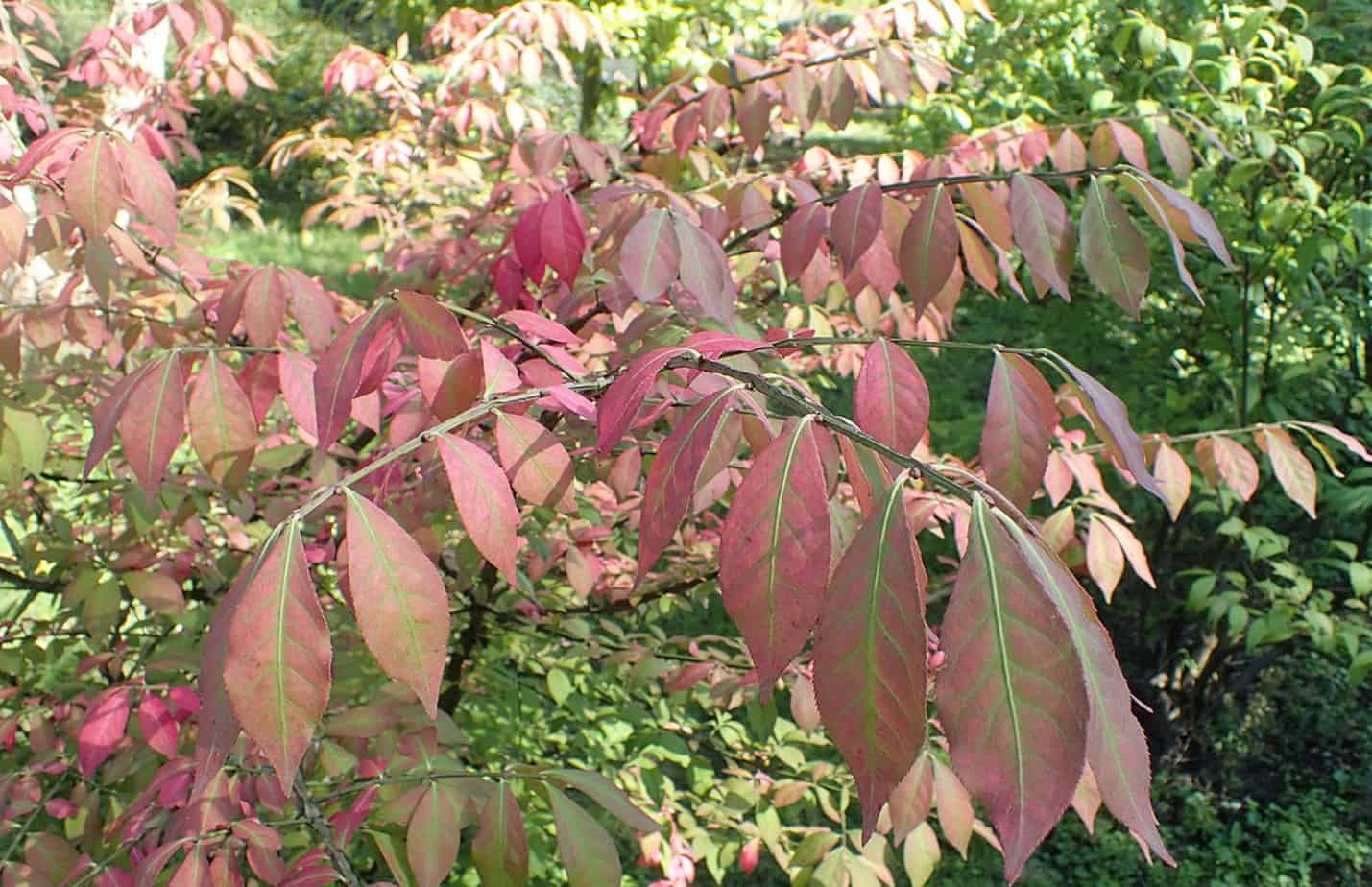 The burning bush is an adored invasive species as it attracts birds that love the fruit. It is an Asian native and has a fast-spreading form with seeds. Still, it is a threat in most states east of the Mississippi as the shrub takes over the native forests, coastal scrublands, and fields.

Yes, it is an ornamental shrub found in many gardens, but it pushes out the native species that provide food and shelter for the wildlife. So, instead, use the following alternatives to invasive plants here. 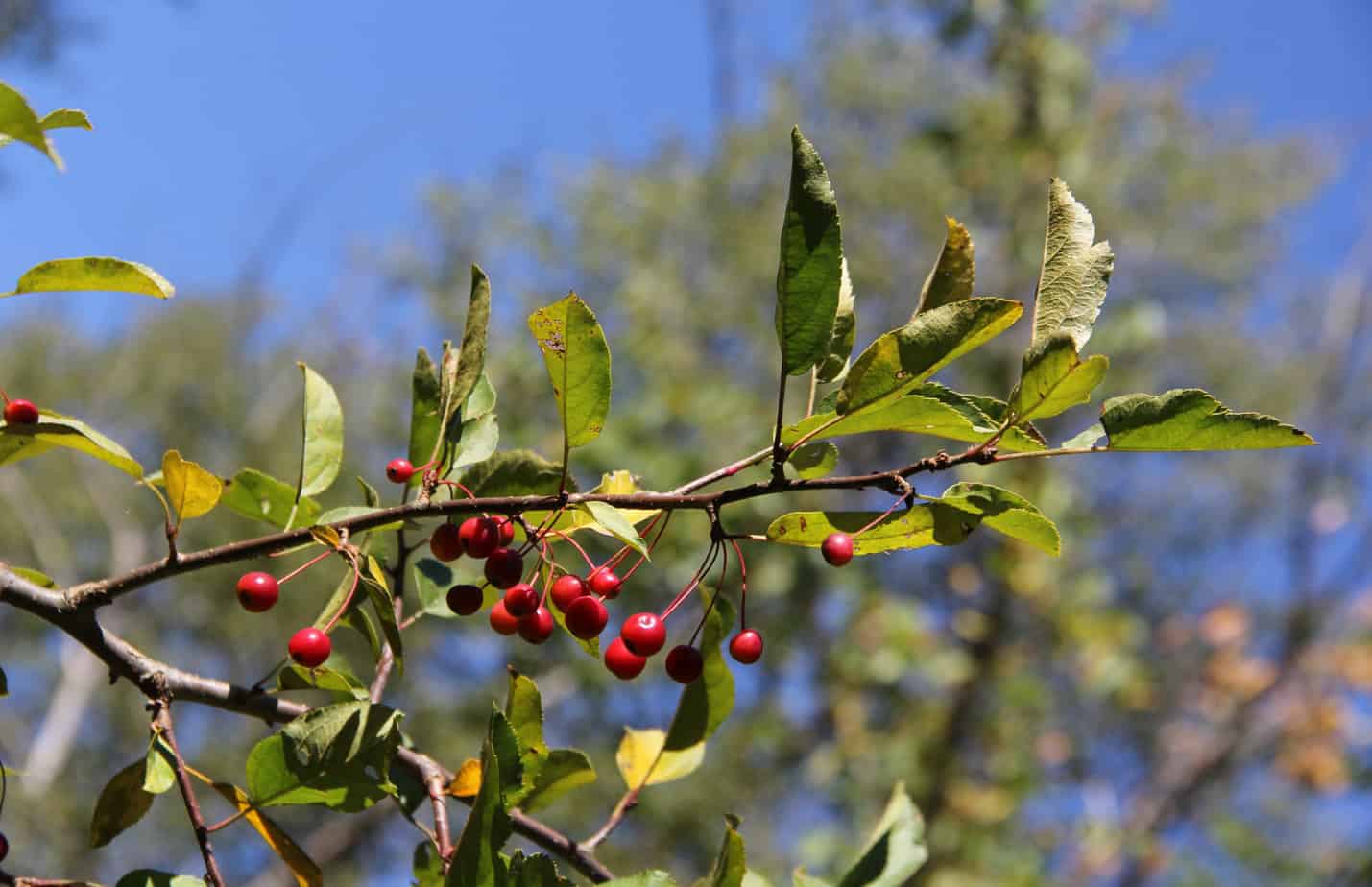 To get a fabulous fall color without ecological destruction, we recommend chokecherry. It is native to North America found flourishing from Newfoundland to Tennessee.

You can plant them in the USDA hardiness zones 2 to 10 to produce bright orange yet red leaves during fall. It carries scarlet berries and grows up to 20 feet tall in the summer.

Plus, it provides food for the wildlife, from adult butterflies songbirds to silk moths. 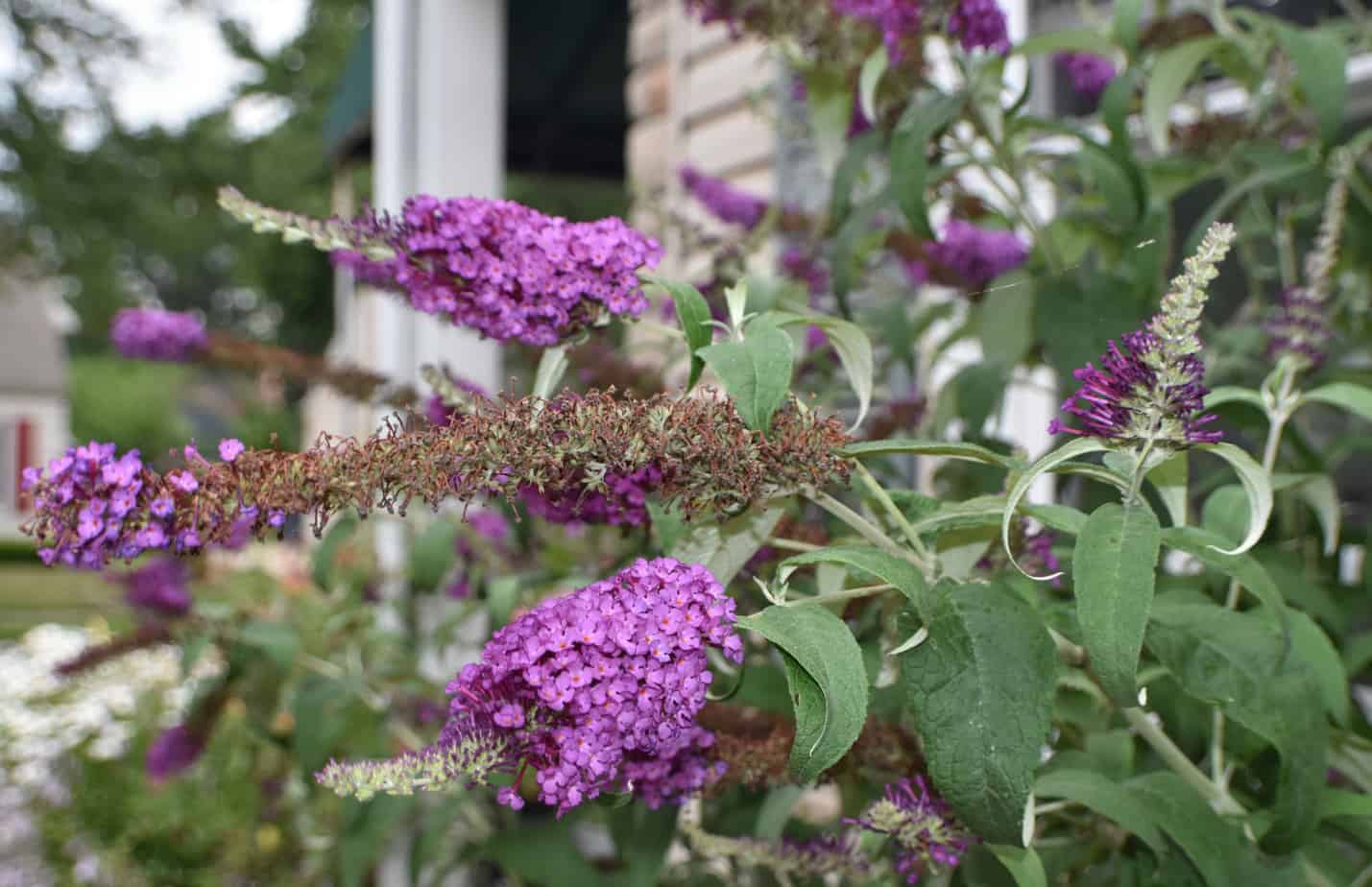 Why the butterfly bush is a good attraction for butterflies and bees, it also excels at spreading seeds everywhere.

It is a Chinese native found listed in 20 states as invasive even on the West Coast. It takes over stream areas to woodlands pushing out the native plants.

The other problem is while adult butterflies feed on the nectar, it crowds out other plants that feed butterfly larvae.

So, instead, use the following native substitutes. 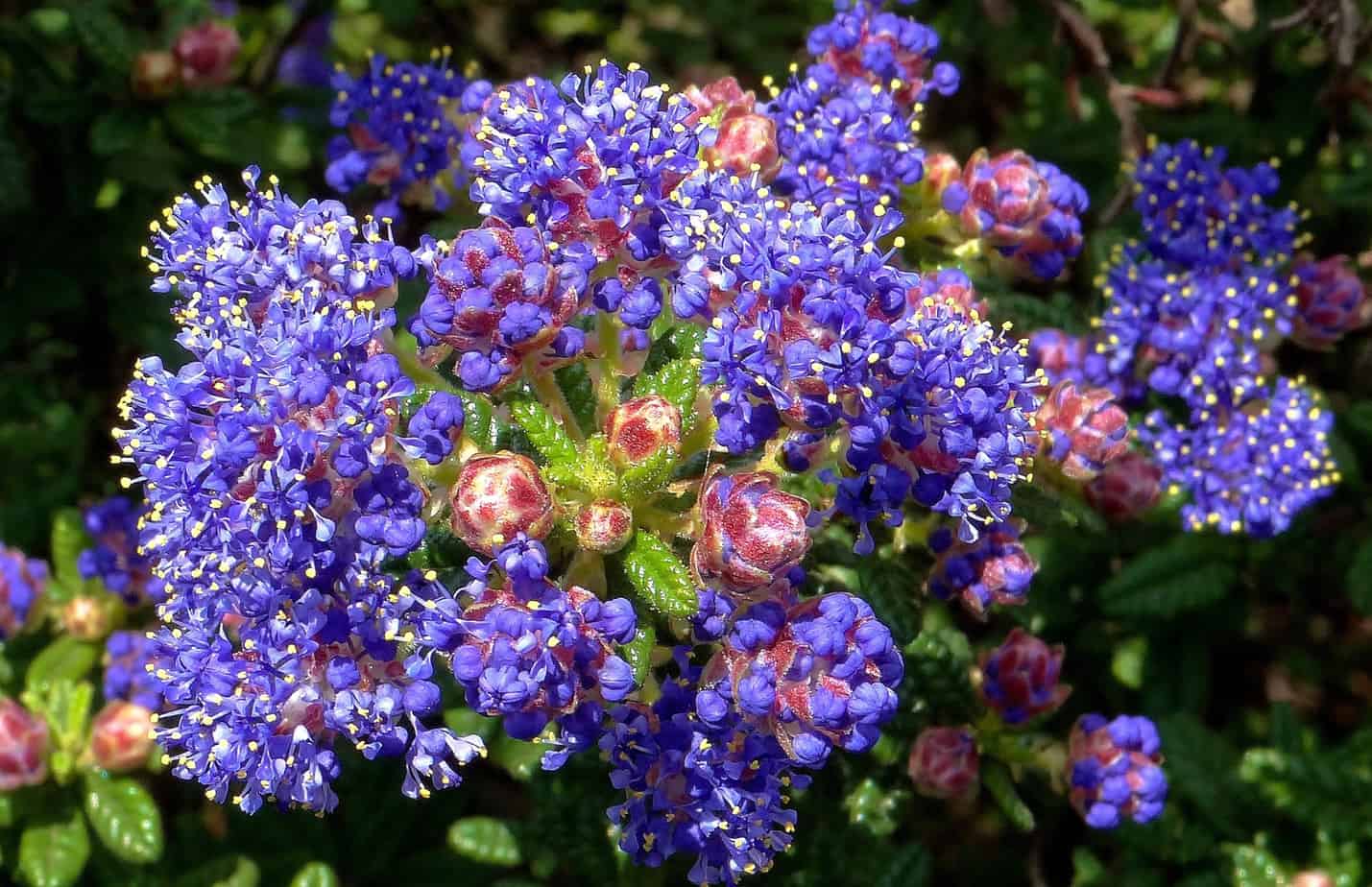 Instead, you can plant the California lilac to feed butterflies at all stages of their life. You find them with blue-purple blooms, and it is not an aggressive grower. The vegetation is found in California and also other parts of the country.

While the plant is not a true lilac, it is part of the Buckthorn family and very hardy yet drought-tolerant in the USDA hardiness zones 8 to 10. If you live in zone 7, you can plant the Victoria cultivar as it is cold-hardy. 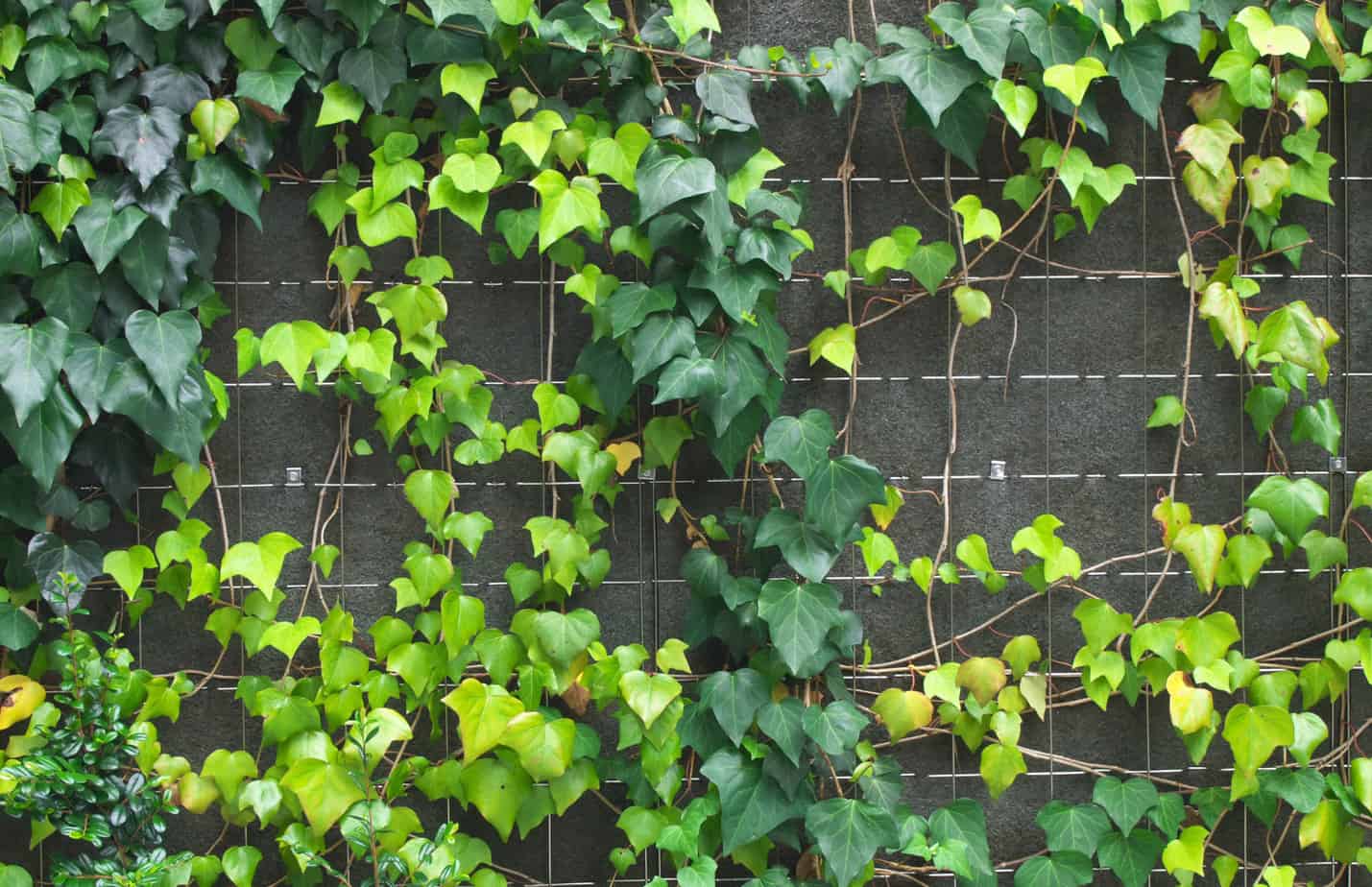 Who thought the English ivy causes nightmares in landscapes? Once it gets loose in the forest, it chokes trees and creates a dense undercover where nothing grows. Furthermore, it becomes a haven for rats when grown in the garden.

The plant also thrives in warmer climates as it is not as cold as in Europe, where it comes from. In addition, it is similar to the kudzu invading the South and also has a pedigree of its own. 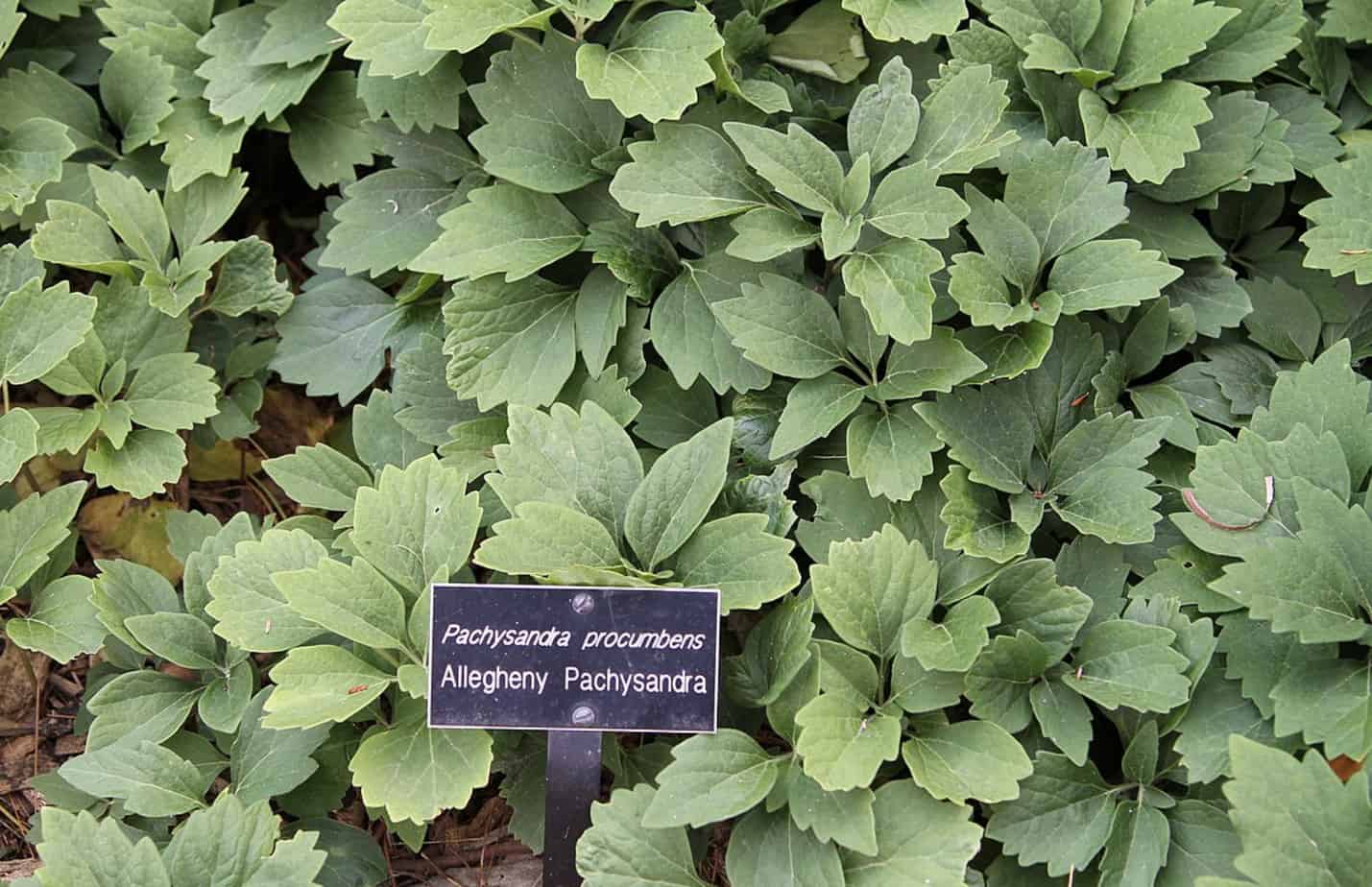 The mountain spurge or as many know it, Allegheny spurge, are great native alternatives to grow in the garden. It is an evergreen perennial that is an excellent groundcover. You can grow them in a shady area producing lovely white blooms during spring.

It will not take over everything as it is a slow grower. The plants are native to the Eastern United States and grow happily in zones 6 to 8. Do not confuse yourself with the Pachysandra terminalis called the Japanese pachysandra with a similar look and is invasive. 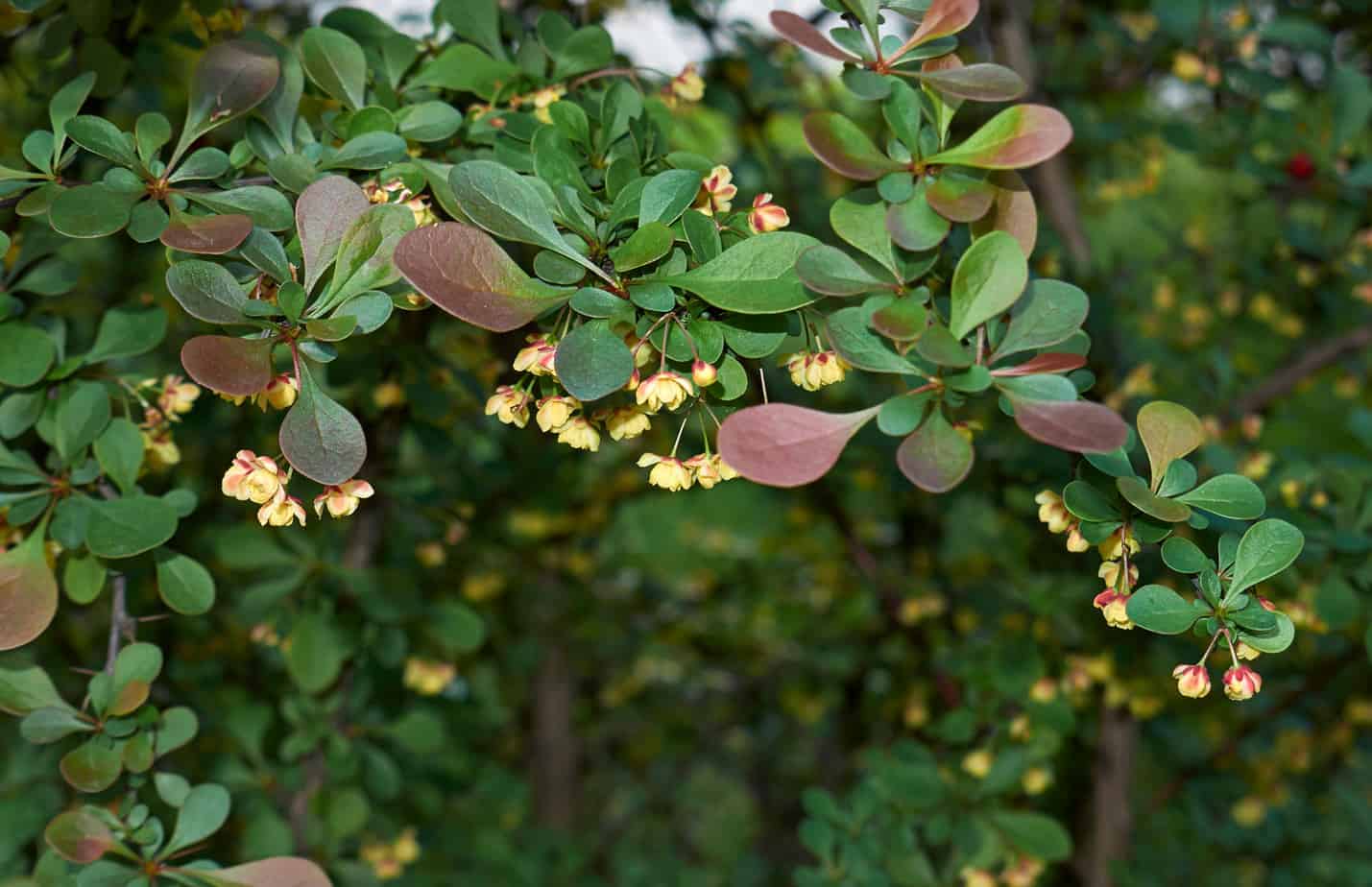 The Japanese barberry has red leaves and berries, bringing color to your fall garden. Like most other alien plants, it came to the USA with good intentions.

Settlers introduced the plant in natural areas in 1875 in Boston to replace other varieties causing damage to wheat crops.

One hundred years later, the plant is now invasive in most parts of the eastern and midwest of the U.S. 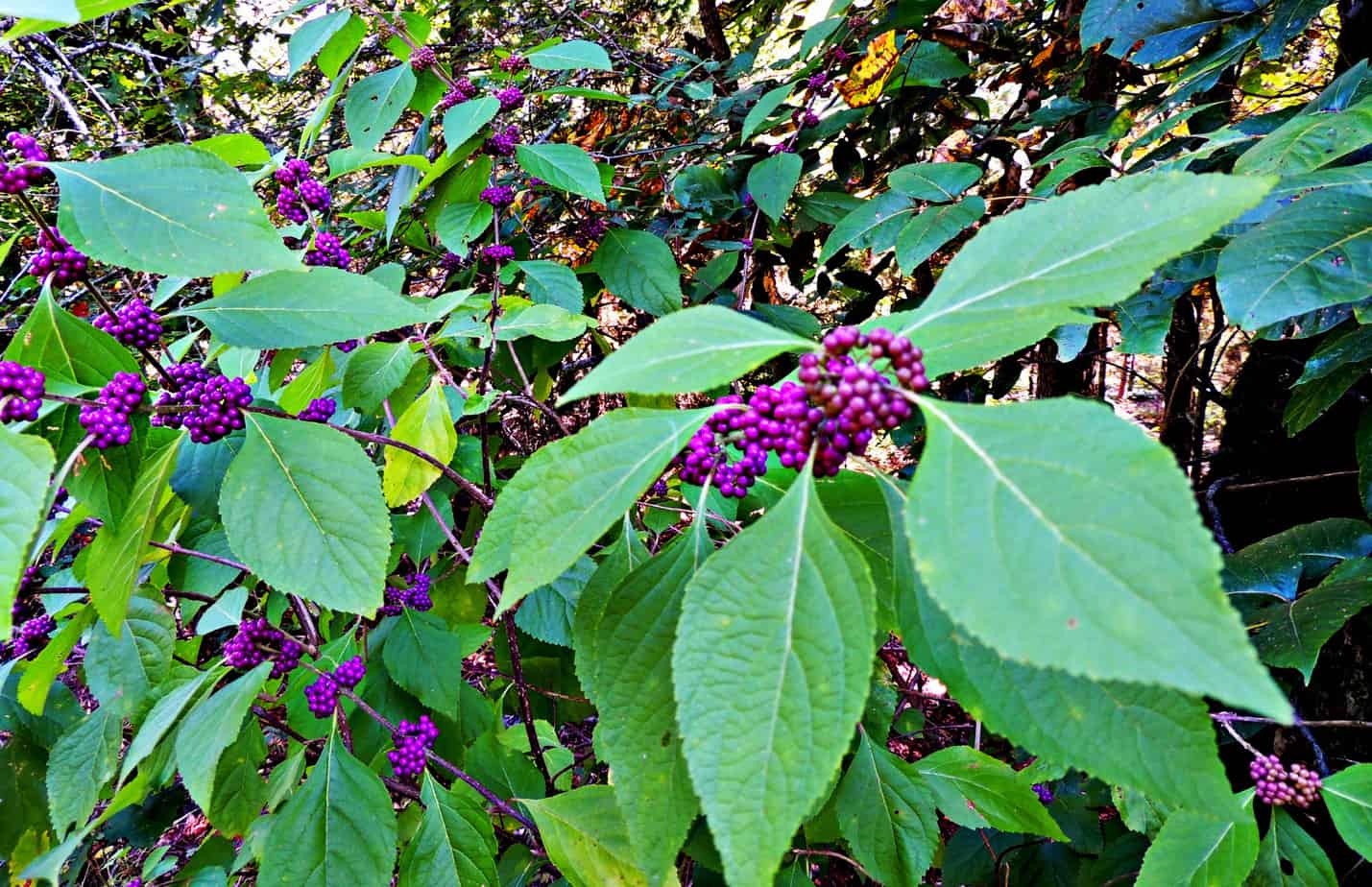 The beautyberry and other plants like the New Jersey tea are great alternative plants to grow in your garden. They add color to fall landscaping as well. The beautyberry has bright purplish berries, and you can grow them in zones 5 to 10.

During fall, the foliage turns a magenta-purple. The plant’s berries and native seedlings are essential as a food source for deer, squirrels, and songbirds. In addition, the plant blooms in spring and summer to attract native insects like butterflies. 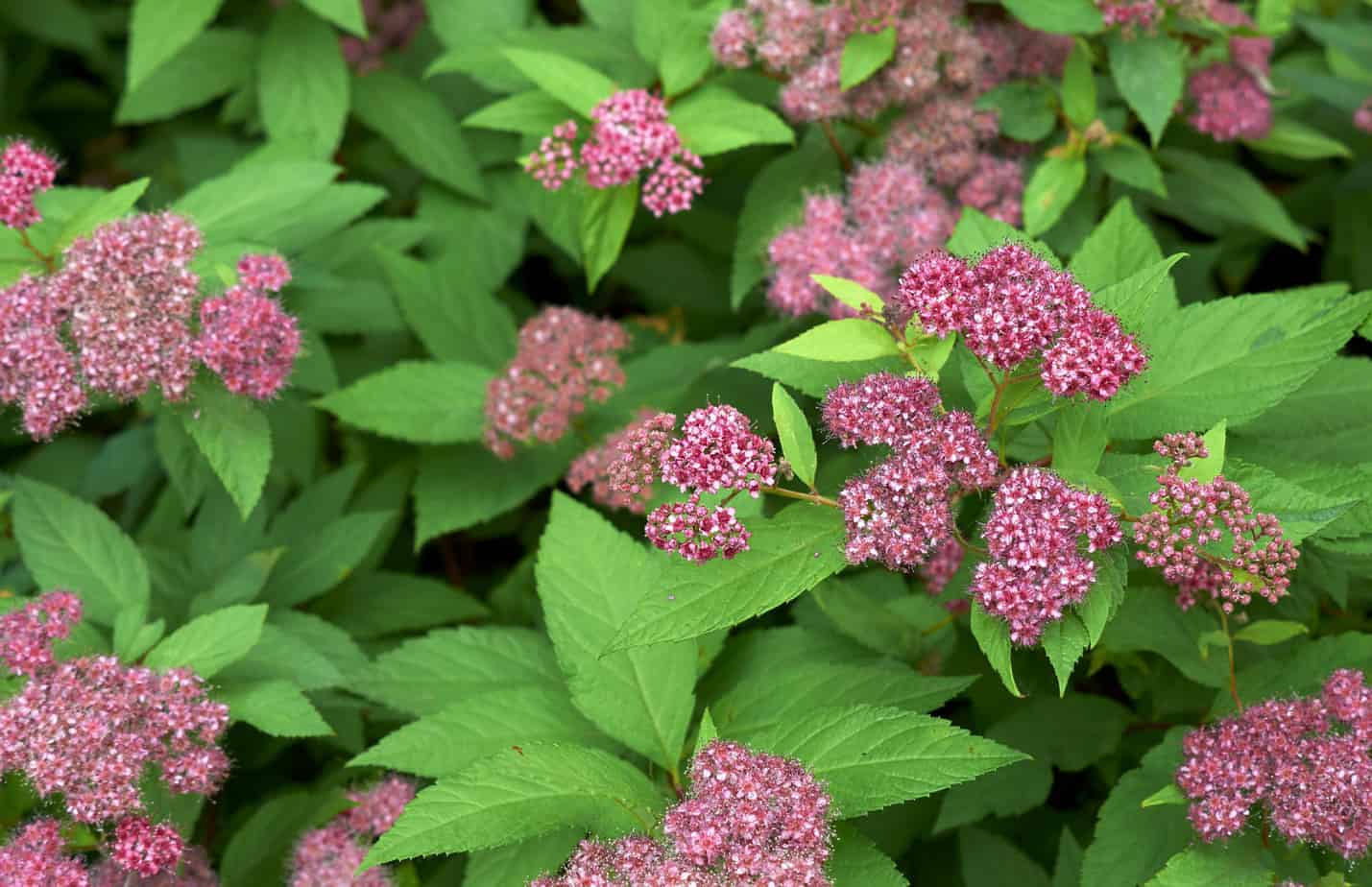 Yes, it is an old favorite Japanese spirea growing in many gardens. In spring you see it blooming white and pink flowers. In fall, the foliage turns orange, yellow, and red. People brought the intrusive plant in the 1870s in the U.S., taking over landscaping in the mid-Atlantic states.

Instead of growing the Japanese spirea grow the Virginia sweetspire with its fragrant white flower blooming in early summer. In fall, you find the leaves filling up the landscaping with a lovely color display. These native plants you find in the southeastern United States.

They are easy to care for and very drought-tolerant to grow in zones 3 to 7. The shrub reaches up to four feet tall and wide. Or, another native alternative to invasive plants is the Henry Garnet which remains compact about three feet tall with purplish-red color in fall. 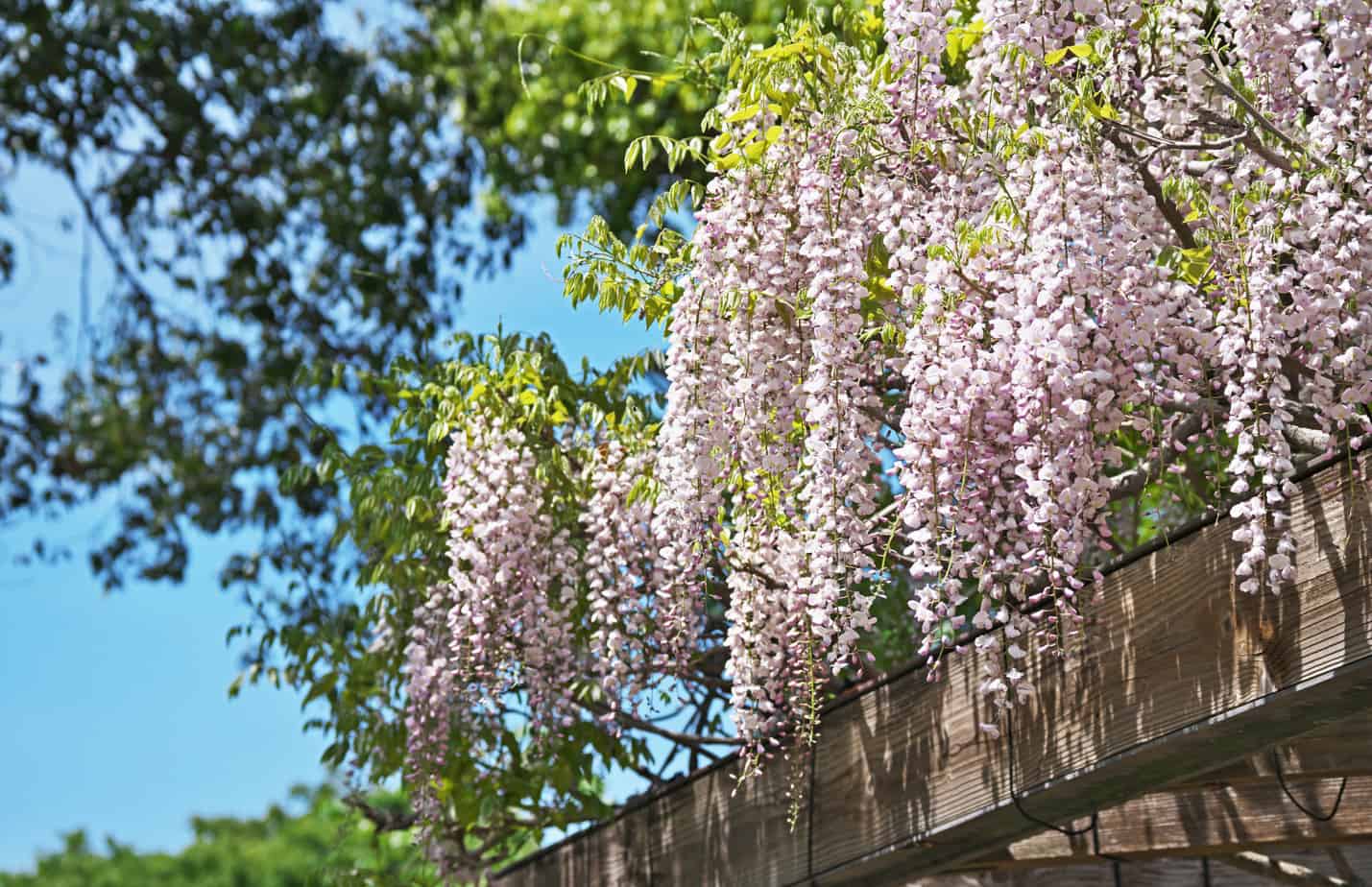 Who does not love the Japanese wisteria? Everyone does. It has sweet-smelling purple blooms dripping from the vigorous vines in spring. Settlers introduced the plant in 1830, all the way from Asia.

Unfortunately, it escaped into the wild, leaving trails of destruction in 19 states. These vines can live for years, 50 to be exact. They rapidly grow and overtake anything in their path to girdle and overshade our native plants. 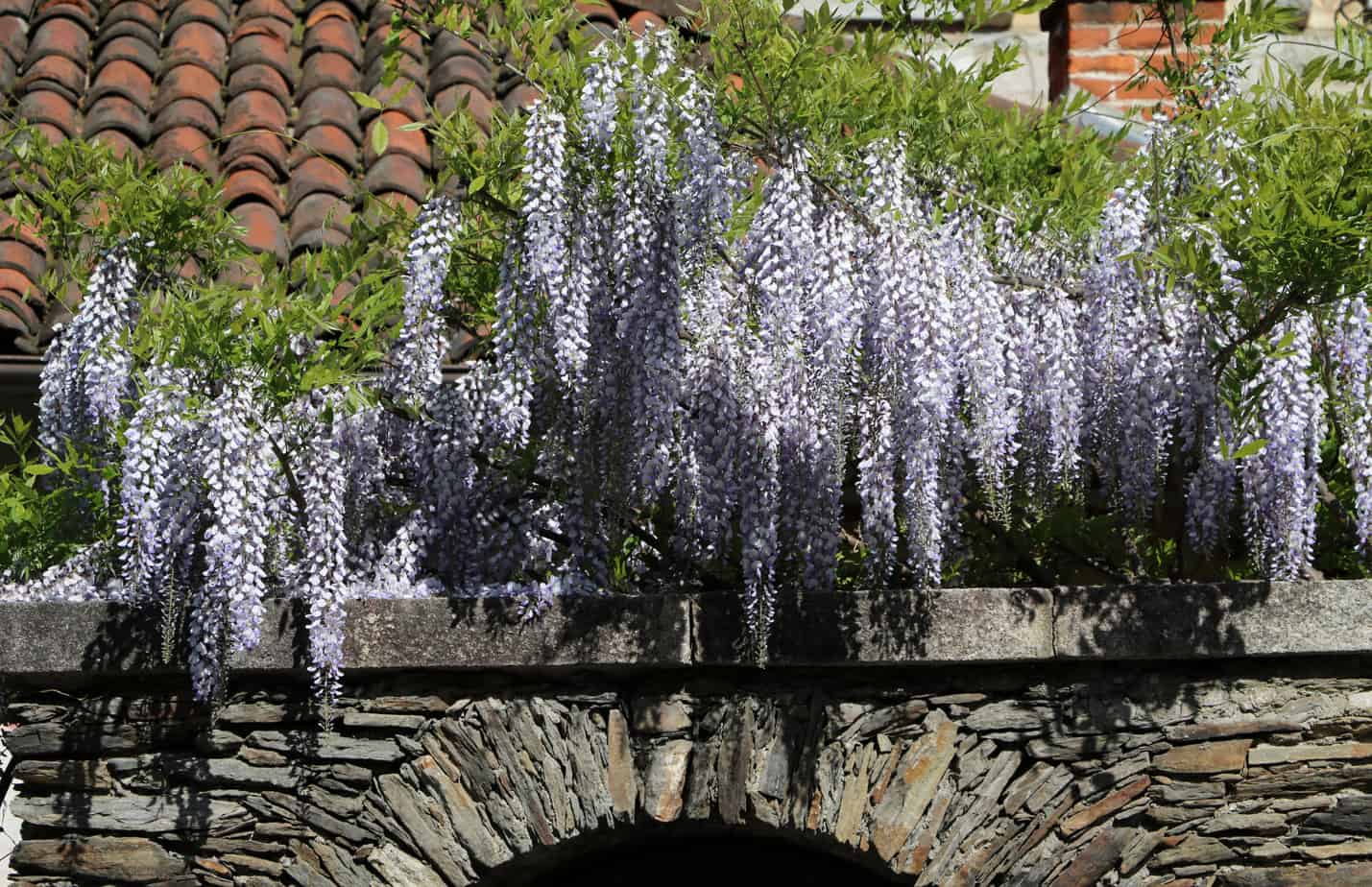 For a drooping yet romantic purple flower blooming in your garden, the American wisteria is what you need to grow.

While it belongs to the same family as the Asian plant it is not as aggressive when growing. You can grow them in zones 5 to 9, training them to climb columns, arbors, and walls.

Even the clusters are smaller than the Asian species and just as fragrant. The plant attracts pollinators from different butterfly species. Another greenery that is also great to grow is the Kentucky wisteria. 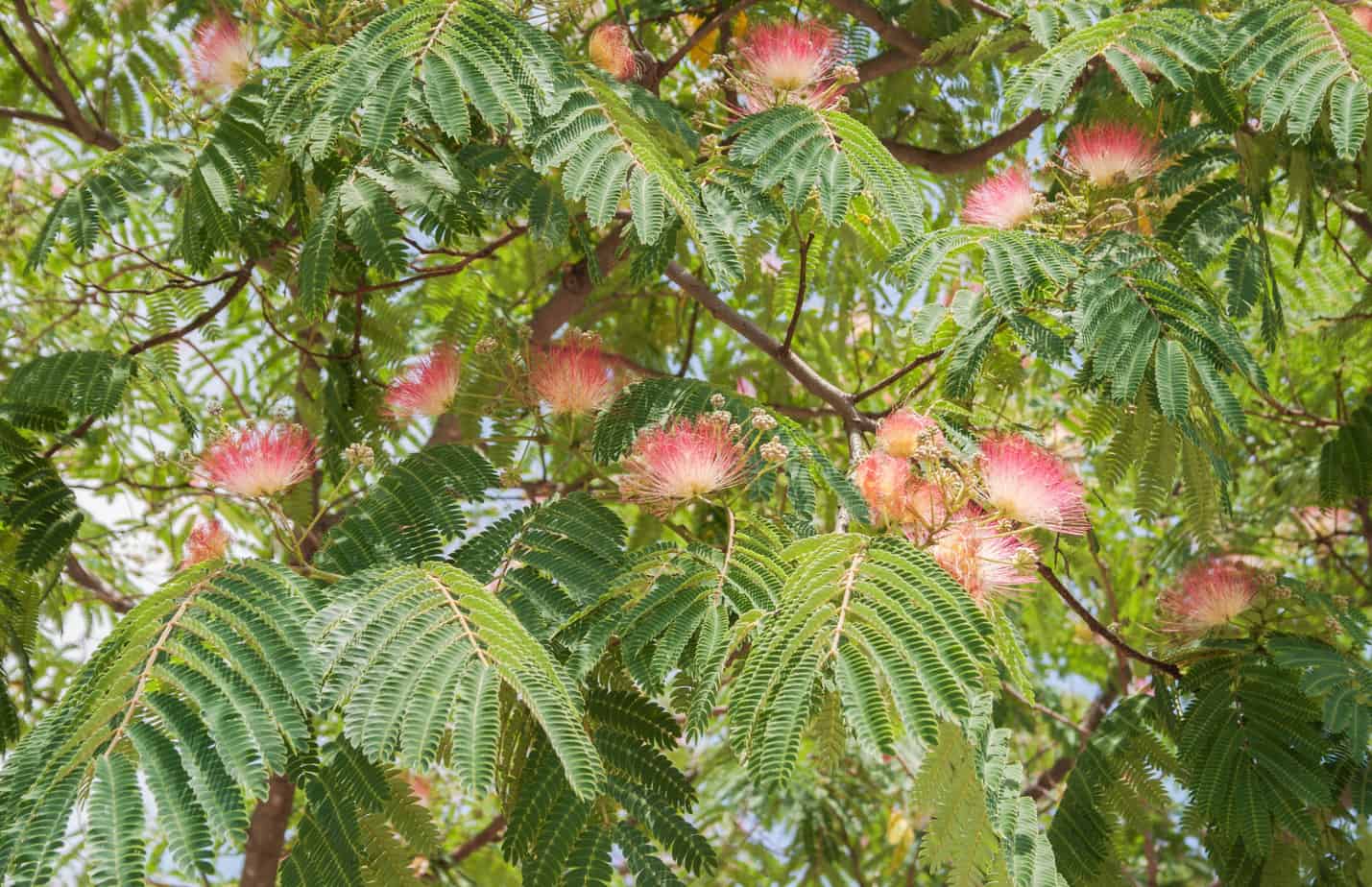 The mimosa gardeners are grown for their fragrant flowers. They come from China. The plant is invasive in 13 states and came to America in the 1740s.

Compared to other shrubs, this one is a menace to the ecosystem, especially in Florida. The vegetation has a brittle wood structure with weak roots that do not live long.

Furthermore, it is messy greenery that drops seedpods in the yard. 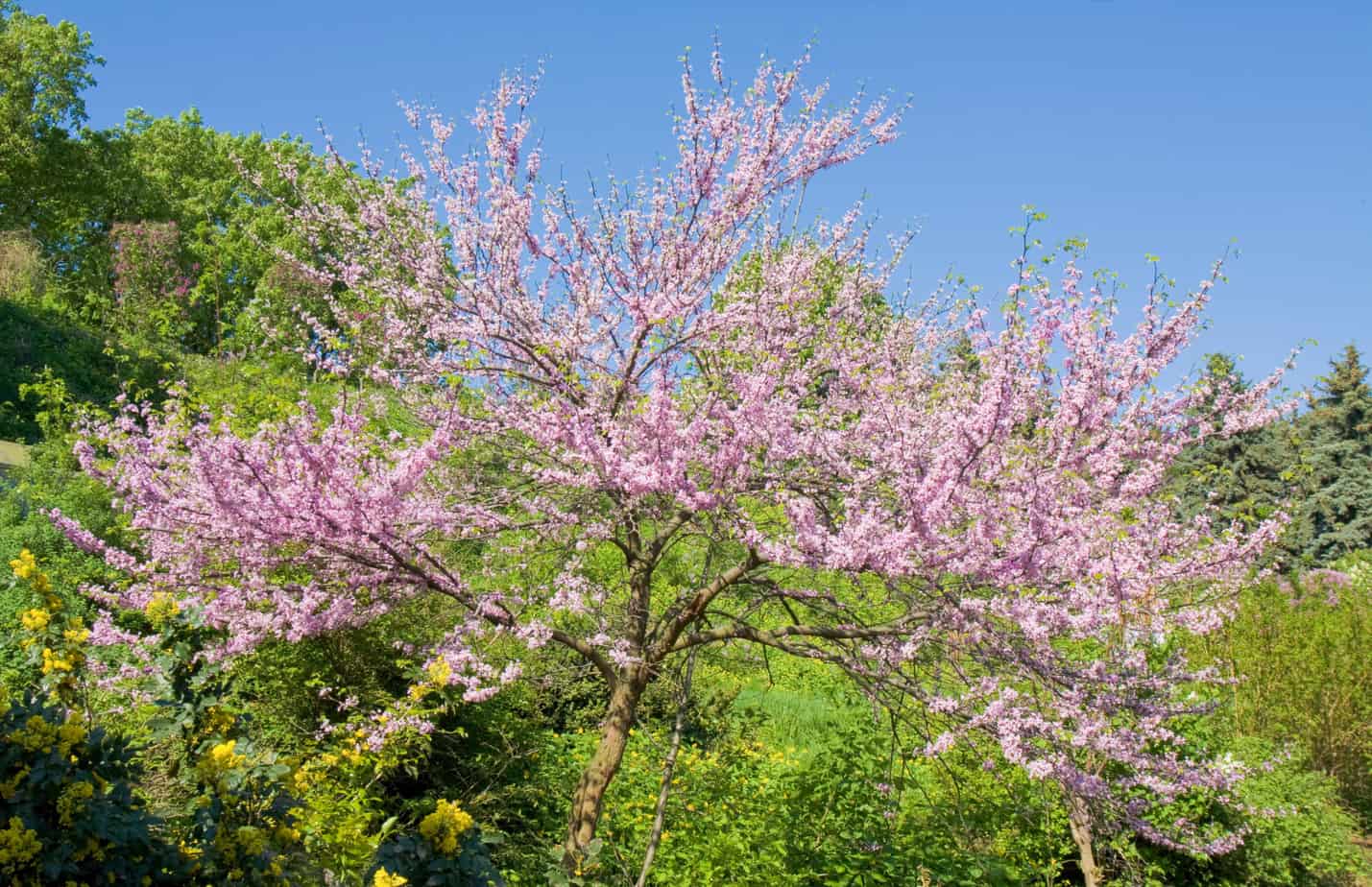 Our expert advice is to grow the redbud as it provides gorgeous spring blooms and are small trees that look fabulous in the landscaping without making a mess.

The tree is native to the eastern U.S., flourishing in zones 4 to 9. The reddish flower buds open up into pink blossoms at the beginning of spring.

The tree reaches up to 30 feet tall and makes a colorful display in a small garden. 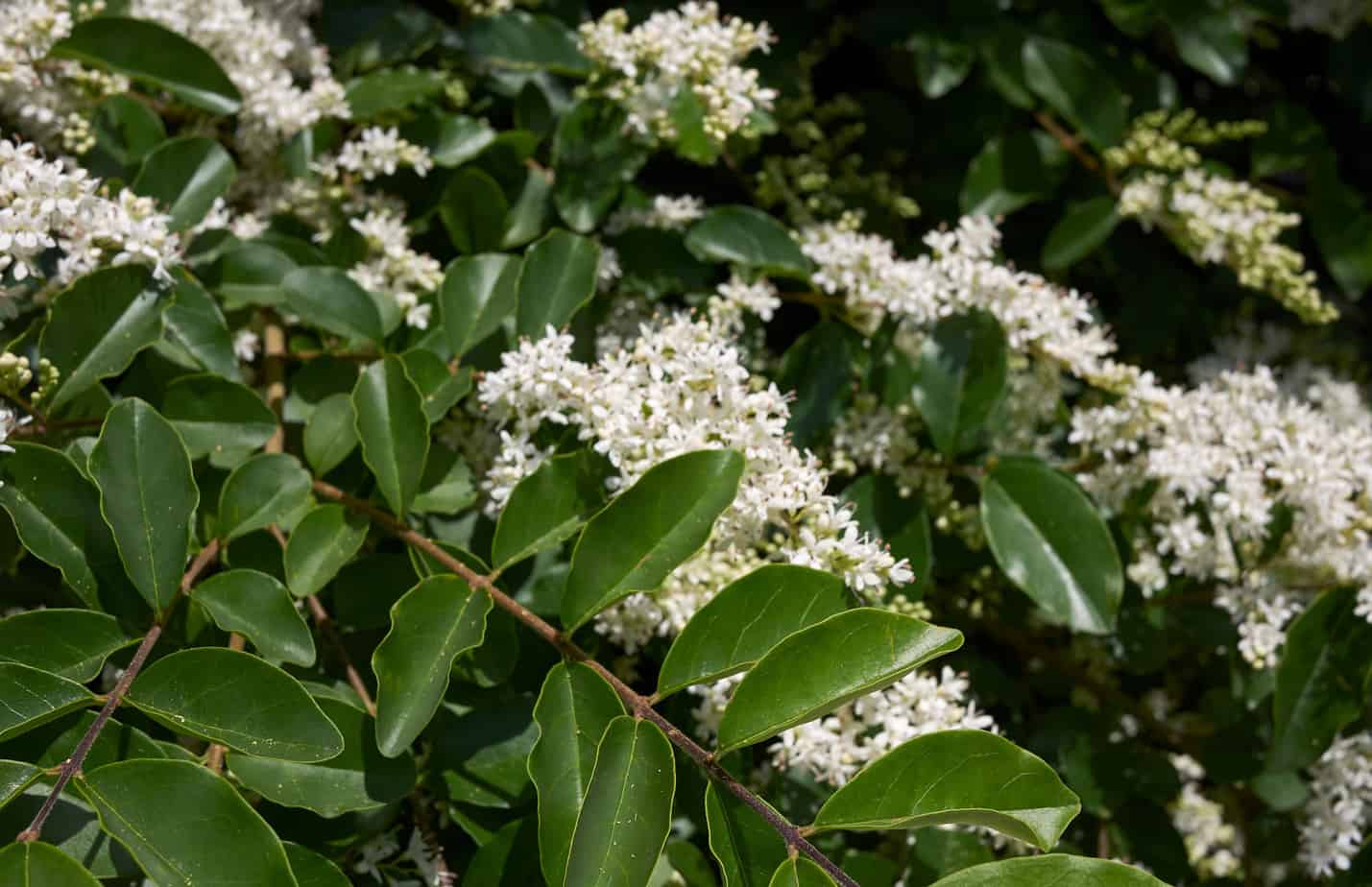 The privet is a small tree or evergreen shrub you find planted as a hedge. This is an awful shrub to have as it grows anywhere in full sun to dappled shade. Still, the soil can be dry or wet, and it grows.

The small tree comes from Asia, and people introduced it to America in the 1850s, becoming a fixture in most gardens. But, unfortunately, it is one of the worst weeds you can find in the South. The spreading form is like a weed, and you see them in the forests, roadsides; you name it, they are there.

The foliage forms a thick form choking out surrounding plants, and many people are allergic to the pollen when it blooms. 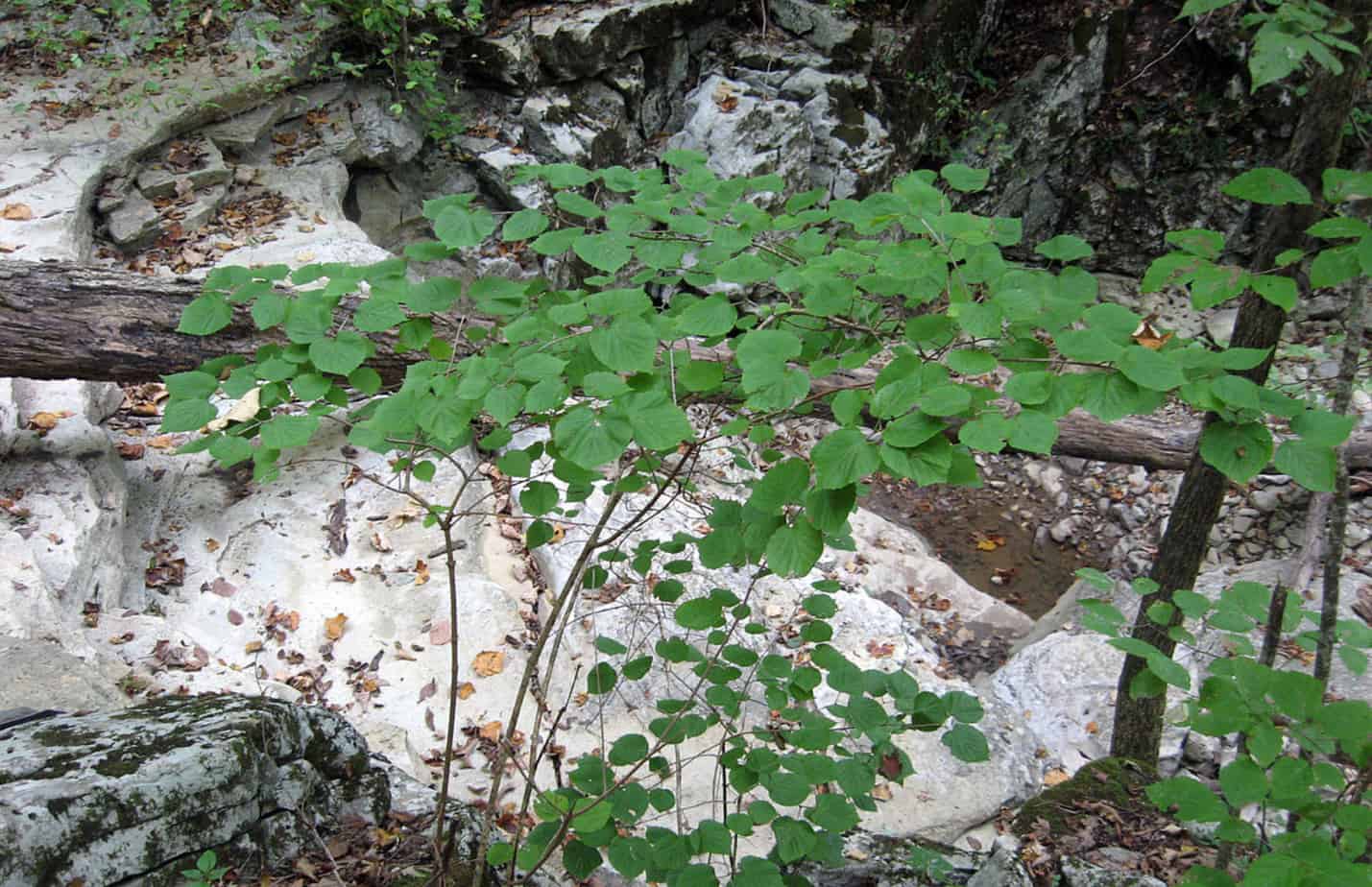 If you’re looking for native alternatives, invest your time caring for the limerick arrowwood instead. The foliage grows into a hedge providing privacy in the garden. It blooms white flowers with a fragrance.

The blooms attract pollinators like birds, bees, and butterflies. The greenery is native to the southern U.S. and part of the honeysuckle family. They are hardy in zones 6 to 8, growing up to 12 feet wide.

The limerock arrowwood you find listed as an endangered species in Tennessee and planting it will help with horticultural preservation. 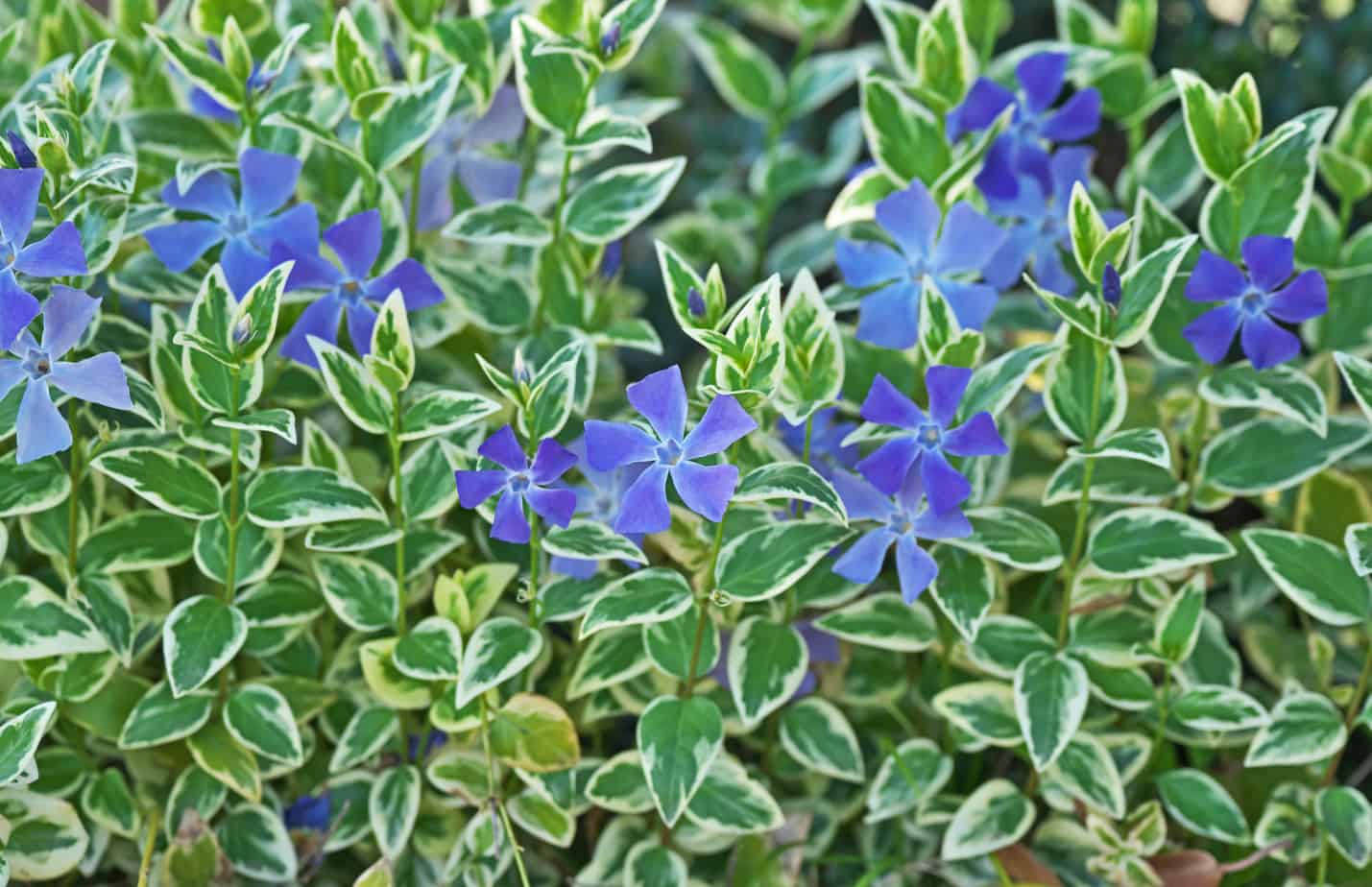 Another top invasive foliage in the South is this fast-growing groundcover called the periwinkle.

It has gorgeous purple blooms that grow in the shade. It originated from Europe and Africa and came to America in the 1700s.

It is rampant in most Southern regions and California, crowding other native foliage along the wetlands and forests. Furthermore, it carries a bacteria that is devastating to grapevines. 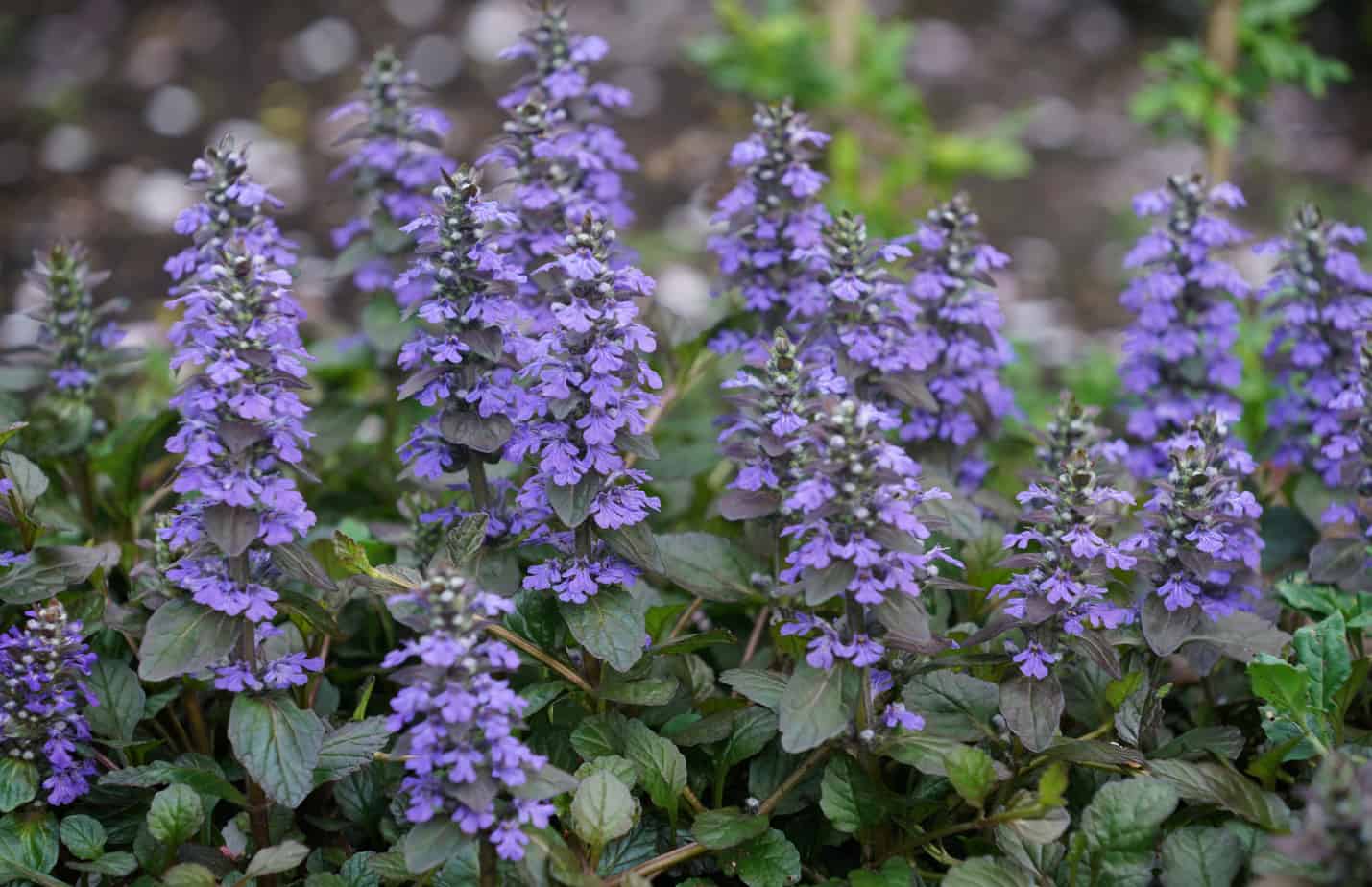 While the peacock ginger leaves have a burgundy to bronze tint that grows flat over the ground. You find them blooming in summer, producing a small purple flower. The carpet bugleweed you can grow in zones 4 to 9 and the peacock ginger in zones 8 to 11.