The Blue Plumbago is a hardy and easy-to-care-for shrub with a great tolerance for drought. An excellent outdoor plant choice for a groundcover in any landscape design.

What is Blue Plumbago?

The Blue plumbago (Plumbago auriculata), also known as Cape leadwort, Cape plumbago, and Plumbago capensis, is a flowering species and a member of the plant family Plumbaginaceae.

The specific epithet auriculata means “with ears”, to the shape of the leaves. Meanwhile, the name ‘Plumbago’ comes from the Latin word plumbum, which means lead. This is because, in the early days, the cape plumbago is used as a medicinal plant to treat lead poisoning.

The plumbago plants are native to South Africa. Considered fast-growing and have a sprawling habit. The arching and semi-woody branches enable the plant to later form into loose mounds. Its sprawling growth makes for an ideal ground cover and an additional texture for trellises.

The plant can grow up to 6 ft. in height but is typically trained to grow smaller for landscape purposes. The evergreen leaves are oblong and have an ‘ear-like’ shape, spanning at least 2 inches in length. Later on, the plant develops a pleasant cluster of phlox-like blue flowers. 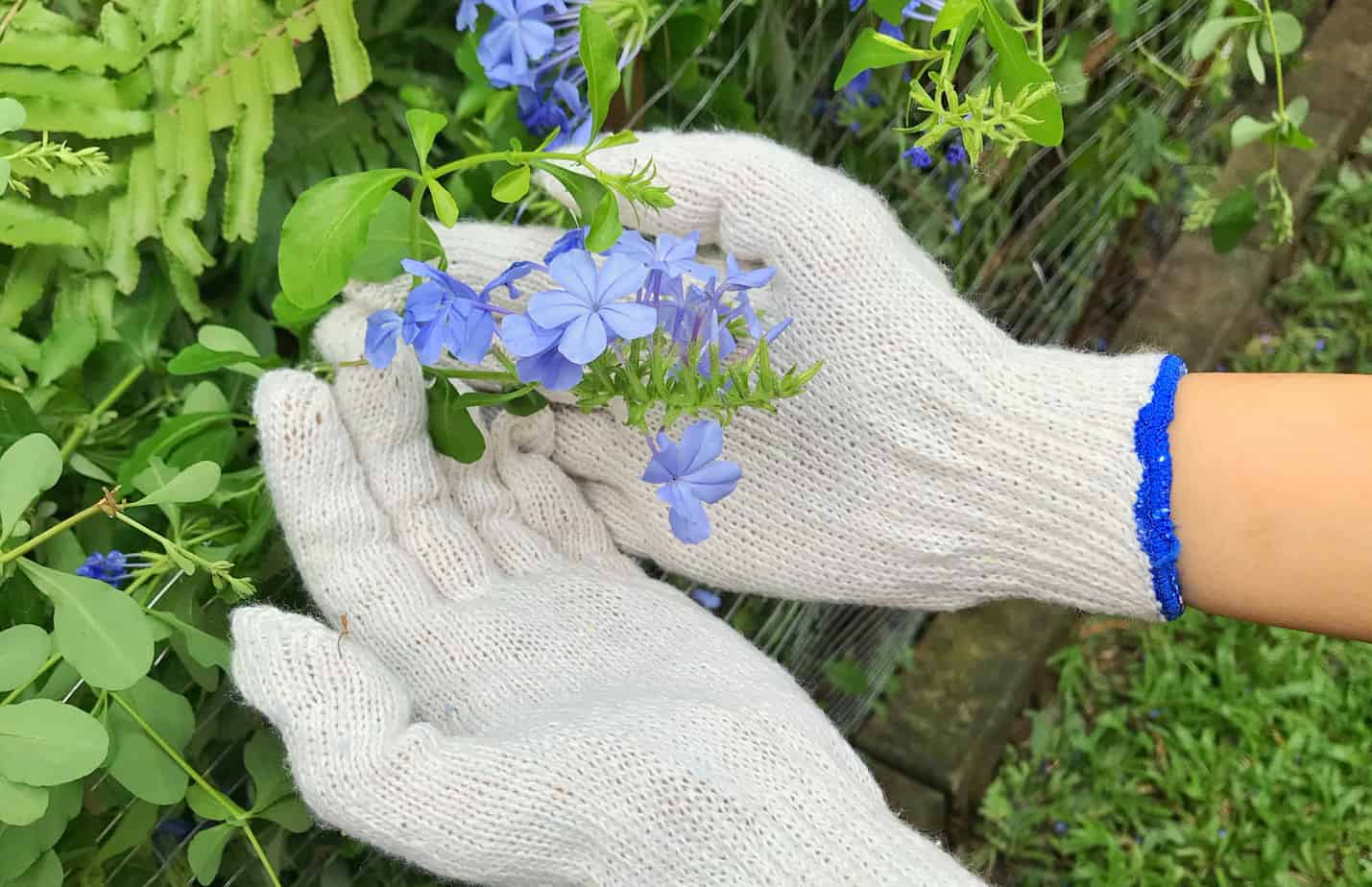 Grow plumbago plants optimally by placing them under partial shade, in well-draining soil, and by watering them thoroughly. Below are some other practical tips to equip you on your plumbago plant journey. Enjoy! 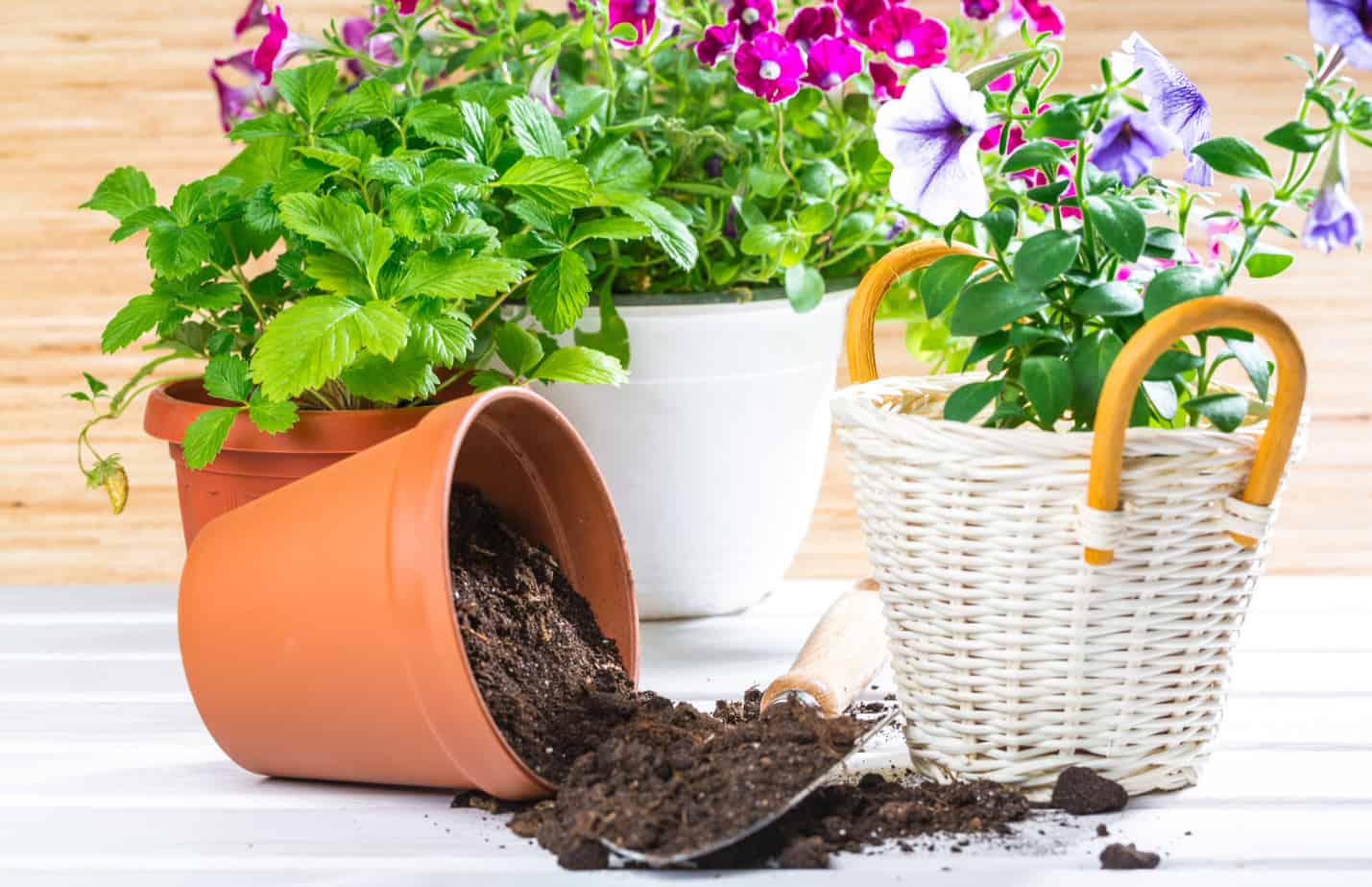 The Blue plumbago plants are ideally used in landscape gardens and they readily thrive in acidic to slightly alkaline substrates.

Moreover, growing plumbago plants involves the use of good, well-drained soil. An equal proportion of clayey soil and coarse sand makes for a good medium, especially for potted plants.

The addition of organic material such as peat moss can improve the retention of moisture while the addition of perlite will improve aeration. Both amendments can improve soil substructure translating to better growth and enhanced root system. 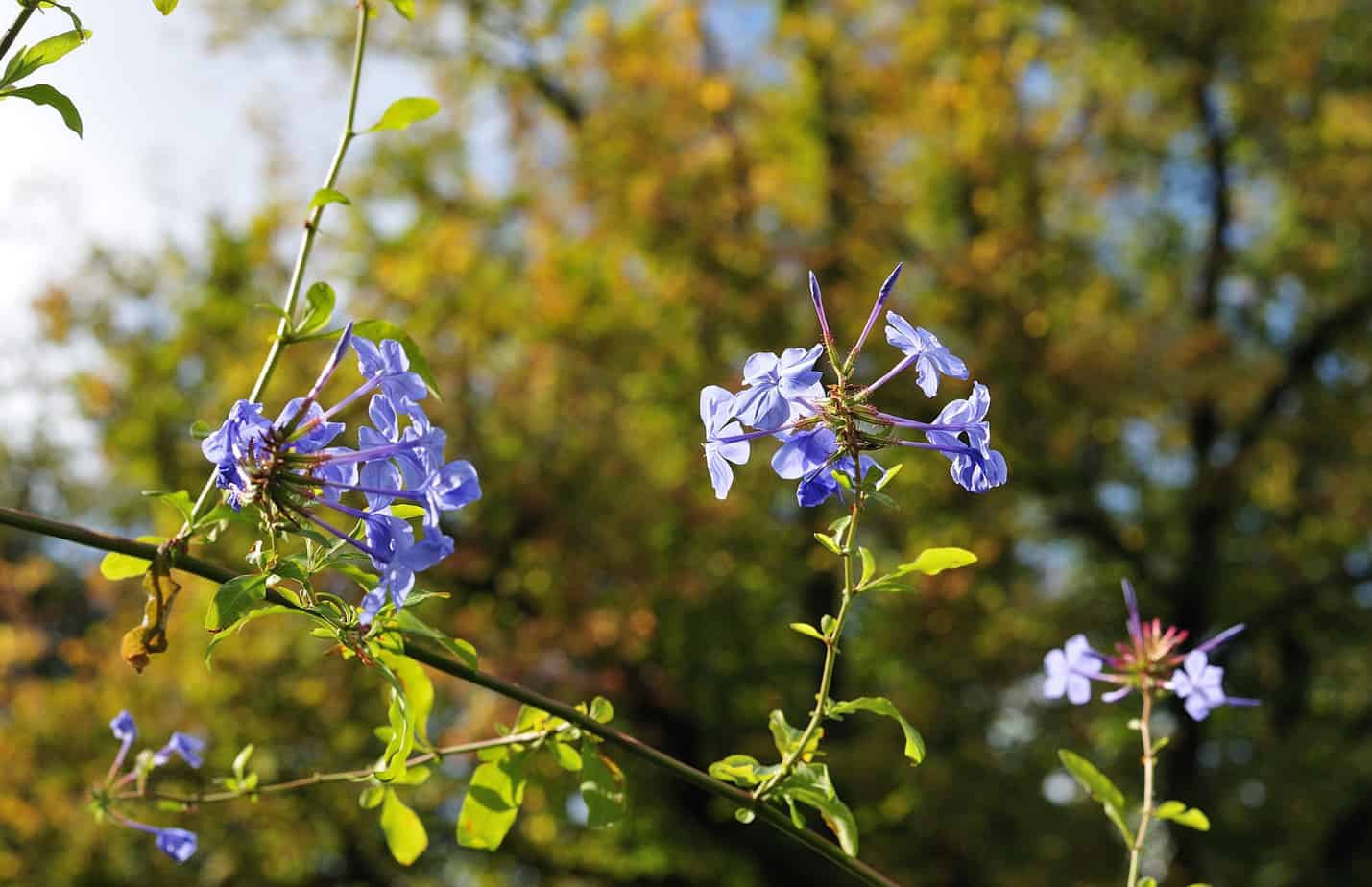 The Plumbago auriculata grows best under full sun to partially shaded conditions. When treated as an indoor plant, be sure to place them near a sunny window that receives an adequate amount of filtered light.

If grown outdoors, mainly for landscape purposes, choose a location that also gets some afternoon shade. Particularly in regions with warm climates.

The plant can also tolerate some prolonged periods of shade, but full sun exposure encourages the plants to develop more clusters of bluish to white flowers. 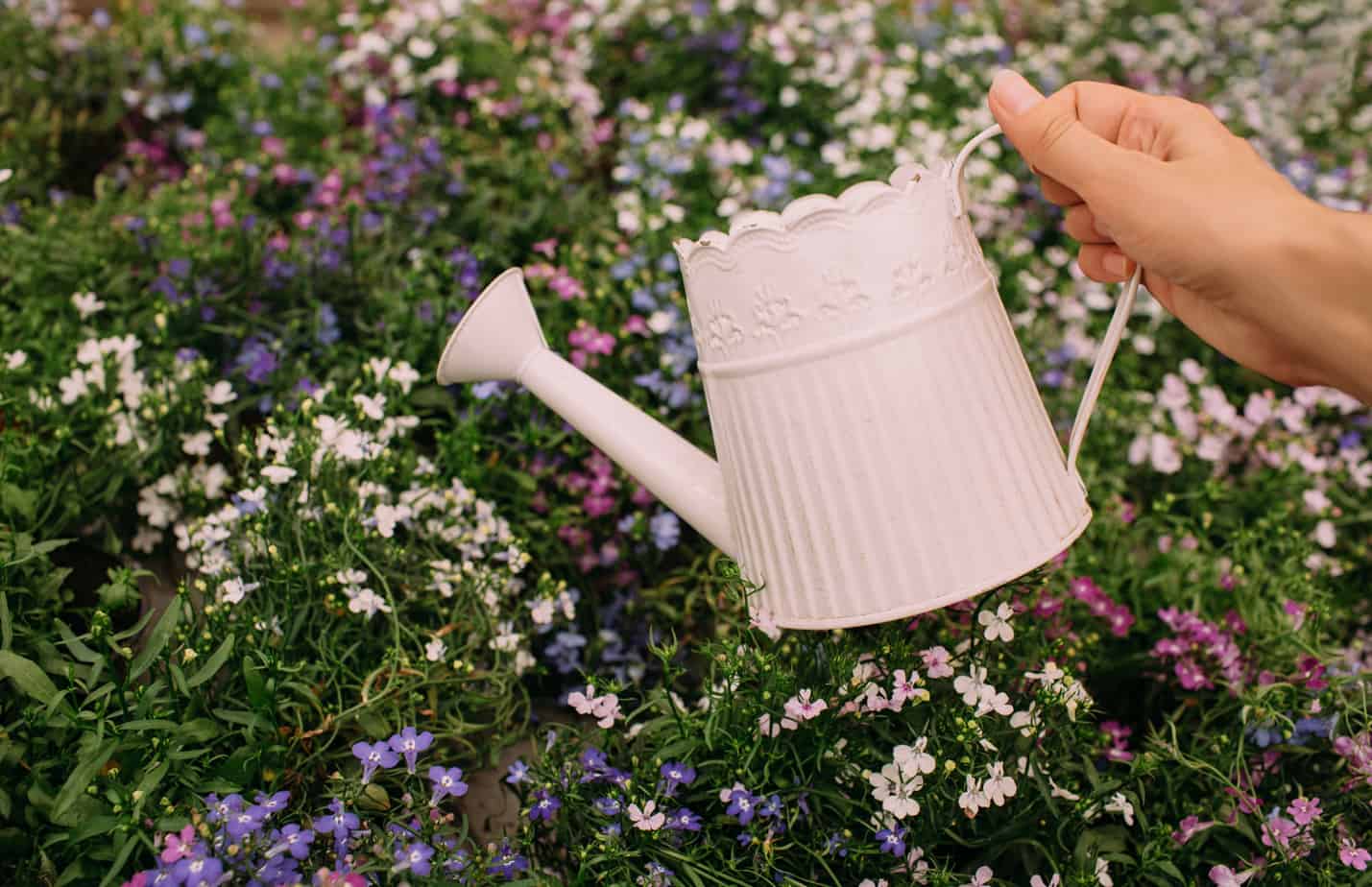 A newly planted Blue plumbago plant should be watered at least twice a week. This is crucial as the plant begins to establish its roots whether in a pot or a garden bed.

The cape plumbago plant exhibits a drought-tolerant quality, so water only when the top inch of the soil feels dry to the touch. Also, reduce watering during the winter months.

However, watering may be increased once the plumbago flowers start to develop. It is critical at this point to keep the soil moist but not soggy as this can cause root rot. 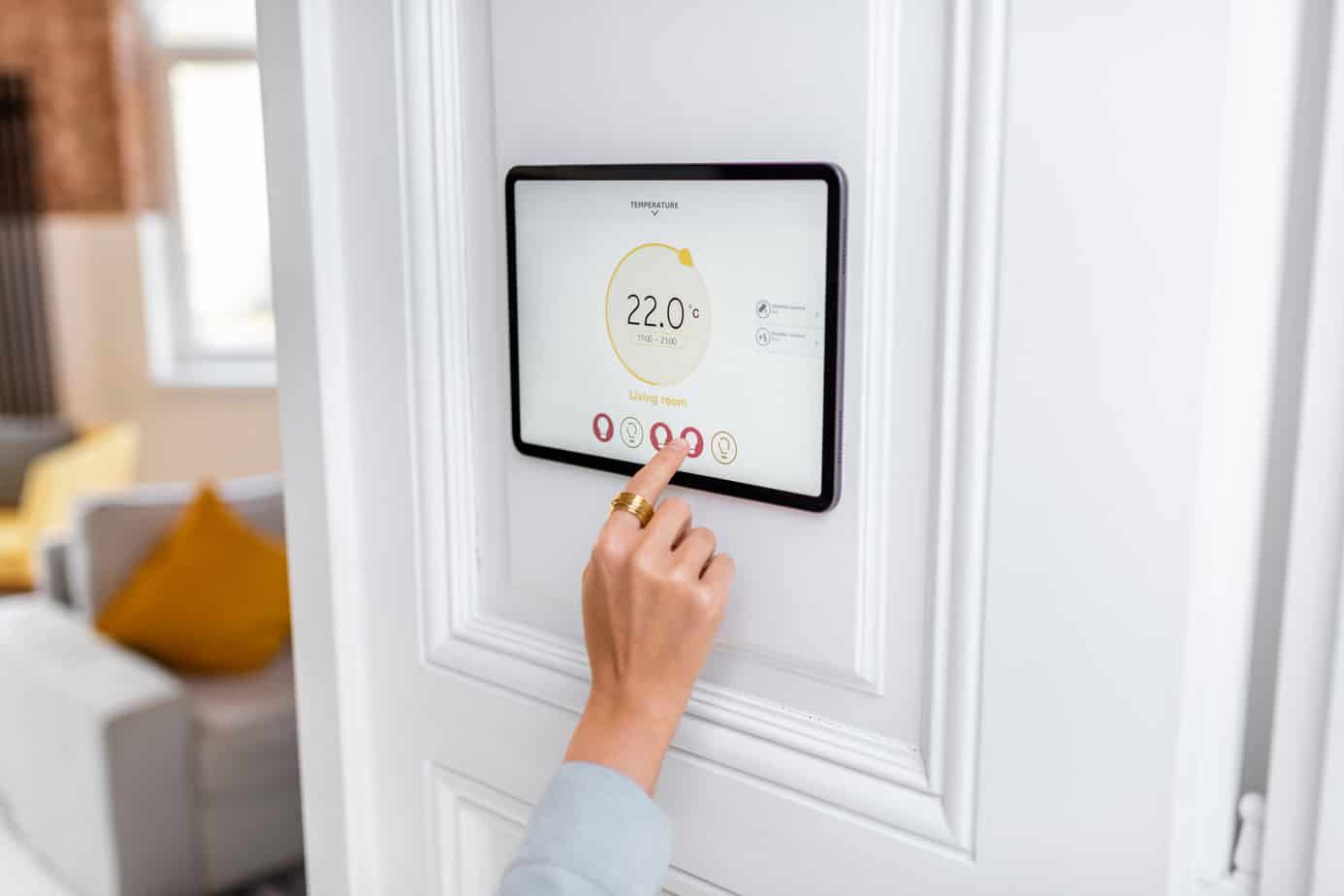 The optimum growth of the blue plumbago plant is attainable in USDA Hardiness zone 9-11. It adores warmer weather which is at least 60-80 degrees Fahrenheit (15 – 26 °C)

Although this evergreen shrub can handle a bit of a colder temperature, one must still avoid extreme colds because it is quite vulnerable to freezing injury. Particularly if temperatures drop below 32 °F (0°C). In light frost, the plant may lose some of its leaves, but they later grow back in spring.

A plumbago plant grows favorable under a humid climate. And this proves to be beneficial during the blooming period. The recommended humidity level for growing plumbago is at least 55 – 60 %.

As a houseplant, the plant may be raised in cooler climates. The typically dry air of most households can be corrected by the use of a humidifier and by setting up a pebble tray. 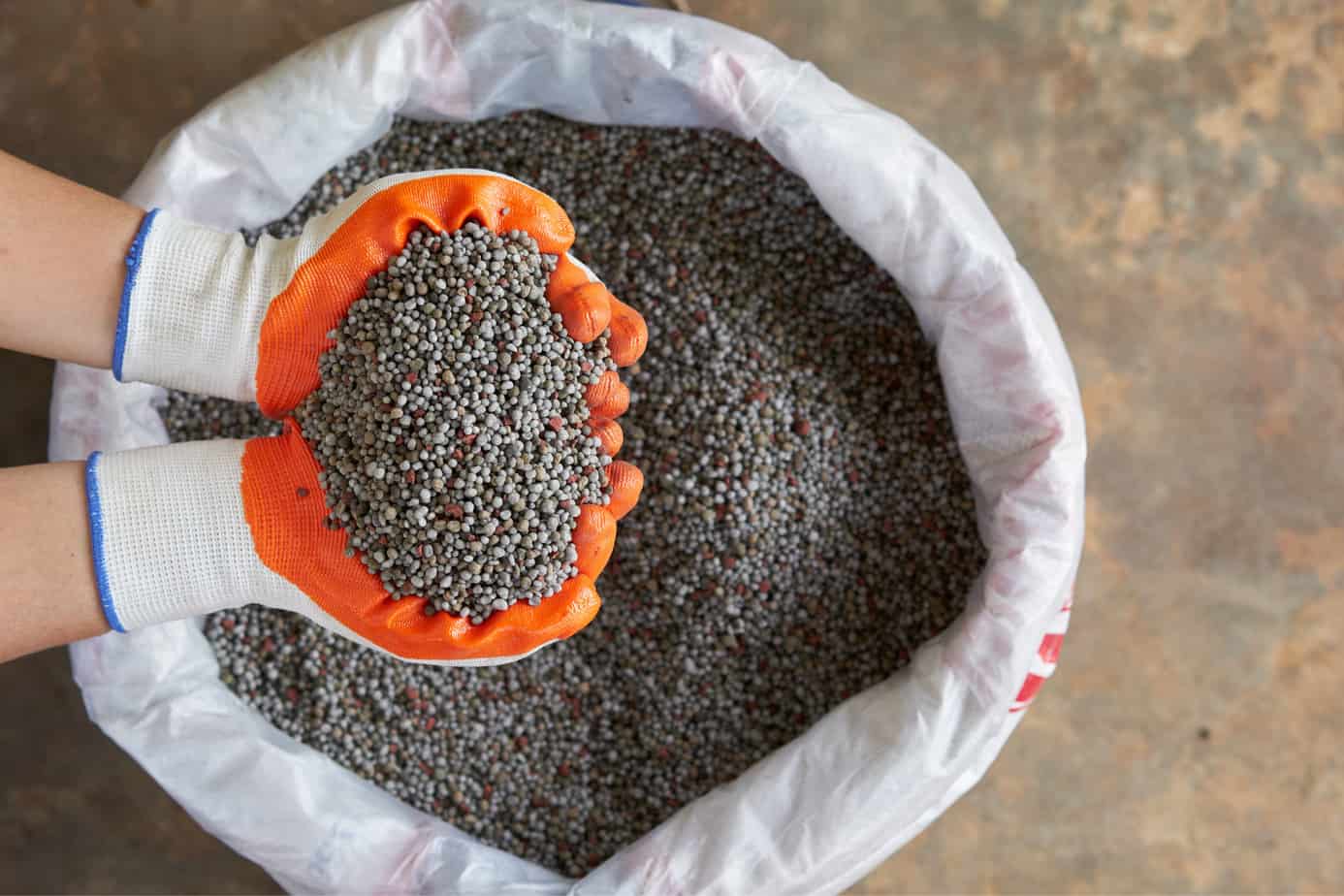 Fertilizing blue plumbago may not be as critical as compared to other houseplants. This is because the plant is considered a light feeder.

Any all-purpose and slow-release fertilizer works just fine. Apply twice a year, particularly during the growing season – which occurs most often in the early spring or summer.

Other varieties, including the ‘Imperial Blue’ plumbago benefit from regular feeding during the summer months, allowing it to produce more blooms.

There are several methods to propagate plumbago plants and the most common of which involve the use of root and stem cuttings, as well as seeds.

Seeds are best sown during early autumn, especially if will be used as ground cover for a garden landscape.

For stem cuttings, be sure to select a healthy stem with 3-4 leaves, and cut at least 2-3 inches long. You may also use a rooting hormone to hasten the root formation.

For root division, choose a plant at least 2-3 years old and split in fair volume. Water beforehand so the roots become hydrated. This will also make uprooting relatively easier.

Transfer to a small pot and make sure the potting soil stays moist but not soggy.

Seeds will germinate within 2-3 weeks, and cuttings may develop roots within 21-28 days. Oftentimes, propagation through the roots has a higher success rate.

Other tips: Transplant your new plumbago plants when the soil temperature is at least 50°F. Repot your old plumbago plants as the roots may become compacted over time. Transfer to a pot that is twice the size of its current container, and place under partial sun. 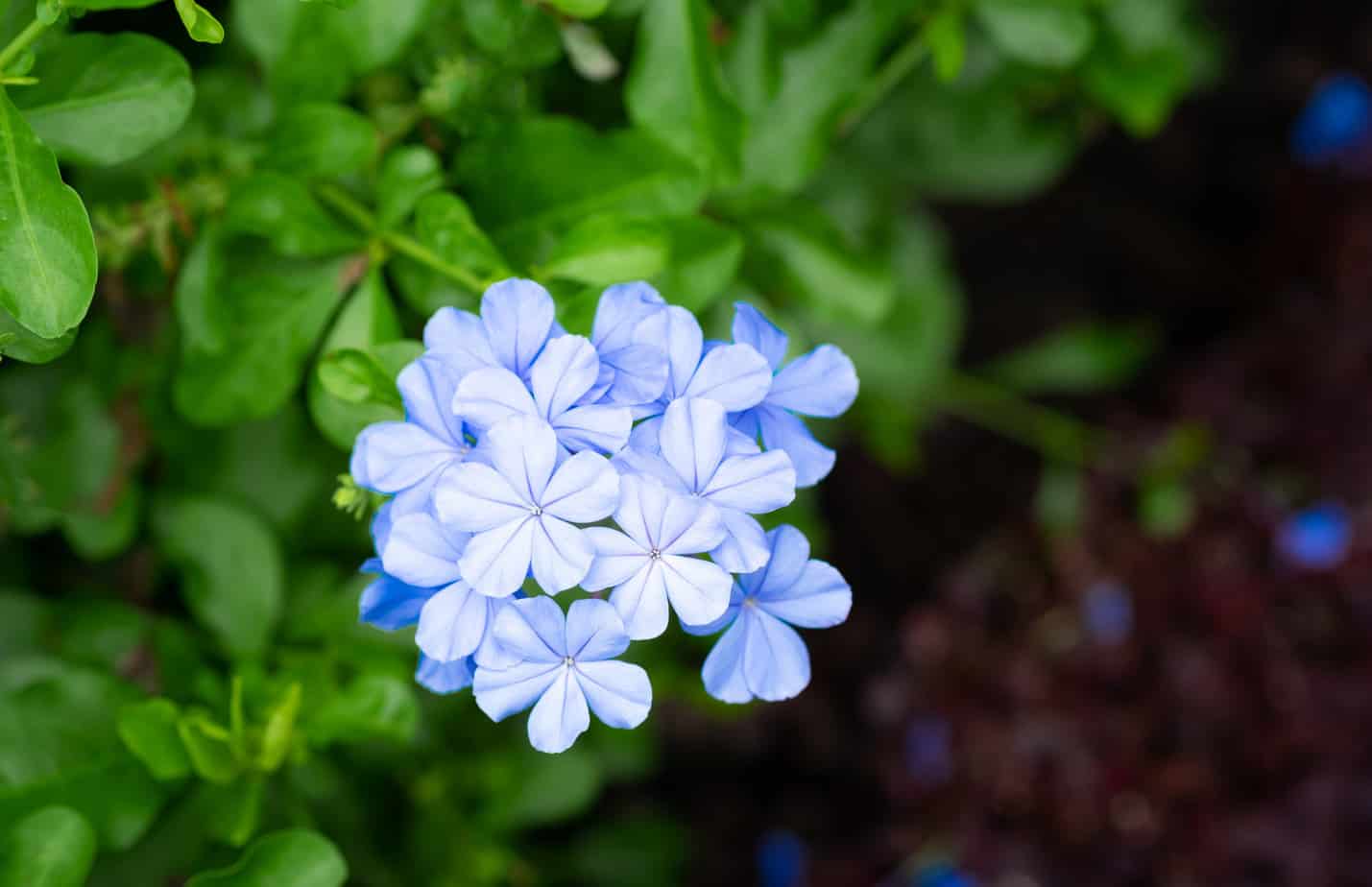 The Plumbago ‘Monott’ flaunts deep blue flowers, probably the deepest among other varieties. It can tolerate drought and thrives well in drier areas. The evergreen foliage is vigorous year-round and is eventually covered with flowers in the spring, forming a dense mound.

A moderate grower, the plant can reach up to 5 ft. tall and can spread up to 8 ft. wide. This plumbago plant is great for controlling erosion, hence typically used as a groundcover.

Other uses for the plant that you may find aesthetically pleasing are by growing it as a houseplant, in a hanging basket, and trellises. 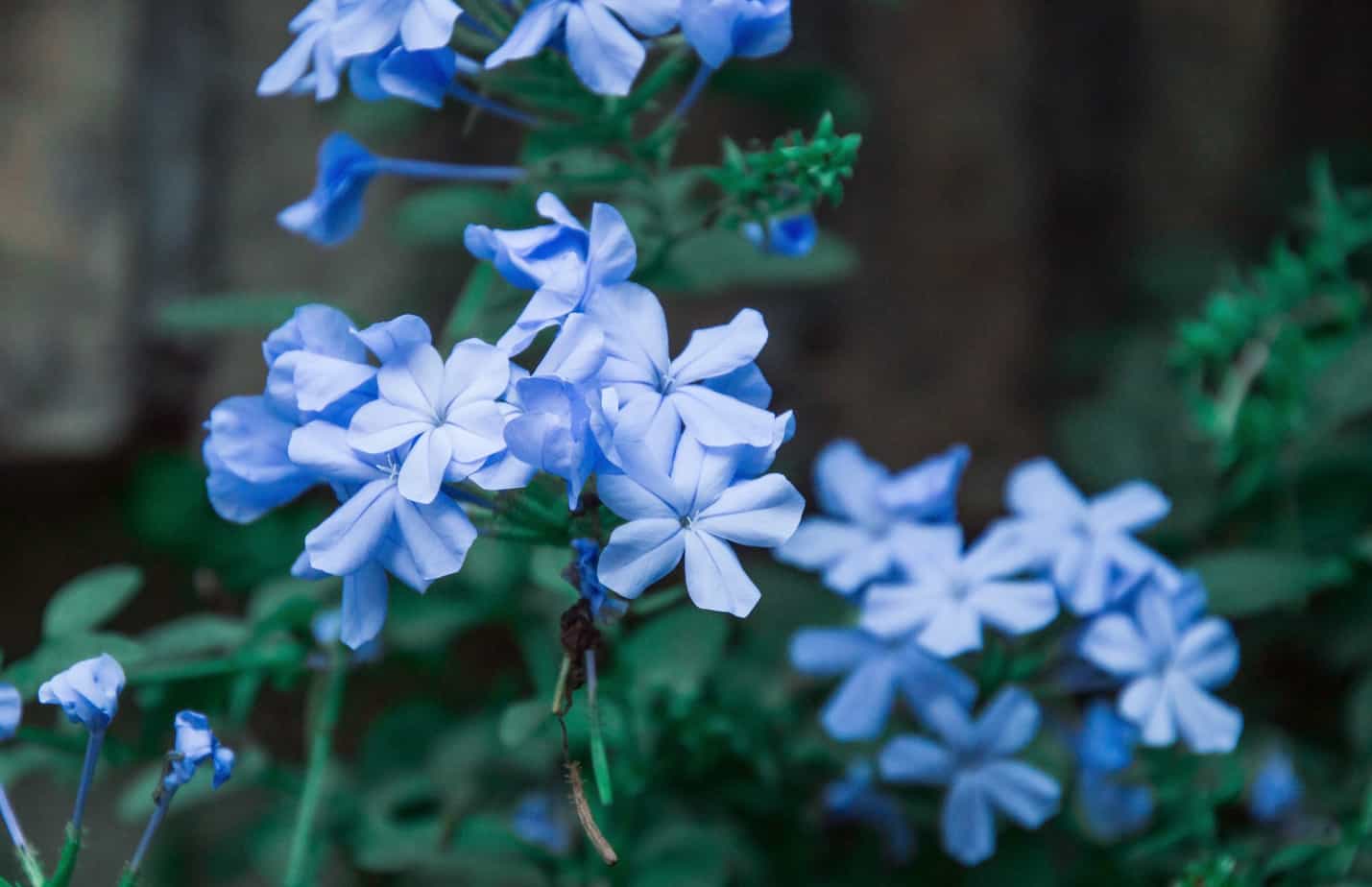 Tending to the Plumbago ‘Imperial blue’ may be relatively easy but its needs vary depending on the persisting local climate and season.

The plant’s bushy growth is ideal for planting in hedges and in covering slopes. This tender perennial grows well under full sun and is considered fast-growing, spanning to 5 ft. in both height and width.

The plumbago ‘imperial blue’ also features deep sky blue flowers that bloom throughout the summer. Ideally, pruning may be done in the early spring to induce flowering from new growth. Constant warmer temperatures may also encourage the plant to set bloom year-round.

While cultural management proves to influence the overall and long-term health of the Plumbago auriculata, some symptoms may occur which signifies the presence of garden pests and pathogens.

But rarely do plumbago suffers from a disease. Frequently, the cause of wilting, bud dropping and stem molds is related to either an ongoing or impending infestation. The most common pests that you may encounter are whiteflies, scale insects, spider mites, and larval insects, such as those of the Cassius blue butterfly.

Feeding insects, in their most severe form, can cause leaves to shrivel, turn brown and drop prematurely. These insects suck sap from the leaves, leaving wounds that may become a passageway for fungal and viral infection. If remain uncontrolled, they can weaken the plant and may lead to decaying tissues.

Why is my plumbago turning black?

In dry, and hot weather conditions, insects such as the spider mites proliferate, causing symptoms like leaf bronzing, shriveling, and browning which may darken the leaves even more. However, the lifeless appearance and a rather pale color may also be attributed to overwatering.

Why do plumbago leaves turn yellow?

The yellowing or chlorosis of the Plumbago auriculata may be associated with several factors in all aspects of plant growth. For example, poor drainage may damage the plant’s root system leading to chlorosis and decay of tissues. Others include freezing temperatures, compacted roots, high alkalinity, and nutrient deficiency.

Do you cut back plumbago for winter?

In the late winter, garden-grown Blue plumbago should be cut back to at least 6 to 12 inches. This will encourage more bushy growth at the onset of spring. The plant may also be cut back by half in the middle of the growing season to control its size and maintain its shape. This is usually done for landscaping purposes.

Where can I buy Blue plumbago?

Plantly offers a great selection of garden plants and houseplants that will suit your needs! Be sure to explore our best offerings for indoor and outdoor plants.

I’m a graduate student taking horticulture and have taught fundamentals of crop science at a university. As an agriculturist, my field of interests is with climate smart gardening and community development. I certainly enjoy a platform where I can share my knowledge to fellow plant enthusiasts and gardeners as they embark on a journey with their green, leafy and mighty friends!